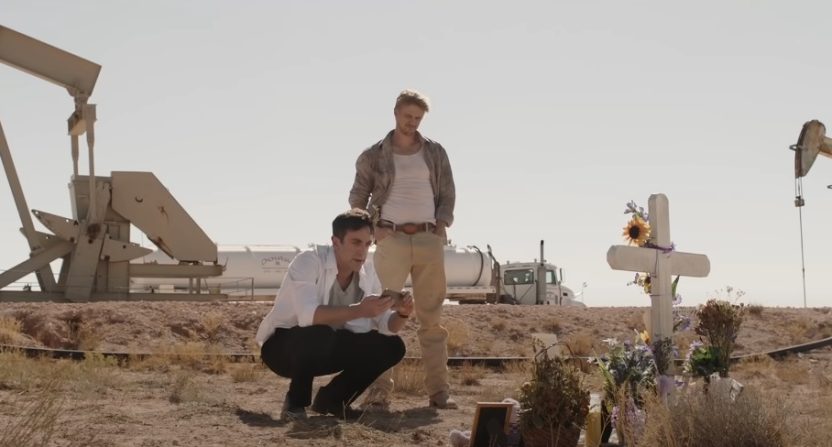 Nope isn’t as easily digestible as Jordan Peele’s other impressive works: Get Out and Us. And it’s not as good as those other two. However, it says a lot about the writer/director that his third-best movie was still better than most of the new releases in 2022. If you’re a student of cinema, you’ll appreciate the attention to detail. If not, you might miss some of the references. Either way, Nope is a wild sci-fi ride. As per usual, Peele likes to use horror to tell bigger stories. What exactly that is, is up to your interpretation. It might be about African Americans trying to reclaim their legacy in Hollywood.

Tom Cruise bet on himself and won in a big way. Top Gun: Maverick is not only the highest-grossing film of 2022, but it’s also the highest grossing of Cruise’s career. The long-anticipated sequel to Top Gun (1986) has brought in a staggering $1.4 billion worldwide, making it 11th all-time. The original release date was postponed numerous times and was supposed to finally hit theatres in 2020. Then the pandemic hit. Unlike others, Cruise resisted the temptation to send his passion project straight to streaming. Instead, he waited and was rewarded financially and critically. Top Gun: Maverick is the rare blockbuster that has a strong chance to be a Best Picture nominee because it’s a well-made crowd-pleaser.

Quote: “Your friendship is more valuable than this life.”

The best superhero movie of 2022 was not made by Marvel or DC. Don’t be intimidated by the three-hour run time. RRR is a visually striking living comic book. One part musical, one part colonialism drama, one part action flick, it’s a fast-paced thriller. Director S. S. Rajamouli’s epic fictional journey is based on two real people: historical figures Alluri Sitarama Raju (Ram Charan Teja) and Komaram Bheem (N.T. Rama Rao Jr.), who battled British tyranny in the 1920s. This swashbuckling tale has it all: dance battles, romance, comic relief, and a dude throwing a leopard at another man. (Yep, that’s right).

Quote: “Have you ever wanted something, so badly you cannot breathe?”

Officially, Cyrano came out in 2021, but it wasn’t released in America until late Feb. 2022, so it’s eligible for this list. Director Joe Wright tells an old story in a new way. This most recent version of Edmond Rostand’s 1897 play Cyrano de Bergerac is a lovely musical filled with romance and heartbreak. Peter Dinklage (Cyrano) and Haley Bennett (Roxanne) are an absolute delight in every scene. In the original story, Cyrano is self-conscious about his large nose. In this updated version, there is an obvious height difference. Based on screenwriter Erica Schmidt’s 2018 stage musical, Cyrano looks at all the ways we struggle to express love and how sometimes we feel like we’re unworthy of love.

Quote: “If we only allowed angels to be customers, soon we’d have no customers at all.”

The Outfit is a well-crafted thriller that feels like a play. The always exceptional Mark Rylance plays a mild-mannered high-end clothing shop owner in 1950s Chicago who’s trying to survive a very bad night. His clients include the mob, who in most movies are usually exceptionally dressed. Leonard (Rylance) is not a tailor but rather a “cutter”— the person who takes measurements, cuts the cloth, and sews together the pieces of a suit. It’s a distinction that Leonard explains throughout the film. He loves his job, but there can be occupational hazards when working for dangerous people. Leonard has to use his wits and his shears to stay alive.

Quote: “The fresher the meat, the better. So I’m going to keep you alive as long as I can.”

Mimi Cave’s directorial debut is memorable and reminiscent of Jordan Peele’s Get Out. She brings energy and attitude to Lauryn Kahn’s lively screenplay, which examines modern dating and misogyny. Fresh is a standout dark comedy that might not be for everyone but hits all the right notes when exploring how terrible some men can be. Noa (Daisy Edgar-Jones) is exasperated until she meets charming Steve (Sebastian Stan) in the produce aisle of a grocery store. He seems too good to be true because, of course, he is. There’s a catch to this catch, and it’s jarring. Some may be turned off by the details, but Fresh is a welcome original premise.

4. The Banshees of Inisherin

Quote: “‘But you liked me yesterday.”

There haven’t been many films about male friendships. The Banshees of Inisherin focuses on the breakup of best buds Pádraic (Colin Farrell in an Oscar-worthy lead performance) and Colm (Brendan Gleeson). What makes this Irish dramedy fascinating is the reason behind the split. Not a love triangle or a feud based on an old wound. No. Colm suddenly decides that he no longer wants to be friends. He’s grown weary of Pádraic’s company and wants to spend time on his music. The more Pádraic tries to reconcile with his former bestie, the more annoyed Colm becomes. The first pairing of Farrell and Gleeson since In Bruges (2008) is worth the wait.

Quote: “When I’m with you, I feel so alive, and I feel so special. But that’s because it’s all possibility. We’re not in a relationship.”

Transitioning from college life to the real world is awkward, especially when you’re not sure what you want to be when you grow up. Andrew (Cooper Raiff) is in no rush to enter full-time adulthood. To escape, he starts a part-time gig as a professional party starter on the bar and bat mitzvah circuit. While having fun, he meets an engaged older woman, Domino (Dakota Johnson), and her autistic teen daughter Lola (a fabulous Vanessa Burghardt, who’s autistic in real life). This unlikely pairing could have been a simple romantic comedy. But Cha Cha Real Smooth has a lot more depth. This is the follow-up to Raiff’s 2020 indie hit Sh*thouse. The actor, director, and screenwriter excels in showing how people connect.

Available: Only in theatres

Quote: “Tonight will be madness.”

Fine dining has always been about much more than food. You crave an experience, something to savor. The Menu serves up an evening that none of its diners will forget. This biting dark satire surprises at every turn. Kudos to director Mark Mylod and screenwriters Seth Reiss and Will Tracy, who deliver a story that goes far beyond a night at an exclusive restaurant. The Menu is a critique of critiques, examining the entitlement that some feel when it comes to judging others. Everyone has an opinion, and celebrity chef Julian Slowik (Ralph Fiennes) can’t stomach their takes. He’s going to dish out his own beliefs with dire consequences for his guests.

The Oscars will probably ignore Vengeance, and that’s a damn shame. B. J. Novak’s directorial debut is everything a Best Picture nominee should be: thoughtful, moving, and enlightening. Novak, who also wrote the screenplay, created a true-crime satire with plenty to say about America and the preconceived notions that continue to divide us. Blue State vs. Red State tribalism has become such an accepted norm that we’ve forgotten to look for commonalities.

Novak tells a story about our obsession with culture clashes. Novak plays Ben, a New York City writer who decides to do a podcast on the suspicious death of a Texas woman with whom he had a brief affair. Ben thinks he knows where this mystery is heading, when in reality, he has no clue.