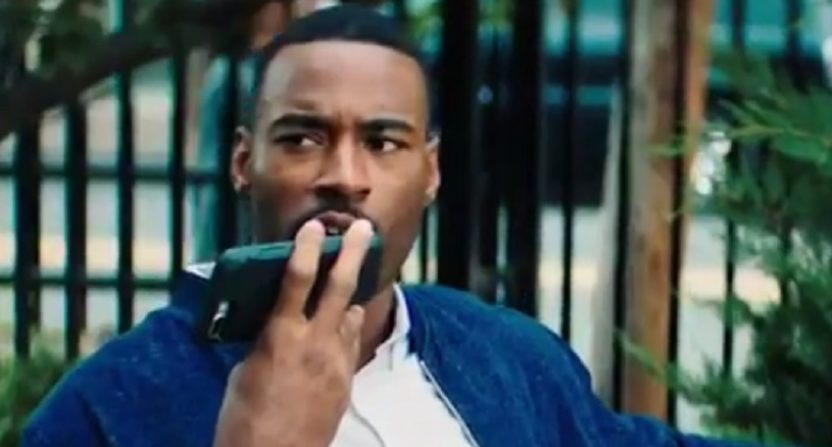 With the exception of a turn on Dancing with the Stars last year, former Detroit Lions receiver Calvin Johnson has seemingly retired into a quiet, contact-free civilian life. But thanks to Johnson’s nickname of Megatron during his playing days, someone won’t quite let Johnson live comfortably without harassment.

Johnson was nicknamed “Megatron” by teammate Roy Williams during his rookie season in 2007, when the Lions’ incumbent starting wideout couldn’t believe the physical specimen that the team had just drafted out of Georgia Tech. (Not even Matt Millen could mess up that selection. At least one of his wide receiver picks panned out. Though Williams wasn’t too bad, either.) The name seemed kind of silly, but fans loved it and Johnson himself eventually embraced it.

Now, however, that Megatron nickname might be a burden, as seen in a new ad for Transformers: The Last Knight that Johnson debuted on his Instagram account. Apparently, Optimus Prime — the famed heroic leader of the Autobots — doesn’t like the idea of his hated rival enjoying a life of enjoying coffee, time with friends and drive-thru cheeseburgers. Someone needs to tell Optimus that this Megatron isn’t the leader of the evil Decepticons. Take a look:

I’ve always loved my nickname, but I think this Optimus Prime dude has me confused for some other Megatron. #Transformers #ad

Great work by the voice of Optimus Prime, Peter Cullen, in that ad. Never has the simple act of ordering a cheeseburger seemed so nefarious than when Optimus is in pursuit.

As a Lions fan, I continue to marvel at the personality that Johnson has showed since leaving his NFL days behind. Some might say that he’s now unburdened by having to play for a historically inept franchise for which he repeatedly sacrificed his body. The Lions and Johnson reportedly didn’t end things on terribly good terms either, with the receiver having to pay back some of his signing bonus after retiring. But maybe he just didn’t enjoy the exercise of having to talk to the media either.

Johnson does seem to be enjoying some of the spotlight now that he’s not getting beaten up regularly on a NFL field. Maybe he has a future in broadcasting or acting, based on what he’s shown in recent months. That is, if Optimus Prime will only leave him alone. A man deserves to eat a cheeseburger in peace.