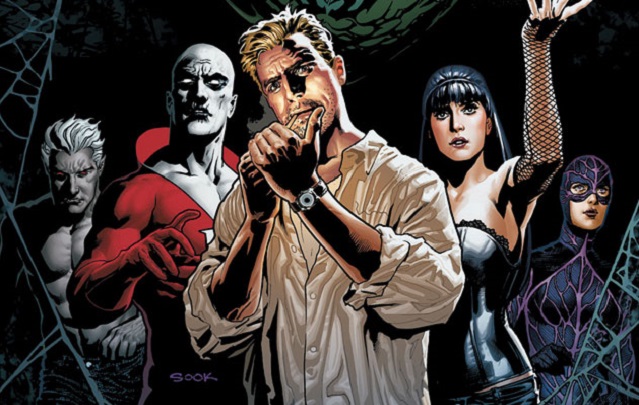 Depending on your view, building a superhero blockbuster around B-list characters didn’t work so well for Warner Brothers and DC Films this year. Yet the studio has plans to develop another project around even lesser known characters whose popularity among comic book fans might even be arguable.

On Wednesday, Variety‘s Justin Kroll reported that Doug Liman (The Bourne Identity) has signed on to direct Dark Universe — or Justice League Dark — for the studio. The film features several of DC Comics’ supernatural characters, including John Constantine (previously seen in a standalone movie and NBC TV series), Swamp Thing, Deadman, Zatanna and Etrigan the Demon.

Given that Marvel is going to release Doctor Strange in November, maybe going from the fantastic to the supernatural is the next step for superhero films looking to raise storytelling stakes and shift creative terrain. This project has been in development for a while, so it’s not a matter of DC following Marvel’s lead. Guillermo Del Toro (Crimson Peak) had been attached, and his horror/fantasy sensibilities seemed perfectly suited to such a film. But his creative plate is overflowing, which forced him to step away. DC Films is obviously determined to make the movie, however.

As a way of putting toes in the water, a DC Universe Original Animated film featuring the supernatural ensemble is scheduled to be released later this year.

Liman is a curious choice for such a project, given that most of his filmography consists of action and sci-fi thrillers. But his 2008 film Jumper was something of a comic book movie, based on a sci-fi novel. He also directed 2014’s excellent Edge of Tomorrow, starring Tom Cruise and Emily Blunt, which further demonstrated an ability to helm a epic sci-film with a wide scope.

The director was previously attached to the X-Men project Gambit, starring Channing Tatum, for Fox, which appeared to be a good fit for his sensibilities if he was going to make a superhero film. But development on that film has stalled, reportedly due to script problems. Liman had already been the second director linked to Gambit, replacing Rupert Wyatt (Rise of the Planet of the Apes), who jumped off nearly a year ago. The continued snags obviously compelled him to move on as well.

However, Liman was apparently still interested in doing a superhero movie. Or whatever it is that Justice League Dark will end up being. With a director like Del Toro, such a movie may have been creepy and moody, while also providing supernatural spectacle. He did just that with his two Hellboy films, in addition to Blade II. Maybe his Pacific Rim should be included in that sentence too. But his Spanish films were horror projects. With Liman, the project could end up being more of a straight action movie, though he could very well be interested in making a different sort of film, exploring mystical elements that he hasn’t in previous efforts.

But more surprising than signing Liman to direct a movie featuring DC Comics’ magic-based characters is that Warner Bros. wants to move forward with such a project in the first place. Yes, at one point, with superhero fatigue a real concern among moviegoers and even some of the geek audience, exploring another part of the DC Universe seemed like a good idea.

Constantine has proven to have a somewhat resilient popularity, inspiring the 2005 Keanu Reeves film, the 2014-15 NBC series (starring Matt Ryan in a version much more faithful to the comic books) and even a guest appearance on season four of The CW’s Arrow. Swamp Thing headlined two 1980s cult horror films, along with a TV show and cartoon in the 1990s. Zatanna made guest appearances during the last three seasons of The CW’s Smallville. So there are some brands that might yield some recognition among wider audiences. But how many people will go to the movies for those names? (I mean, I will because I collected Swamp Thing comics as a kid, but I don’t have $800 million to spare. And I doubt there are enough of me to compile that total either.)

Warner Brothers and DC Films tried building a movie around secondary characters that mainstream audiences weren’t familiar with, hoping to make a more unconventional superhero movie. But at least there was a hook with the so-called heroes of that movie being bad guys. And just in case people weren’t buying it, Will Smith was cast to provide some star power. Margot Robbie helped with that too, and Tom Hardy would have also, if he hadn’t dropped out because of The Revenant running over schedule.

Suicide Squad has grossed $580 million worldwide against a reported $175 million budget. That would appear to make it a success. Yet as Mashable’s Jeff Sneider pointed out on last week’s Meet the Movie Press vodcast (at the 23:10 mark), the general formula to determine whether or not a movie made a profit is to take its production budget ($175 million in this case) and marketing budget (reportedly $150 million) and multiply that by two, which equals $325 million. So to break even, Suicide Squad needs to make $650 million worldwide.

That’s still possible, and Warner Bros. might have enough creative capital — especially if characters like Harley Quinn and Joker are used in other DC Comics films, like Ben Affleck’s standalone Batman movie — invested to greenlight a sequel. But negative critical and fan buzz killed the chances of Suicide Squad being a huge hit for the studio, and the presumption would be that Warner and DC might be reluctant to take another chance on projects that don’t involve iconic characters or even B-list properties that could possibly headline a film.

Justice League Dark seems to be a much bigger risk. Suicide Squad benefited by adding The Joker to its ensemble, which opened the door for a Batman cameo appearance. And if all else failed, it could have been an over-the-top action movie. However, one of the mistakes writer-director David Ayer made was turning the climactic battle of the film into an effects-driven mess that failed to utilized the acting talent he cast. A movie centered around magic and the supernatural is sure to be heavily dependent on effects. Can Liman avoid a decisive scene which doesn’t involve actors standing in front of a green screen, waving their arms around and gesturing dramatically while visual effects specialists add in all the wizardry in post-production?

Maybe Liman received an offer he couldn’t refuse, especially if it means the studio will interfere less than it reportedly did with Suicide Squad. Maybe there’s even a star or two circling this project that would make this notable. And since these supernatural characters operate in very different territory than Superman, Batman, Wonder Woman and DC Films’ other big-ticket properties, maybe Liman will generally be left alone and won’t have the pressure of making a movie expected to gross $1 billion internationally. He’s a good director and a strong choice for Warner Brothers on a risky property.

If Liman makes a hit out of this, he may be even better than anyone would have guessed.