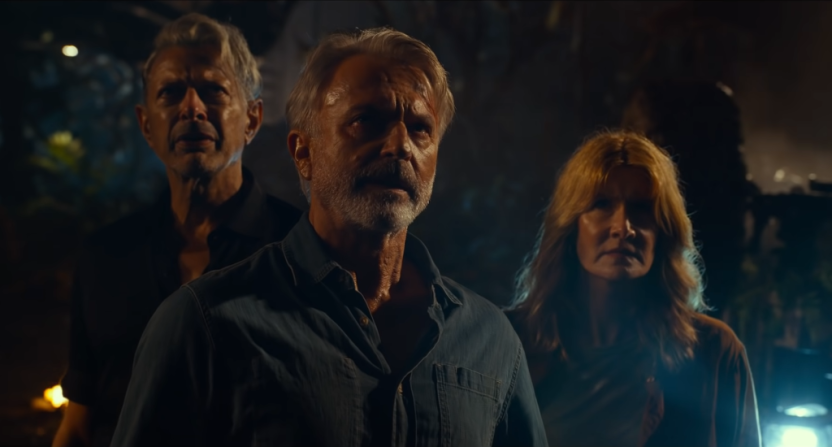 Universal Pictures is getting the band back together for the latest installment of the franchise. Jurassic World: Dominion, which opens Thursday night, unites the old cast members with the new ones.

Hopefully, this version will be considerably better than that 2001 release. Jurassic Park III was so bad that its lasting legacy is a meme. The movie, while financially successful, is best remembered for the comically awful dream sequence of the velociraptor yelling “Alan!” That ill-advised scene was not only the low moment of the beloved franchise; it represented how this lousy cash grab put Jurassic Park on the verge of extinction until it was rebooted in 2015.

The instant rejection of Jurassic Park III had a lot to do with our emotional ties to the original. We loved —and still love —Jurassic Park. If you’re old enough, you remember the joy of seeing these believable CGI dinosaurs in 1993. A landmark moment in cinematic history that captured the imagination of a generation. People adored the movie so much that the Jurassic Park theme song is still played at weddings.

Because of our fondness for the original, we tolerated the mediocre 1997 sequel, The Lost World: Jurassic Park, even though it had mostly a different cast. But when Jurassic Park III was announced, there were high hopes because of the return of Neill and Dern. No one expected it to be as good as the original, but certainly it would be a vast improvement over the second, right?

How wrong we were.

Few movie experiences have been more bitterly disappointing than Jurassic Park III. It’s not only the worst film in the franchise. It’s one of the worst threequels of all time. Universal Pictures, Neill, and Dern were simply back for more cash, and it showed. The only semi-positive observation? Jurassic Park III is short, clocking in at 92 minutes. But it’s even shorter than that because the credits start rolling at one hour, 24 minutes. The ending is so abrupt that you’re left wondering what happened to the rest of the movie.

So much about Jurassic Park III felt half-baked—astounding for a movie with a $93 million budget, the highest in the franchise at the time. The lazy script had no clearly defined antagonist—nobody worth rooting for, or against. Parts of the plot were preposterous (Alan, desperate for money to finance his latest dig, doesn’t wait for the check to clear before agreeing to go on the island? Nor does he do any sort of background investigation on fake rich guy Paul Kirby, played by William H. Macy).

Not surprisingly, there are plenty of stories out there about the problems making Jurassic Park III. Screen Rant has a good breakdown on several of the issues, including Michael Crichton bowing out of writing the script.

Still, Jurassic Park III might have overcome all this if it made better use of the franchise’s favorite characters. Neill portrayed Grant as tired, bitter, and bored. He showed no enthusiasm for a subject (dinosaurs) that he’s supposed to be passionate about. If Grant doesn’t care, why should the audience?

Dern’s the best actor in this movie. But she was essentially wasted with very little screen time. Dern literally phoned in her performance as a satellite phone call helped save the day.

Fans hate Jurassic Park III. It’s the lowest-rated film in the franchise on Rotten Tomatoes. It made money ($368 million worldwide), but that was considerably less than The Lost World: Jurassic Park ($618 million). Universal Pictures decided that was enough and put the franchise in cold storage.

In 2021, Neill defended Jurassic Park III. He told Collider, “I really like Jurassic Park III and it gets an unfair [treatment]… I agree that the last 10 minutes are way too easy and way too hurried, but I think up to that point, it’s pretty damn good.”

Neill and Dern get a shot at redemption with Jurassic World: Dominion. Hopefully, they won’t let us down again.

Jurassic Park III is now available for streaming on HBOMax.