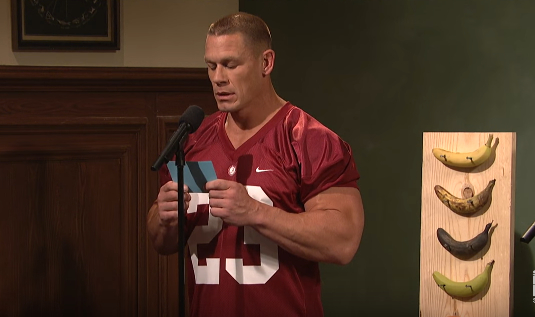 Alabama fans won’t be pleased with a certain skit from this week’s Saturday Night Live as John Cena helped roast the school’s academics.

The skit features Cena as a star Alabama football player who strongly believes in the academic side of his college experience. Cena says he will only play in an upcoming bowl game if he receives A+ grades in his classes. That tall order is one the school’s administrators are more than willing to accommodate.

Get ready to learn a lot of useful and very factual information about bananas.

The skit may not be breaking any new ground in its topic of athletes receiving preferential treatment, but the premise of a science project with bananas and Cena’s delivery turn this into a pretty funny and memorable bit.

Cena earns some big laughs with his round banana and his explanation of why he used to not like bananas (they look like boys’ wieners). He and Bobby Moynihan (the head coach) are all too believable which is both hilarious and unsettling.

This is one of many SNL skits where the humor derives from a place of truth. They took a fact that many universities don’t want to address and cranked it up to an 11. Add in a charismatic host and you have the formula for a winning skit which just so happens to come at the expense of Alabama.