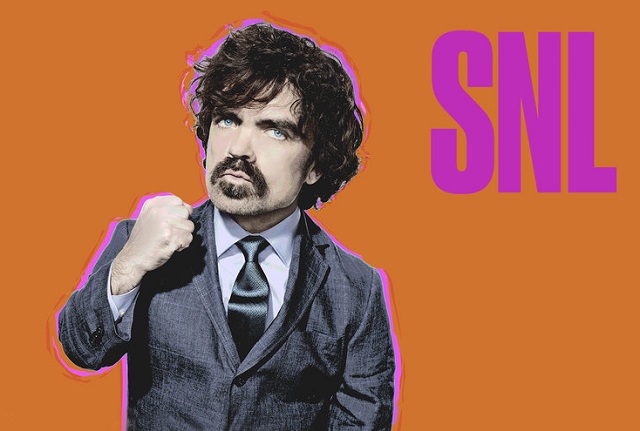 Saturday Night Live returned from another break with a rocky episode that started out rough and struggled to recover throughout the rest of the show. Most of the night was spent on sketches that seemed to have a good idea in the middle, but not a fully realized concept by airtime on Saturday.

While this episode may have been a bit of a mess, first time host Peter Dinklage (Game of Thrones) was great, and saved more than one sketch from utter disaster. Working with shaky material must be tough, but Dinklage is a seasoned actor who definitely seemed game for whatever the writers threw at him. SNL has done a pretty good job with first-time hosts this season, which has helped the show to one of its better seasons in recent memory.

Cold Open: CNN’s At This Hour
For the third episode in a row, SNL used CNN for its cold open, only changing the host from Jake Tapper (Beck Bennett) to Kate Bolduan (Kate McKinnon). Bolduan’s conversation with Donald Trump supporter/crazy person Scottie Nell Hughes (Cecily Strong) would have been one of the better cold opens of the season without the constant cut-aways to a Trump rally.

Best Sketch: Mafia Meeting
It shows what kind of evening SNL was having when a sketch with two miscues is the best sketch of the night. In the performance of the night, Dinklage’s Jonathan Cummings interrupts a meeting between mobsters to sing about his “space pants,” and gets some help from Gwen Stefani along the way.

This sketch had a very awkward start when Jon Rudnitsky apparently missed his cue, and entered about a half-minute late. While cast members have flubbed lines and missed their marks, walking on late is something that rarely, if ever, occurs.

Second-Best Sketch: Undersea Hotel
In the second-best performance of the night, Taran Killam portrays a dead Caribbean resort employee who floats up to the window of a couple’s underwater honeymoon suite. The skill with which Killam drags himself along the glass to terrify the couple (Strong and Bennett) is top-notch, and very Jim Carrey-esque.

Weekend Update Moment: Pete Davidson on Hulk Hogan
The night before Wrestlemania 32, Pete Davidson stopped by the Update desk to discuss the Hulkster’s $140 million court case win over Gawker. Stand-ups on SNL have always used the Update desk to discuss their personal take on current events, and this season, Davidson — along with Leslie Jones — have given this tradition some of its best segments since Chris Rock was in the cast.

Worst Restaurant Idea: Trendy Restaurant
Dinklage and Aidy Bryant take some friends (Bennett and Vanessa Bayer) from Columbus, Ohio to the trendiest new restaurant in New York City where everything is served through a glory hole. Maybe not the highest concept for a sketch, but Bryant and Dinklage really sell their excitement as bread, corn, and eventually a very long corn dog are passed through the hole.

Other Notes:
Sasheer Zamata didn’t appear in a sketch this episode, and surely has the most shutouts this season.

If you liked the bad Danish accents in the “Vacation Nightmares” sketch, watch “I Did It in My Style, the Story of Frank Sinatra” where Fred Armisen leads the Danish Repertory Theatre in a re-telling of the life of Sinatra.

Who wouldn’t watch Dinklage and Jones on Naked and Afraid: Celebrity Edition?