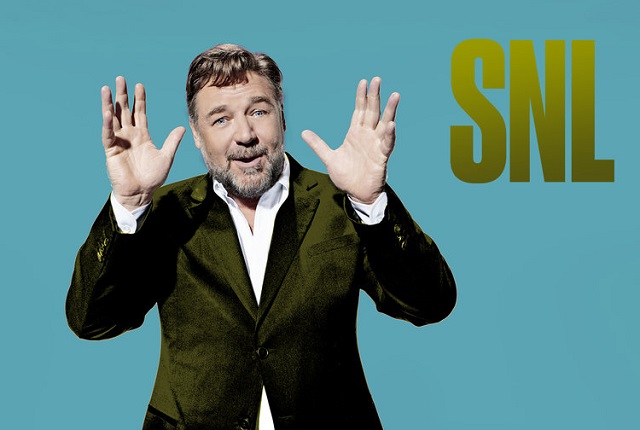 For the second week in a row, Saturday Night Live selected a host more widely known for his dramatic work with Russell Crowe getting the gig this time around. Crowe was good in the four sketches he appeared in, out of nine total, but the lack of Crowe throughout the episode brings up questions about what he was willing to do, and the odd good-byes at the end of the show (he saluted John Belushi?) with the cast standing well behind him on stage add to that mystery.

After a promising string of episodes over the past three months, the last two weeks of SNL have been a major letdown. While the Peter Dinklage episode appeared to be a series of funny, but unfinished concepts thrown together after a two-week break, Crowe was the victim of lazy writing which was oddly full of historical and medical inaccuracies, and very few laughs. With one month left before the season finale, SNL appears to be heading down the same path it has the past two seasons with writers and cast members seemingly looking ahead to the summer hiatus.

After a few episodes with CNN as the backdrop for the cold open, SNL switched gears with the New York primary coming up on Tuesday and let Hillary Clinton (Kate McKinnon) tell us all about how much she loves her “home state” of New York complete with hot dogs, nuts, a Yankees/Mets hat, and a subway ride. SNL hasn’t really hit many home runs with its political sketches this season, but this was one of the better ones largely due to McKinnon’s performance, and her hilarious reenactment of Clinton’s attempt to ride the subway.

There really wasn’t a lot to get excited about with this episode, but this sketch is a nice throwback to the recurring characters sketches from 10-15 years ago. It’s absurd and doesn’t make any sense, but so was “Astronaut Jones.” Also, Leslie Jones is amazing in this sketch and showing that she can get laughs with characters that aren’t just a “angry woman.”

Another sketch from the last 15 minutes of the episode was the latest pre-taped sketch featuring Beck Bennett and Kyle Mooney. Here, they are weirdly spot-on two excited new employees of a local arcade/pizza place, ala Chuck E. Cheese’s, that they frequented as kids.

McKinnon’s Deenie appeared for the second time to discuss the recent finale of The People vs. OJ Simpson, but she hadn’t finished it yet, so she caught everyone up on the soap opera she watches. Deenie is actually based on longtime SNL writer Paula Pell’s mother.

Here is Paula with the real-life Deenie on the set of The Young and the Restless:

Great time meeting the talented and delightful cast of @YRInsider. My mom and I toured the set and we can die now! pic.twitter.com/BRIxP0t4ee

As I mentioned in the introduction this episode had a few factual inaccuracies. The “Match Finders” sketch had Crowe’s professor mixing up female anatomy, and Mike O’Brien’s timeline in his “Oprah Winfrey: A Life of Love” was off, but the biggest and most glaring mistake was in the sketch featuring Crowe as a holographic Henry VIII.

The sketch isn’t very good, but the basic premise is that a museum exhibit features a hologram of Henry VIII that will answer your questions. The tour guide (Jon Rudnitsky) mentions that Henry VIII had no male heir, and the hologram proceeds to ask all the women who walk by to “bear a son.” The only problem with this is that Henry VIII did have a male heir, Edward VI, with Jane Seymour who became the King of England upon Henry’s death in 1547 at the age of nine. So not only was this sketch bad, it’s one joke was wildly inaccurate. Didn’t anyone at SNL watch The Tudors?

Jay Pharoah was apparently the odd man out this week, and didn’t appear in a single sketch.

A bumper honoring Merle Haggard was shown after Margo Price’s performance of “Hurtin’ (On the Bottle)“. The country music legend died on April 6 at the age of 79, but he never actually appeared on SNL.

Al Sharpton appeared as Charles Richards, a statistical analyst, in the PoliticsNation sketch opposite Kenan Thompson’s impression of him.

Mike O’Brien returned with another short film, “Oprah Winfrey: A Life of Love,” that was far too similar to his funnier “The Jay-Z Story” from last season.

** You can read all of our SNL recaps here.