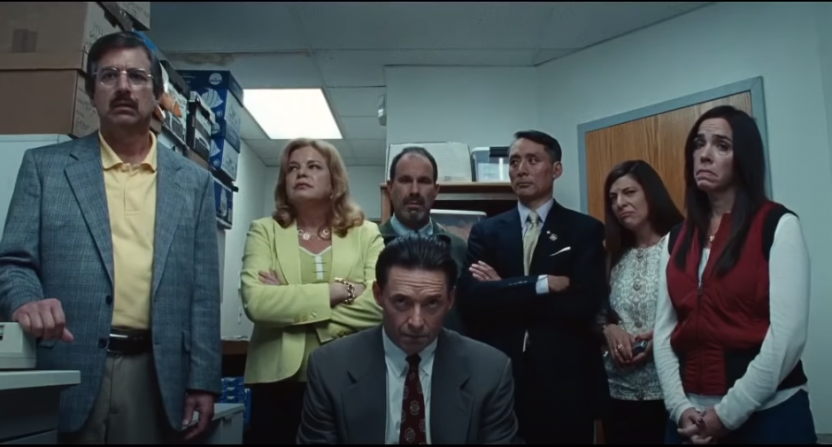 Despite COVID-19 shutting down theaters, there are plenty of movies available through streaming. We’re just over halfway through the year, and I’ve seen 103. Here are the best films of 2020 so far:

Quote: “There’s nothing left for you to take. You’ve already taken it all.”

Leigh Whannell is best-known co-creating the Saw franchise. In recent years, he’s branched out as a director and done some very creative work (Upgrade was one of more underrated movies of 2018). Now, Whannell puts a fresh spin on a classic. Instead of simply regurgitating the H.G. Wells story, this is completely different.

The movie opens with Cecilia (Elisabeth Moss) making a desperate late-night escape from her abusive ex who soon after commits suicide. Just when Cecilia thinks she is finally free, strange things start to happen. This is a film for the #MeToo era. You could look at it as a commentary of how abusers continue to terrorize their victims long after the wounds have healed. Made with a shoestring budget of $7 million, The Invisible Man has been the surprise hit of 2020. Thanks to good word-of-mouth, it is the fifth-highest grossing film of the year, taking in $124 million worldwide.

Quote: “You know what I wish? I wish we could do that all over again.”

Are you sad and stressed out? Driveways will make you feel better. Single mother Kathy (Hong Chau) and her young son Cody (Lucas Jaye) have temporarily moved into the house of her late sister as they’re trying to get it ready to be sold. Right next-door is neighbor Del (Brian Dennehy), a Korean War veteran and a widower.

When a friend forgets to pick up Del, Kathy gives him a ride to the VFW. She tells him there’s no electricity at her sister’s house because of overdue bills. The next day she returns to find out that Del has run an extension cord from his house so that she can have power. It’s little acts of kindness that make this movie special. Soon Del and Cody form a friendship that includes a sweet moment when Del shows up for Cody’s birthday party. This is Dennehy final film before he died in April.

This is difficult to watch. Never Rarely Sometimes Always seems so realistic that it looks like a documentary. In rural Pennsylvania, teenage Autumn (Sidney Flanigan) is pregnant. Autumn reveals her secret only to her cousin Skylar (Talia Ryder), and tells her that she wants to have an abortion. Due to state laws regarding parental consent, they go to New York City to have the procedure done.

Two young girls in the big city with very little money spend a lot of time waiting and hanging around the Port Authority Bus Terminal, because they can’t afford lodging. When Autumn is finally able to seek medical attention, it’s difficult and emotional. It all builds to a question-and-answer session that is heartbreaking. The movie will make you think long and hard about how our society treats women, especially since almost every man in this film is a horrible human being.

Quote: “Are you happy? Or are you pretending to be happy?”

Prisons can look lovely. You can live in a beautiful home with a beautiful spouse and still feel like a captive. Hunter (Haley Bennett) appears to have it made. She resides in a mansion with her hunky, rich husband. Everything and everyone looks fabulous. Quiet and pregnant Hunter spends her days at home while hubby works for the family business.

One day Hunter decides to swallow a marble. This is excitement for her. The thrill of doing something dangerous seems liberating. Hunter doesn’t stop there. She keeps upping the ante by finding more and more dangerous things to ingest. She’s suffering from pica, an eating disorder that involves eating items that are not typically thought of as food. Hunter isn’t just rebelling. There’s something seriously wrong here. When her husband finds out, the details come into focus. This film is about a woman’s fight to control her life, and Bennett deserves an Oscar nomination.

Quote: “There are many things I never told you.”

How much do we know about our parents? Their hopes and dreams. Their struggles and failures. That can be complicated when you’re talking about immigrants and the children they raise in America. These parents sacrifice so much.

Tigertail is about one Taiwanese man’s sacrifice. The story is told in two timelines: Pin-Jui as young man (Hong-Chi Lee) before he came to the USA and Pin-Jui as an older man (Tzi Ma) with grown children in New York City. As a youngster, he loves American music and dreams of escaping poverty to live in the states. When he gets the chance to pursue that dream, he jumps at it, but it comes at a great personal cost. Over time, he becomes a divorced, regretful old man who has an estranged relationship with his daughter.

Tigertail was written and directed by Alan Yang, who along with Aziz Ansari, co-created the Netflix series Master of None.

Quote: “My guitar class is a patriarchy.”

Bridget (Kelly O’Sullivan) is a 34-year-old Northwestern University dropout whose life is stuck in neutral. She feels constantly annoyed when people judge her for what they perceive as a lack of ambition. To make ends meet, she quits her job as a waitress to become a summertime nanny for an upper-class lesbian couple with a precocious 6-year-old daughter Frances (Ramona Edith Williams). This is strictly a business decision because Bridget doesn’t even like children.

There’s not an instant bond between the child and the babysitter. It takes a while for Bridget and Frances to warm up to each other. Through Bridget’s interaction with the family, she learns a lot about them and herself. This film has a strong feminist tone with difficult conversations about postpartum depression and how one defines success in adulthood. O’Sullivan wrote the screenplay, which tackles tough issues with a warm touch.

Javier (Javier Gutierrez) used to be somebody. A once successful businessman is now unemployed, with a wife he no longer loves and a son he barely tolerates. Worst of all, in his mind, he’s forced to give up his luxury apartment. This wasn’t supposed to happen. Not to the man who created the advertising tagline: “The life you deserve.” Javier is going to get what he deserves by any means necessary. So, he stalks the new tenants of his former home.

The Occupant is a slow-boil thriller about a desperate psychopath willing to do anything to get what he wants. It’s riveting and terrifying to watch Javier’s evil plan unfold. If he put as much dedication to finding a job, he’d be employed within a week. But that wouldn’t make for an interesting movie. When it all comes together, you realize what a truly terrible person Javier is.

Quote: “We fought in an immoral war that wasn’t ours for rights we didn’t have.”

We’ve seen movies about the Vietnam War before. But Spike Lee’s interpretation is a little different. According to Lee, “At the height of the Vietnam War, almost a third of the fighting force in Vietnam were African Americans. Yet, we were only 11, 12% of the American population.” And yet, most people don’t know that.

Da 5 Bloods is the story of four black veterans returning to Vietnam in search of millions of dollars’ worth of gold they had hidden during the war, as well as the body of a lost comrade who died in battle. The gold is mostly a MacGuffin (a plot device used to motivate the characters). But it also represents reparations for the broken promises of America. This is not a preachy movie though. It’s entertaining, highlighted by a powerhouse performance by Delroy Lindo, who’s getting Oscar buzz. Lindo plays Paul, a Make America Great Again hat-wearing vet suffering from PTSD.

2. All the Bright Places

Mental illness is often hard to understand in real life, so it’s difficult to reflect in art. Movies have tried, and usually failed, to portray the nuances. All the Bright Places may not be perfect, but the characters come across as authentic. That’s the gift of director Brett Haley (The Hero (2017) and Hearts Beat Loud (2018)). Few in Hollywood do a better job of presenting characters in way that audiences can connect with.

Haley does it again with Elle Fanning and Justice Smith. Fanning plays Violet, who’s grieving the death of her sister. Smith plays Finch, who’s battling bipolar disorder. These high school classmates form a bond that makes both feel a little less lonely. All the Bright Places, based on a young adult novel, is more of a drama than a teen romance. Forget the myth of “everything happens for a reason.” Sometimes you must learn to live with heartbreak.

Quote: “My problem? My problem is you. It’s the people who trot their poor children out like racehorses at Belmont, who derive some perverse joy out of treating us like low-level service reps.”

What do you do when you’re good at your job and feel unappreciated? You could ask for a raise. You could seek employment elsewhere. Superintendent Frank Tassone (Hugh Jackman) and his assistant Pam Gluckin (Allison Janney) have a different idea: embezzle millions of dollars from taxpayers to bankroll their lavish lifestyles. This audacious scandal is a true story that happened in 2004 in Long Island, NY.

At the heart of this scheme is Tassone. He’s not some cartoonish villain. Jackman’s Tassone is well-meaning, earnest, and so darned likable. He wants the best for his school district, and he delivers. But he feels undervalued by his bosses and the public. Tassone doesn’t see himself as a wrongdoer, even though he fully realizes that he’s doing wrong. As the fraud is slowly revealed, Tassone remarkably still believes he can talk his way out of this one. Enjoy this career-best performance by Jackman.