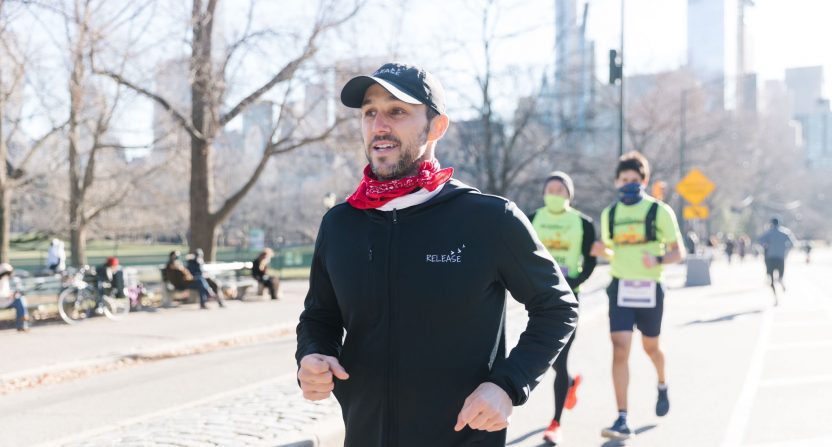 Last December, millions of people watched Tayshia Adams and Zac Clark get engaged on Season 16 of The Bachelorette. This weekend, Zac will take part in a race that will test himself like nothing else. Zac and 10 other people will take part in the Goggins Challenge, which consists of four-mile runs done every four hours over a 48 hour period.

A participant of six New York City Marathon’s, Zac knows he’s in for an even tougher test with the Goggins Challenge, but it’s one that he looks forward to.

“A lack of sleep is really one of the key factors working against you,” Zac explained to The Comeback. “In my experience, running marathons, you kind of go out, you let it rip, you finish, and you wind down or eat a slice of pizza and call it a day. With this, it’s going to be a real test of the mental, the physical, and the spiritual. There’s going to be moments where I want to give up, and that’s why it’s important to run with a team and there’s definitely going to be that team and community element to it.”

Zac has a 10-minute mile pace in mind, but he’s running for a more meaningful purpose than setting a time. He’s raising money for the Release Recovery Foundation, a charity that Zac co-founded. The Release Recovery Foundation is a non-profit charity that provides scholarships to people who may not have the financial means to go and receive treatment. Separate from the charity is Release Recovery, a group of three centers run by Zac and co-founder Justin Gurland for those with mental illness and substance abuse addiction.

Zac is passionate about helping those with substance abuse addiction because he has gone through it himself. Diagnosed with a brain tumor at 23, Zac became addicted to prescription drugs after undergoing surgery, and that led down a road of addiction that included alcohol. To his credit, Zac is open about his past and is proud to say he’s almost a decade sober. He talked about what made him take the first step to recovery.

“I loved to party. I loved to drink. I loved to do drugs. I was blind to the effect that it was having on the people around me in my life,” Zac said. “And so, I really needed an intervention of sorts that you can’t really make up. So for me, those final moments when I was still out there drinking and drugging… I was running around Camden, New Jersey doing things I shouldn’t have been doing.”

“It was late August, I was trying to cash one of my old man’s checks that I had stolen from one of his desk drawers and it was a Saturday morning. And what happened was the bank teller kind of took one look at me when I was trying to cash this check and she knew something was going on. So she ended up actually calling my dad, who, if you question coincidence or that things happen for a reason, my dad happened to be in his office, he happened to pick up the phone from an unknown number. All these crazy things took place, and he picked up the phone and rushed down to the bank. And he found me after I had been missing for several days, and he kind of put his arm on my arm and said, ‘Son, we’re going home.’ And the next day, I was in rehab.”

“You ask, ‘What did it take to get you to finally get some help?’ And for me, it was that undying love from my family. Had my dad or my mom or my family given up on me, I don’t know if I would’ve been in a situation to have the open mind to accept that help.”

Realizing that he was in a fortunate situation to get help and that his center was mainly serving a sector of people who can afford treatment, Zac wanted to do something to help those without the financial means to get treatment. For the Release Recovery Foundation, it’s a potential lifeline for underserved people and groups, because mental illness and substance abuse addiction doesn’t discriminate and everyone should have the chance to get top notch treatment. That’s why Zac is running and has set a goal to raise $100,000 this weekend.

“It’s not lost on me that my family was able to afford for me to go away and get really really good treatment,” Zac said. “And that’s really at the crux of this entire weekend. We’re trying to raise money for mental health and substance abuse treatment, because there are tons and tons and tons of people out there that just cannot afford it. That’s the goal here, to help. If we can help one more person as a result of our efforts this weekend, then we’re going to be making the world a better place.”

In a lot of ways, it’s thanks to being on The Bachelorette that Zac has the platform to raise awareness on mental health and substance abuse treatment, and to raise money for those endeavors. Zac is a very positive guy, and that’s how he approached the show, as well as the idea that what’s said and done is made public to millions of people.

“The Bachelorette experience was a really positive one for me,” Zac said. “Like many things in life, I went into it with an open mind and didn’t really know what to expect, but kind of stayed out of [making] expectations. I couldn’t have been more excited about just the overall experience and getting to meet a bunch of cool people, most notably my beautiful fiancée Tayshia. It just reinforced the notion for me that life is short and you’re presented with opportunities to go left or go right, and it’s good to just challenge yourself and take the risk.”

“[In terms of the public nature of reality TV] I think the public piece of it was after the fact. I approached it as if I was… people kind of ask me a lot of the time, ‘What’s it like to be back in real life?’ And to me, [The Bachelorette] was real life, that was my life at the time. In that moment as I was dating Tayshia on the quote, unquote ‘show’ and going through that process, I approached it as if there were no cameras and as if there were no other people around.”

“And I think that really helped me. Because I didn’t get caught up in the, ‘Oh my God, what did I just say?’ ‘Are they going to air that?’ That does happen for a lot of people who go on it. And after the fact, kind of once we were announced and the final episode aired, that’s why you do it [getting engaged]. It’s been a great ride since then, and we’ve been able to get to know each other on a deeper level and so it’s all good from my end.”

Now that the COVID-19 pandemic has seen an uptick in people having mental illness or substance abuse addiction, Zac gave some advice to those who may have a loved one who needs help and for those who might need to take that first step to get help.

“One, always engage professionals if you can,” Zac said. “That’s huge. Too many times, you see families trying to steer the ship and it’s too emotional. It’s just too emotional for families or loved ones to be the ones spearheading the care. And then two, just love the hell out of them. Even if you don’t think they hear it, they do. Let them know that you love them, let them know that you understand their struggling. Use words of affirmation, and hopefully they get to a place where they’re willing to accept the help that’s being offered to them.”

“Typically, [those who need help] don’t come to me on a winning streak. When I get that call, or when I start to engage someone who’s struggling, I kind of just ask some questions like you’re asking me, ‘What’s going on?’ ‘Let me hear you, what do we need to change here?’ And then I just challenge them to keep an open mind and take a leap of faith, and believe that things can change and things can get better.”

You can follow along with Zac’s journey in the Goggins Challenge on Instagram (@zwclark) and Twitter (@zacwclark). The Goggins Challenge will begin on Friday, April 9 at 3 p.m. ET from the Equinox Hotel in Hudson Yards, Manhattan. For more information or to donate, visit releaserecoveryfoundation.org/goggins-challenge

UPDATE: Zac and crew successfully completed the Goggins Challenge over the weekend and raised over $50,000 for the Release Recovery Foundation and donations are still being accepted.