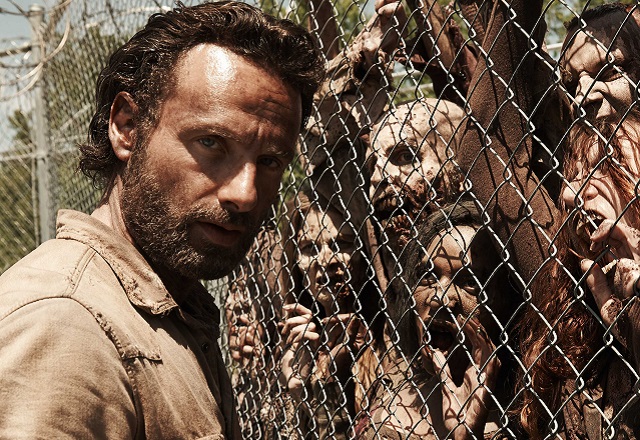 Warning: There will be spoiler discussion of The Walking Dead TV show as well as the comic book series. This is your last chance. OK, continue…

I don’t even need to say anything else, do I? Those two words have become short-hand for fans of The Walking Dead, like an emoji or a Crying Michael Jordan meme. Just mention it and they know exactly what you mean.

The most boring plot line in the show’s run to date and it was also, pound-for-pound, one of the worst seasons of any major television show in recent history. It’s a testament to the fan fervor and huge ratings surrounding the program that it survived relatively-unscathed. (Unlike poor Sophia…)

All of that fan support and ratings success has been a crutch creatively for the show because it’s given The Walking Dead something very few TV series ever get: A sense of overwhelming security. The thought of cancellation has been unthinkable since the ratings for the pilot came in and, if anything, the prolonged financial success of the show has often given the writers and producers very little incentive to take creative risks and/or maximize a particular plot’s potency.

All of the show’s worst tendencies came out at Hershel’s Farm. The plot slowed down to a crawl as characters remained stagnant in one place, spending most episodes having circular conversations and reducing themselves to “ideas” rather than flesh-and-blood people. Episodes often included one nasty zombie effect or a jarring moment right before the credits to justify its existence, but more often than not, they left viewers wondering when we were going to get off this godforsaken farm.

Eventually we moved on to the prison and Woodbury and, for a time, the show improved. A strange decision to linger on the backstory of The Governor ground things to a halt once again, but by the time the show moved on from the prison, The Walking Dead entered its golden period. 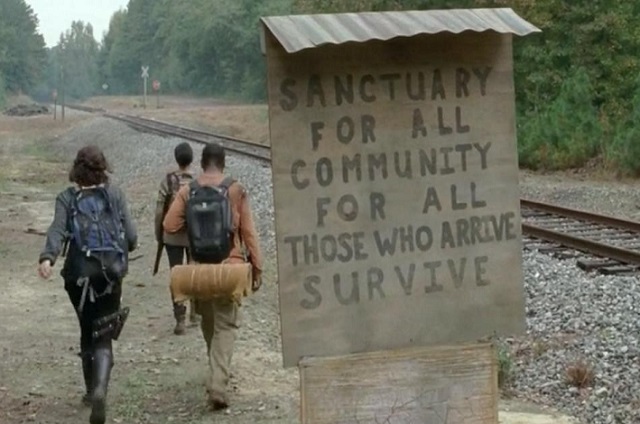 With the cast split up on the road to Terminus, it forced the writers to delve deeper into each of the characters and their relationships with one another. Episodes like “Still” and “The Grove” in season four stand out as inclusive stories that helped us understand characters like Daryl and Carol in refreshing ways, while also driving home the dire state of the world without the need for spectacle.

It was enough to make you think the show had finally figured out its formula.

That brings us to the season six mid-season finale (which I can’t believe is a thing we all say with a straight face). As the screen went to the black and the credits rolled, I couldn’t help but feel that old familiar feeling creep back in.

Oh no. This show is terrible again.

All of the same problems from Hershel’s Farm are back. The idea to base the entire first half of the season around the events of a couple days is intriguing and certainly provided ample opportunity to mine drama. Instead, the show has indulged in its worst tendencies all over again.

The producers took all of the wrong lessons from season four, pairing off two or three characters for episodes at a time but forgetting to give them honest, real emotions to work with. In “Always Accountable,” it was as if the show suddenly remembered Abraham existed and realized it needed to wedge three episodes’ worth of character development into three scenes. (If you’ve read the comics, you probably know why…) The secret to fan-favorite character Daryl is that he always works best as the sounding board for another character. That’s why his best scenes are always opposite Carol or Beth or Rick. Making him the star of an episode is a misuse of his value.

Characters have also stopped being people and started being “ideas” again as well. The people of Alexandria might as well be named for the emotion or character change they’re supposed to elicit in others. Deanna ceased to be a person and simply became Rick’s Remembered Humanity. She checked off the thing she was supposed to do, Rick checked off the appropriate reaction, then she was no longer needed so she died and now we move on.

How heavy-handed have things become? Here’s a discussion two characters had at one point during the “Start to Finish” episode that ended the mid-season.

“No. I think we gotta earn it. All of us. Whether it’s waiting, knowing if everyone’s safe, dealing with that, or fighting them. A place like this has gotta have a price, right?”

“We haven’t paid it already?”

“Cause I didn’t see it. Doesn’t matter what it feels like, he’s not dead. And this place isn’t over.”

It’s not the worst dialogue ever, but it’s also not a conversation that actual human beings would have. It’s the kind of stilted dialogue two characters on opposite sides of an issue have because the plot demands it. I could tell you which characters said this to one another, but does it matter? They might as well have written the conversation first and then plugged in who says what afterward. And that’s what the entire episode sounded like. Not humans talking to one another but characters talking at each other. 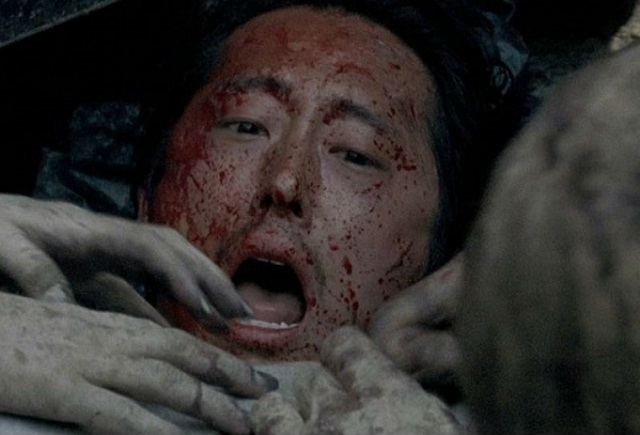 And then there’s The Glenn Problem.

Much e-ink has been spilled over the misplayed Glenn death fake-out and how it ruined the implied contract viewers have with the series. It also revealed just how much people behind the scenes are overthinking when it comes to appeasing hardcore fans. We know that Negan is coming and if you’ve read the books then you also know something else that’s probably coming. In the comic, Negan introduces himself to everyone by beating Glenn to death with a barbed-wired baseball bat named Lucille. It’s one of the most shocking moments in a story filled with shocking moments.

You can see how desperately the show is trying to dance around it. They teased an image of Glenn with a baseball bat early on in the season and even almost jumped the gun in Terminus. Then the writers tried to swerve everyone with the latest fake-out, only to reveal he is alive and might still meet his presumed fate. Or maybe not. Showrunner Scott Gimple recently told EW that the upcoming storyline will make some “hard left turns” from what happened in the comic, which many have taken to mean this particular storyline won’t play out as expected.

If so, that’s fine. The show is not required to follow the source material and has found some success in the past diverging from it. But you also play a dangerous game of chicken when you decide to focus your efforts on shocking the smaller group of hardcore fans, rather than telling the best story possible for the overall audience. By worrying too much about whether or not the audience know what’s coming, the show loses sight of the real objective here (i.e., J.J. Abrams pretending that Benedict Cumberbatch wasn’t Khan in Star Trek Into Darkness), which is to tell a great story.

(Quick aside, if writers are going to swerve on Negan killing Glenn, then they better make sure it’s done right and the only way to do that is to keep the stakes equally as high. Glenn has become a fixture on the show and his death would/will affect the makeup of the entire story. If it’s not Glenn, then someone of the same level has to take his place beneath Lucille. Assuming Rick and Carl are un-killable at this point, the only characters that would qualify are Daryl, Michonne and Carol. Maggie could work as well, considering the emotional effect on Glenn and because she becomes such a pivotal character later on in the comics. But if you swap in, say, Abraham or Sasha, you’ve ruined the entire point and copped out.) 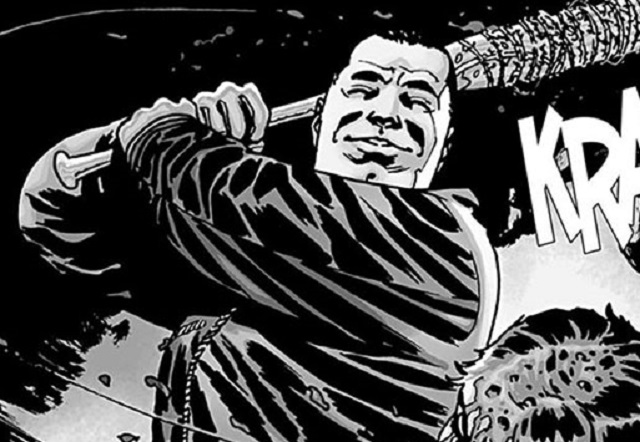 So what can The Walking Dead do to get back on track? Aside from getting back to basics and writing real dialogue for real characters with real emotions, there are two quick fixes:

1. Shorten the season so you don’t spend half of it twiddling your thumbs, which will never happen so long as ratings are what they are.

2. Start treating each half-season like its own individual season with its own story arc. You trim away the fat from your storytelling and it forces you to get to the point ASAP so your characters can be the best they can be. It doesn’t mean you can’t slow the show down every once in a while to tell more personal stories, but it means you can’t waste time dedicating an entire episode to the 12th-most interesting character’s backstory.

Like most people, I watch the new episodes of Fargo the day after The Walking Dead and it’s become shocking the difference in quality between the two shows. On paper, Fargo should be a silly concept held together by nonsense. The Walking Dead should be way more grounded and authentic (inasmuch as a show about zombies can be authentic). And yet it’s the opposite. A part of that is the care taken to make every episode of Fargo feel like a mini-movie. Mostly, however, it’s the care taken to make every character in the show relatable and believable on some level. No matter who lives and dies on Fargo, you feel for them.

I can’t say the same about The Walking Dead right now. Hopefully the people behind it are watching Fargo as well. They could use the reminders.