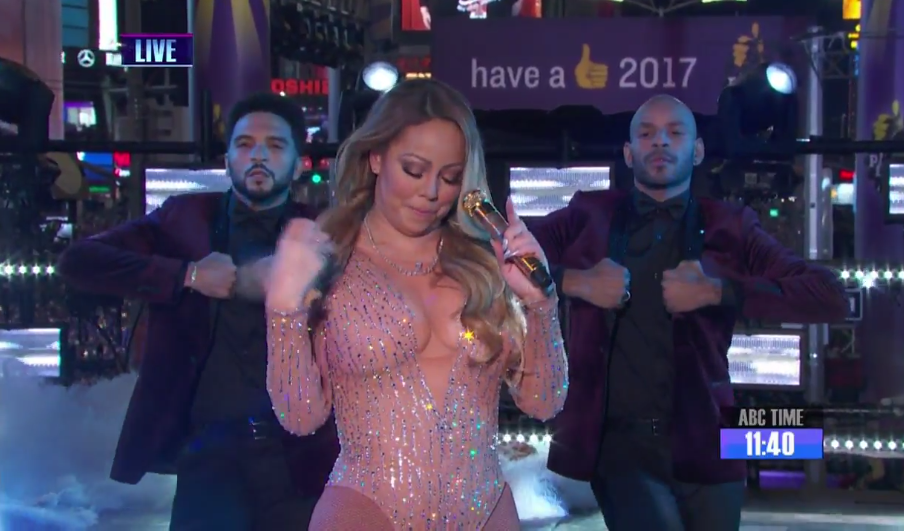 Mariah Carey’s performance on Dick Clark’s New Year’s Rockin’ Eve Saturday Night was nothing short of an absolute disaster, from bad teleprompter reading, to lip-syncing issues and then her walking off the stage after three songs.

Carey’s reps said she rehearsed plenty for the performance, including three hours the night before and a good soundcheck at three in the afternoon. But her reps are escalating the war of words, saying that DCP “set her up to fail.”

“She was not ‘winging’ this moment and took it very seriously,” BWR-PR’s Nicole Perna tells Billboard. “A shame that production set her up to fail.”

Because Mariah Carey is an honorable person, as well as knowing her performance is live, she went on anyway to perform, and everything went downhill fast. Perna says that Carey was “flying blind”, and as for singing to track, “it is not uncommon for artists to sing to track during certain live performances. Any allegations that she planned to lip sync are just adding insult to injury.”

However, Billboard tells a different story from some people who worked on the production, and it doesn’t shine a good light on Carey, which is to be expected.

But a production source paints a different picture, telling Billboard that Carey, “Had ample time to rehearse and chose not to.” The insider adds that Carey used a body double to rehearse in her place earlier on New Year’s Eve day and that, even though the singer did not do a vocal run-through, “all was working” on the technical side.

“The music was provided by her team, there were no fewer than eight audio monitor wedges in front of her and the dancers had no problem syncing up to the music.”

Audio producer Robert Goldstein, speaking to the New York Times, said, “Every monitor and in-ear device worked perfectly. I can’t comment beyond that and don’t know what her nontechnical issue may have been.”

If you somehow missed the performance, here it is in all of its cringe-worthy glory. We haven’t heard the last of this yet.