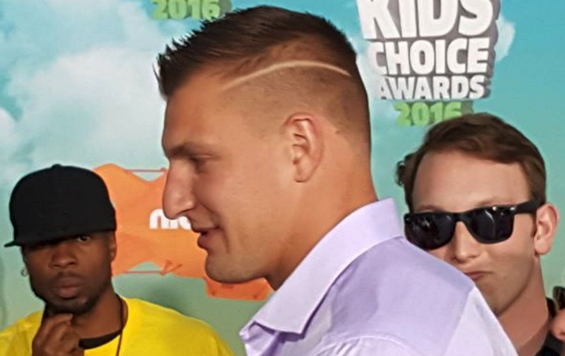 Sports and fashion are two explosive worlds that have increasingly embraced one another with each passing year. The blossoming romance is akin to the unbreakable bond between Jerry Seinfeld and the always feisty, Little Jerry Seinfeld. They go hand in hand. It works for the players, it works for the brands, and most of the time it even works for the fans.

What true naturals like Joe Namath sparked simply by going with their instincts has evolved into a giant publicity spectacle, which often leads to various endorsements from brands looking to move that all-important needle. And that’s when things inevitably snowball into an attention-forced abyss, like the time Shawn Bradley blew the lid off of fashionable biking attire, or when Eli Manning did this atop a Manhattan high-rise. Bold and fearless. Or, just incredibly awkward. 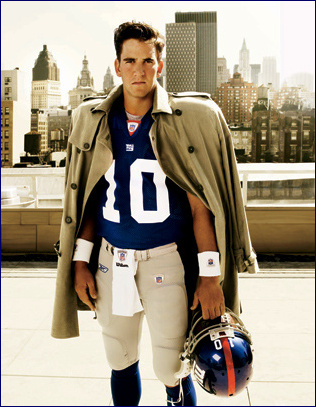 But then there’s all of those reliable fans, who — while frequently clamoring for the camera — never bow to the whims of snooty, highbrow fashionistas. What they do bring is a unique, expressive element of their own choosing, one that usually coincides with just how bad or good their team is performing.

This past week happened to be a pretty busy one when it came to NFL free agency, so football is baaaaaack … kinda.

It was thoughtful of Mark Sanchez to go with a tie that flashed some orange to pay homage to the Broncos, his latest and greatest pitstop. I’m just not entirely sure the world is ready for Sanchez to consistently go with an unsettling version of the “Pat Riley slicked” look.

Since Shane McMahon returned to the WWE after a prolonged absence, his affinity for Air Jordans has been apparent. His Twitter profile even says he’s a sneakerhead — and so am I — so I’ve been enjoying the varying looks each week. And man, those are absolute beauties. Well done, Shane’O Mac. #TeamJordan

I decided to go with Clyde Parts 1 and II back to back this week because these two obscenely bright suits paired together basically equate to something only the hosts of a formal Easter egg hunt would wear. Despite the inconsistent weather as of late, and temperatures expected to be in the 40s this weekend in Manhattan, Spring is clearly here to stay for Clyde Frazier. You can disagree with the jacket choice, but you cannot deny the spirit.

I’m actually proud of Clyde for going with a solid-colored jacket and a subdued button-down in the interest of allowing his tie to excel. And boy does it thrive. That’s a tie knot for the ages. While I kind of wish he completed the circle by having the pocket square match the tone-setting tie, I realize you can never truly have it all. Oh, and Happy Easter, buddy.

Sean Miller combined the sweat from all 1,183 NBA games ever played by Patrick Ewing into one abomination of a shirt. Is it risqué? Oh, quite. Is it inventive? Yes, to say the least. Was Al Golden watching this situation transpire with great envy? Absolutely.

It’s St. Patrick’s Day and Don Cherry obviously sensed he would be featured, so he did what he normally does and rose to the occasion in wonderful fashion yet again.

Sidenote: I would pay good money to rent that jacket from Mr. Cherry for a Notre Dame game this Fall. That’s an instant smash hit in South Bend. Just the jacket though. I’m not ready to go full Don Cherry. Then again, is anybody?

Steph Curry got a sneaker cake for his birthday https://t.co/fcyspmtzi9 pic.twitter.com/MAIt1qVWQG

Steph Curry celebrated his 28th birthday this week. I respect the casual approach in simply wearing a hoody, while at the same time promoting his brand. And that cake, well, that speaks for itself. I just hope it was an ice cream sneaker from Carvel.

"At this point in my career, the @HoustonTexans give me the best opportunity to be successful."

New Texans starting QB Brock Osweiler nearly branded himself into the backdrop. Listen, it’s a nice gesture, guys, but you don’t have to wear a suit that marries well with team colors. Nonetheless, looking the part, my man. Certainly looking the part.

At long last, I’ve figured out the special bond that keeps Kevin Durant and Russell Westbrook from ripping each other’s heads off over who gets to shoot more. And that bond is, quite clearly, skinny jeans. Also, those black and gray Jordan 1’s on the feet of Durant are sicker than Steph Curry’s handle.

We said this last week to @TNT_CraigSager, you earn your $$$ during a #Popovich interview: https://t.co/SwQzIG0pM6 pic.twitter.com/uxeXHlDktk

Craig Sager’s tie is worth at least a thousand words and so is this priceless photo. If someone were to tell me that Sager’s tie were actually a rare, living, breathing reptile, I would barely flinch. The man is a national treasure. And then there’s Pop, who’s a treasure in his own right and also happens to be wearing a pretty nice suit. Predictably safe, sure, but by no means boring.

If there’s one reason to watch No. 14 seed Stephen F. Austin — other than to see how legit West Virginia looks — it’s this lumberjack wielding a giant axe. I mean, their slogan is “Axe ‘Em, Jacks!” Now that’s amazing, as is that man’s entire getup; robust beard included.

Which team made the best moves in free agency?@RealMikeRob: "The @RAIDERS" pic.twitter.com/7N8SCtcJwU

Michael Robinson spends a lot of time on the set with fashion great, Nate Burleson and the effect is pretty evident: Greatness.

If there’s one guy in the NFL capable of brining back the 80s — and that appears to be the goal of this haircut — it’s GRONK. Three words: Ice, Ice, Baby.

What does @michaelirvin88 think about RGIII to LA?

"….a star that shines bright." pic.twitter.com/oDgHtbHUjC

The knee-jerk reaction here is to criticize anyone wearing sunglasses indoors. BUT, and this is a big but, Michael Irvin has three Super Bowl rings. He’s earned the right to do so. You know who hasn’t earned the right? Colin Kaepernick. The first time I saw Kaep wearing shades indoors I knew the Niners were doomed.

Mike and I are back at it…let the debate begin! Remember everybody loves a little #RandB pic.twitter.com/Modwt8qQP2

Nate Burleson (at right) is wearing an outfit that serves as a great example of taking a chance, but basically knowing you can pull it off. Because honestly, this works. On Warren Sapp or Bob Costas? Probably not. But Burleson is one of the most stylish dudes in sports media and his mere presence at the NFL Network has forced everyone else to lift their game up. He’s their bold and fearless fashion-forward leader.

The one remaining thing Steph Curry still needs to fix: Whoever designs his sneakers. These things look like they should come with a bag of Sour Patch Kids and a hand-written apology from Under Armour.

"The #Patriots want to

Nice to see Ian Rapoport following the unwritten rules of suit wearing. Which basically means, he’s not wearing a Peyton Manning-like ensemble that has at least four dueling patterns.

C.J. Anderson signed a new deal, so he was in demand and made the media rounds. Love the spiffy jacket (better shot below) and also appreciate he put in the full effort even though he knew he’d only be shown from the waist above. It speaks to his work ethic.

Yup, that’s definitely a “new contract” kind of look. I would absolutely do the same.

Admittedly, this is a dated photo. Exactly one month old to be precise. But this honestly wouldn’t feel complete without casual Chris Berman — hey, I love the casual jacket/no tie look — complete with chest hair exposed and sweat for days. You’re welcome!