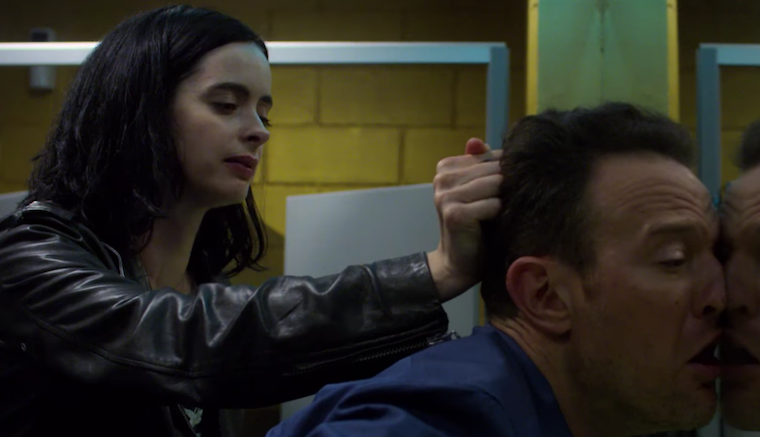 Trailers are a big favorite of ours at The Comeback. Sometimes, they’re better than the movies or TV shows they’re intended to promote. But they’re also a form of entertainment all by themselves.

This was a big week for Netflix trailers (nearly every week is now), with a new trailer for Jessica Jones, Season 2, debuting, along with a first look at the streaming network’s Lost in Space remake. Another notable trailer release was for HBO’s Paterno, starring Al Pacino as the renowned Penn State football coach. We covered that in a separate post.

While it wasn’t the best week for big trailers, especially in terms of blockbuster releases, there are a handful of films here that look intriguing. Here are the best movie and TV trailers from the past seven days:

Many fans think Jessica Jones was the best of the four Marvel Netflix shows. Unfortunately, the character was overlooked in The Defenders, with Krysten Ritter basically being used for comic relief and making fun of Daredevil, Luke Cage and Iron Fist.

Though Jessica Jones fits with the other “street-level” Marvel heroes, she’s far more real-world than a blind man with enhanced senses, someone who can channel his chi to make his fist a living weapon, and a guy with bulletproof skin and superhuman strength. Jones has super-powered strength too and it helps her out of some threatening situations, but mostly she’s a mess haunted by her past and trying to clean her life up.

That’s what makes her compelling and based on this trailer (which includes too much footage from previous shows), it looks like Season 2 of Jessica Jones will focus on that while also trying to uncover more of her origins and the events that gave her superpowers. And this time, maybe she’ll get some more help from friend Trish Walker (Rachael Taylor) along the way.

The renewed cult success of The Room and critical acclaim for The Disaster Artist have made Tommy Wiseau and Greg Sestero as popular as ever, despite being associated with what many view as one of the worst movies ever made. With that popularity, it was probably inevitable for one or both to collaborate again on some project. But could they ever get a movie made again?

Best F(r)iends shows the answer is yes. Wiseau isn’t directing this movie, but has a role as a creepy mortician along Sestero’s portrayal of a drifter dealing with personal tragedy. Will most people check this out to see if their acting skills have improved at all, or look for another dose of weirdness and something to make fun of?

Fathom Events is testing the devotion to Wiseau and Sestero with a special release for Best F(r)iends, split into two parts. Volume One will play March 30 and April 2, with Volume Two following up on June 1 and 4. All shows are at 8:00 p.m.

This teaser for Netflix’s Lost in Space remake doesn’t really show very much, other than archival news footage. But those clips do drive home the point that Earth is probably destined for an untenable and uninhabitable future, which might motivate families such as the Robinsons to travel into space and find another planet to colonize.

Molly Parker (House of Cards) as Maureen Robinson is the only immediately recognizable face among the cast, though Taylor Russell as Judy is notable for showing that the family won’t be completely white. Parker Posey will play Dr. Smith, but is nowhere to be seen here. And where’s the robot, Will Robinson? Is that reveal being saved for the series’ premiere? There’s plenty of time between now and April 13 for another trailer, of course.

Saoirse Ronan has always been an actress worth watching. If she wins the Best Actress Oscar for her performance in Lady Bird, she may reach must-see status.

But On Chesil Beach isn’t a slice-of-life comedy. Based on an Ian McEwan novel, it figures to be a deeply emotional drama, depicting the story of a young marriage that falls apart due to lack of intimacy. The novel follows these characters into their sixties, but the trailer doesn’t indicate whether or not the movie will take that same route.

Forest Whitaker is virtually unrecognizable under prosthetics and make-up as Bishop Desmond Tutu in this fictionalized account of real-life events taking place at the end of Apartheid in South Africa. Hopefully, that isn’t too much of a distraction and Whitaker’s performance shines through.

Eric Bana (who should be a bigger star than he is) plays a role that was originally going to be played by Vince Vaughn, portraying serial killer Piet Blomfield. Serving a life sentence for his crimes, Blomfield can help with an investigation into a missing black girl. But he also seeks redemption, despite committing unforgivable acts.

The dialogue between the two characters looks like the strength of The Forgiven. Blomfield tests Tutu’s compassion and faith with his bigotry. But is it possible to forgive and absolve with the end of Apartheid?

Was it necessary for The Outsider to make an American the main character and cast Jared Leto as a captive soldier set free by the Yakuza who repays his debt by working for the crime syndicate? That’s the subject of significant controversy and criticism for this film.

While the Yakuza has allowed non-Japanese — notably ethnic Koreans — into their ranks, there’s apparently no historical basis for a white American working for the organization. So shouldn’t this role have been written as an Asian, played by an Asian actor? (It should be noted that Tom Hardy was once attached to this project, along with Japanese director Takashi Miike. Prior to that, Michael Fassbender was circling the lead role.)

That kind of backlash may be why this movie is now on Netflix, instead of getting a theatrical release.

What makes Yardie notable is that the film is the directorial debut for Idris Elba. While a Jamaican crime thriller set in London sounds intriguing for not being the type of movie we normally see, Yardie didn’t draw good buzz at the Sundance Film Festival.

Ultimately, this might be more notable for showing whether or not Elba has a good filmmaker’s eye and can tell a good story. (The footage in this trailer looks promising.) If so, we might get to see move on to bigger and better things behind the camera. Although his career as an actor should probably keep him busy in the near future.