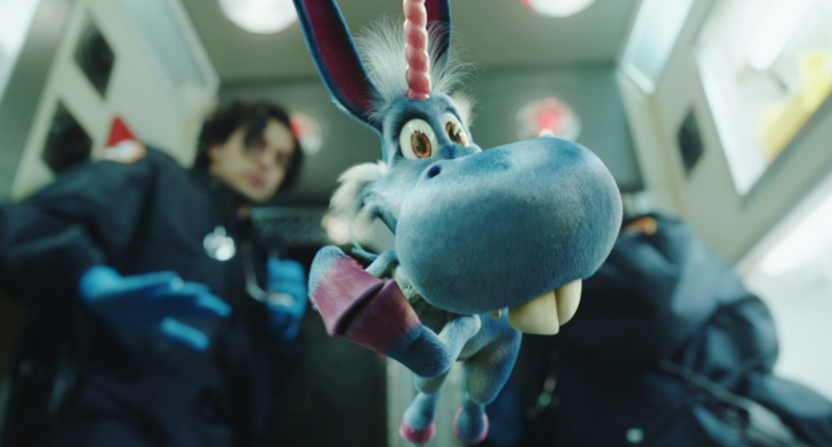 Several sci-fi and comic book movie trailers are being released with this weekend’s New York Comic Con. (The big one, Justice League, will debut on Sunday.) But this week’s previews weren’t all genre and geek fare. We got a look at Denzel Washington’s new movie and an upcoming series with a familiar name from Amazon.

Here are the best movie and TV trailers from the past seven days.

Pacific Rim was a good dose of summer fun and nostalgia for those who grew up watching giant robots taking on giant monsters (whether in live action or animation). It wasn’t necessarily a hit in terms of popularity or box office cash, but apparently did well enough worldwide to warrant a sequel.

As you might expect from a follow-up, Pacific Rim: Uprising is providing more Jaegers, more (and bigger) Kaiju, and even more blockbuster action with cooler, more lethal weapons. That will probably make up for the lack of star power (apologies to John Boyega), though a few actors — Charlie Day, Burn Gorman and Kinko Rikuchi — are returning for this sequel.

Marvel unveiled the trailer for its latest TV series at New York Comic Con. Runaways, based on the comic book by Brian K. Vaughan and Adrian Alphona, the series follows a group of teenagers who discover that their parents are a criminal group of supervillains called “The Pride.”

The kids, who don’t really get along and come from a variety of backgrounds, learn they’ve inherited their parents’ superhuman abilities and use them (along with other resources they’ve stolen) to oppose the adults’ scheme.

Another series based on a graphic novel, this one by acclaimed writer Grant Morrison, Happy is a dark comedy about a cop-turned-hitman (Christopher Meloni) who suffers a near-death experience and sees a cartoonish blue unicorn named Happy (voiced by Patton Oswalt) upon being revived.

Happy is the imaginary friend of a little girl who’s been kidnapped, and the unicorn compels his new hitman buddy to try and save her. Is the flying blue horse a delusion brought on by heavy drinking and drug use, not to mention almost dying? Based on the trailer, the series looks dark and twisted, providing quite a twist on graphically violent, antihero crime thrillers.

In my opinion, Dan Gilroy wrote and directed the best film of 2014 in Nightcrawler. So his follow-up project is surely worth a look. Roman J. Israel Esq. has drawn comparisons to 1982’s The Verdict, in which Paul Newman starred as a brilliant lawyer who’s fallen on hard times, but has a case thrown in his lap that allows him to redeem his career. If so, this movie will give Denzel Washington one of his best roles.

At the very least, Israel looks like a hilariously abrasive personality capable of pissing off anyone and everyone. But if the story starts out as more of a comedy, it apparently gets quite serious as Israel takes on a case with far-reaching implications. Is he being set up as a patsy by a high-powered law firm (led by Colin Farrell’s slick attorney)?

The first look at Amazon’s new Jack Ryan series, starring John Krasinski, is every bit a teaser, revealing very little about what’s to come. The short preview indicates that this will be a grittier, down-to-earth version of Ryan, focusing on his days as a CIA analyst before he became an operative, agency director and academic later in his career. As we briefly see, Ryan is put in the field for the first time to help take down a terrorist plot.

Amazon originally announced the release date for the eight-episode series as March 2018, but has since backtracked from that. Jack Ryan is still expected to debut early next year.

The Last Starfighter is a 1980s film that’s ripe for a movie remake. It looks like we’ll be getting a TV version of it instead with Hulu’s Future Man, which leans right into the Starfighter comparisons with a reference to it.

But the series works in a time-travel concept that prevents it from being an outright copy and apparently mines plenty of comedy from going back to the 1980s to prevent someone from getting herpes. That guy grows up to be a scientist whose planned cure for the disease ends up wiping out humanity. Based on the trailer, this could be a lot of fun.

Is Replicas a movie about clones or robots? Based on this first trailer, the answer appears to be… both? Keanu Reeves plays a scientist who lost his family and brings them back as clones, which sounds like an intriguing movie in itself. Do the clones realize they’re replacements for people who died? Are they the same wife and kids for Reeves’s character?

So where do the robots come in? (It’s also not encouraging that the robot here looks very much like those in 2004’s I, Robot. Hey, maybe this could be thought of as a prequel!) Is this also a story about artificial intelligence run amok? Did the scientist lose sight of something after becoming obsessed with reviving his family? Will this movie be a complete mess?