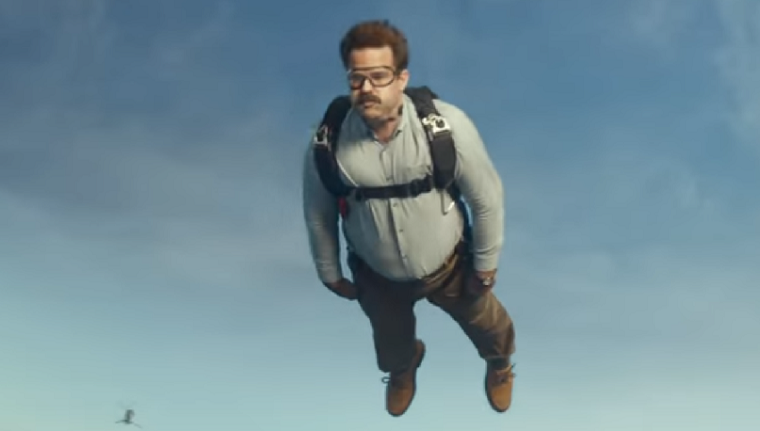 Trailers! They’re one of our favorite things here at The Comeback. Sometimes, these previews better than the movies or TV shows they’re promoting. But a good trailer is also a form of entertainment all by itself.

This week included some big trailers with the final looks at Deadpool 2 (along with a new character who’s sure to be popular) and Jurassic World: Fallen Kingdom prior to the many, many TV spots to come over the next few weeks, Denzel Washington beating everybody up because they messed with him, and a movie that feels like it’s ripping off a John Wick premise.

Usually by the time a movie’s final trailer rolls out, there’s nothing new to be offered. It’s time to see the movie. Just don’t spoil anything, please. Deadpool 2 hits theaters in a month. We know it will include Cable (Josh Brolin), who has some great fight scenes with Deadpool — particularly the one with Deadpool slicing away a bullet followed by Cable just firing more shots . Why doesn’t that happen in more movies? Not as cool a slow-motion shot, maybe.

Oh, and there are shots at other superhero movies with lines like “Pump the hate brakes, Thanos” and “So dark… are you sure you’re not from the DC universe?” Some might not be  in the final movie, but make for some great online chatter among fans.

This third trailer is largely devoted to Deadpool’s misfit team of mutant superheroes named X-Force, introducing the new characters that will join this wacky corner of the X-Men movie universe (which may be under the Disney-Marvel umbrella next time we see them). Teaming up with Deadpool are Domino (Zazie Beetz, who presumably has a larger role in this movie), Bedlam (Terry Crews, who should’ve been in a superhero flick long ago) and Shatterstar (Lewis Tan).

Shatterstar sure looks like a parody of the character from Marvel Comics — he looks like a Saturday Night Live spoof — but Tan has done action in plenty of TV shows and movies so maybe his character is no joke.

But the standout of this trailer is Peter (Rob Delaney) — a seemingly regular dude, maybe a father recently laid off and looking for work — who saw the ad for X-Force and wants to join up, despite not having any superpowers. Good enough for Deadpool! The quick cut to Peter being among the team skydiving into battle is the best moment of the trailer and maybe the best moment of any trailer in 2018. The comic timing is brilliant, as is the visual.

Will Peter actually have much of a role in Deadpool 2? Delaney isn’t some chump; he was presumably hired to play a decent part. Plus, Peter has a Twitter account! Hopefully, they didn’t use up the best gag with him in the trailer.

But as this trailer reveals, trying to rescue the dinosaurs from a natural disaster on Isla Nublar is just a trick to get the creatures into the hands of an organization that seeks to auction them off, presumably either as very exotic pets or as lethal weaponized operatives. (That ties back to Jurassic World, in which the dinosaurs were being trained for military use.) And just to show that no one ever learns any lessons in this story, a new form of dinosaur (a hybrid of T-Rex and raptor?) has been created.

What could possibly go wrong? Can Owen, his raptor buddy, Claire and Dr. Ian Malcolm (Jeff Goldblum) save the world?

We knew Denzel Washington would be back as Robert McCall! The Equalizer, a TV series remake, was a hit in 2014, earning $192 million at the box office. Between that financial success and the entertainment that comes with Denzel beating the crap out of people (Liam Neeson isn’t the only older guy playing action hero), there was bound to be a sequel. This time, a friend of McCall is killed by a mysterious organization and her daughter is kidnapped.

Who would do such a thing? Somebody who knows McCall and worked with him in the CIA, it appears. Pedro Pascal is the old friend who apparently either helps him or is behind the whole scheme. judging from what we see here.

An international trailer was also released, which explains the story more clearly. It also includes some different footage, notably Denzel beating up a bunch of thugs in a hotel room instead of a train. How many action heroes can turn a credit card into a lethal weapon?

Also returning are the Gorgeous Ladies of Wrestling in Season 2 of Netflix’s GLOW. Not only was the 80s setting popular with viewers, but a largely female cast telling the story of women asserting their power in a medium that would presumably exploit them makes the series resonate in our current culture.

Season 2 picks up right where the first season left off. The TV show that these female wrestlers and a down-and-out director worked so hard to produce has finally hit the air. How will people respond? Ruth (Alison Brie) and Debbie (Betty Gilpin) will again be the center of the series, their friendship affected by what happened at the end of Season 1.

This trailer is mostly a teaser intended to announce that GLOW will return on June 29. But if you’re a fan of Michael Sembello’s “Maniac,” it’s fun to see the wrestlers dancing to it in the locker room. Who doesn’t like that song? Well, except Sam Sylvia (Marc Maron). Somebody’s gotta be the boss.

One of the most intriguing concepts in the John Wick movie series is The Continental, the luxury hotel where the hitmen and mobsters of the underworld can recuperate and relax without worrying about business interfering. What if a whole movie was made out of that idea? That seems to be where Hotel Artemis is coming from.

Although in this story, the hotel seems to be more of a safe house in a dystopian society, where criminals can hide out and get patched up. At the heart of the operation is The Nurse (Jodie Foster), who helps out the criminal element as best she can. But there are rules to follow.

The premise may be derivative, but the cast is strong, including Sterling K. Brown, Sofia Boutella, Dave Bautista, Charlie Day, Jeff Goldblum and, of course, Jodie Foster in a role few would’ve expected to see her in. Directed by Drew Pearce — who also wrote Mission: Impossible – Rogue Nation and Iron Man 3 — this movie looks like it could be a lot of fun with some great action.

A Quiet Place has been the horror hit of 2018, but Hereditary appears to be even creepier or scarier. Obviously, that doesn’t mean it will be a better movie, nor be as crowd-pleasing as A Quiet Place was.

But this movie about a family that’s discovering dark secrets about its ancestry after their matriarch passes away could have plenty of people squirming in their seats and a bit unsettled as they leave the theater. Milly Shapiro as the youngest daughter Charlie looks kind of frightening, haunted (or possessed?) by something and terrorizing her family (perhaps unwittingly). This movie drew significant buzz out of Sundance for scaring audiences.

Prediction: Life of the Party is going to be the underrated hit of the summer. The Mother’s Day weekend release is perfect, giving mothers and daughters a chance to enjoy an afternoon or evening at the movies.

It’s also counter-programming for the moviegoers who don’t want to see The Avengers — or Deadpool 2 and Solo: A Star Wars Story. Tully, which also deals with the struggles and sacrifices of motherhood, could be that too, but I don’t think Charlize Theron (nor a film written by Diablo Cody and directed by Jason Reitman) will appeal to as wide an audience as Melissa McCarthy.

Life of the Party also has the additional theme of husbands who leave their wives for a younger “upgrade,” possibly while going through a mid-life crisis. Watching McCarthy’s ex-husband in the film (played by Matt Walsh, Veep) will be satisfying to many people. Maybe Julie Bowen’s trophy wife should watch out too.

Or people might just get a kick out of an older person going back to college, kind of like what Blockers offered with parents at a high school party. Leave the butt-chugging to John Cena, though.