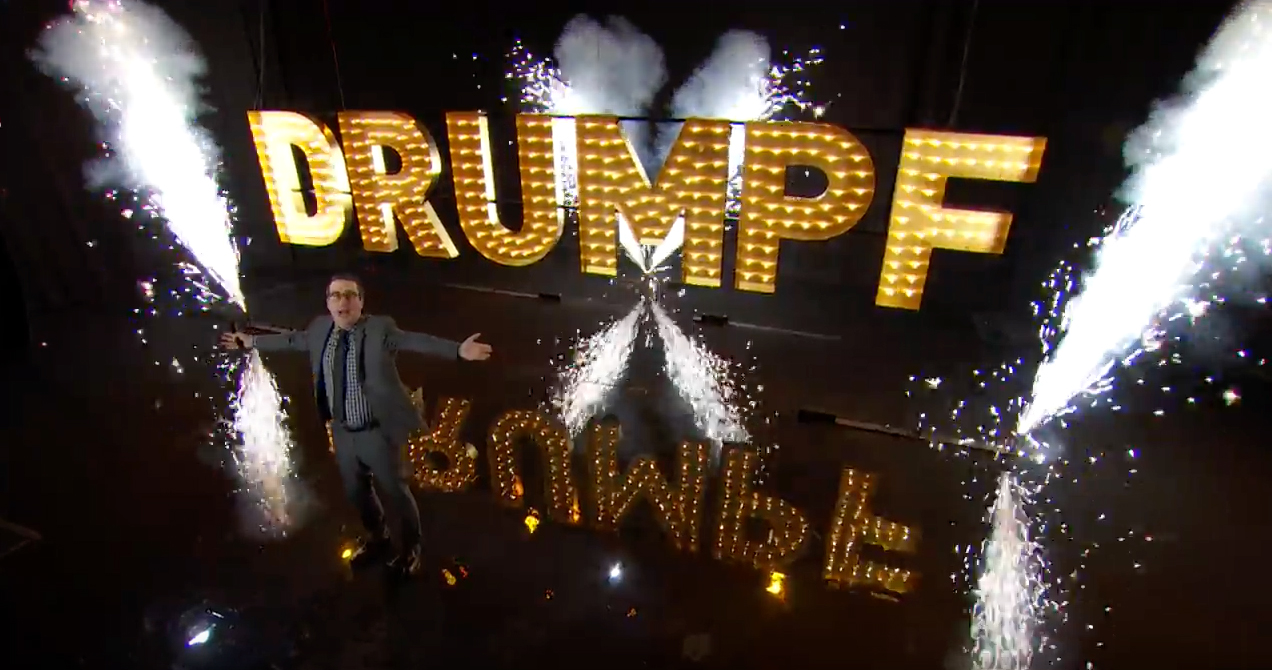 If you’ve been living under a rock, you may not know that Donald Trump is one day from officially becoming the presumptive Republican nominee for President of the United States. Leading in the polls as the candidates head into Super Tuesday, Trump is primed to be the real, actual, holyshitnobodycanbelievethisbutithappened candidate for the GOP in 2016.

If you’ve been living under that rock…is there any more room? Because if Donald Trump actually becomes President of the United States, it might be the safest place to hide.

Only, there is no hiding from Trump, and everything that comes out about him that would have certainly taken down another candidate has only managed to make him stronger. Enter John Oliver, who decided to spend the final segment of his HBO program Last Week Tonight debunking the myth that is Trump.

For those who can’t watch right now, find a way to watch it later. Hell, quit your job and just go in the parking lot on your phone and watch it right now. If Trump becomes president we’re all getting fired in spectacular fashion on network television and moving to Canada anyway, so this just gets you in line at the border that much sooner. (Note: don’t go to the southern border, the wall will be impossibly hard to climb.) Alas, here are a few highlights:

Oliver calls Trump out for “telling it like it is” by pointing out several times Trump has openly lied about things.

“I’m not even sure he knows he’s lying,” Oliver admitted. “I think he just doesn’t care about what the truth is.”

Oliver debunked Trump’s claim that he’s funding his own campaign. It’s a loan, but Trump can say he’s funding the campaign up to the minute he actually uses the donations people are sending him to pay himself back. By then it will be too late to matter if he’s lying.

Oliver took issue with Trump continuing to claim he’s telling the truth about funding his campaign too. “‘I’m rich, therefore I tell the truth,'” Oliver said, “has the same internal logic as ‘I’m a vegan, therefore I know karate.’ There is no cause and effect between those two and the correlation usually goes the other way.”

It is uncanny how Trump has found a way to dupe people into thinking he is trustworthy BECAUSE he is rich. Is there any other rich person in the world who this many people trust? Hell, I bet Bill Gates probably gets the side eye from more people than Trump does at this point, and that guy gave away more money than Trump has ever been worth. To use his perceived wealth as a reason to trust him shows just how delusional Trump is. Only…it’s working. He’s winning. Even if he’s lying in order to do it.

Oliver spends the bulk of the segment honing in on Trump’s finances, and how he is able to wildly overinflate his business successes, pointing out that Trump once said in a lawsuit deposition that his net worth changes based on “feelings, even my own feelings…and that can change rapidly from day to day.” 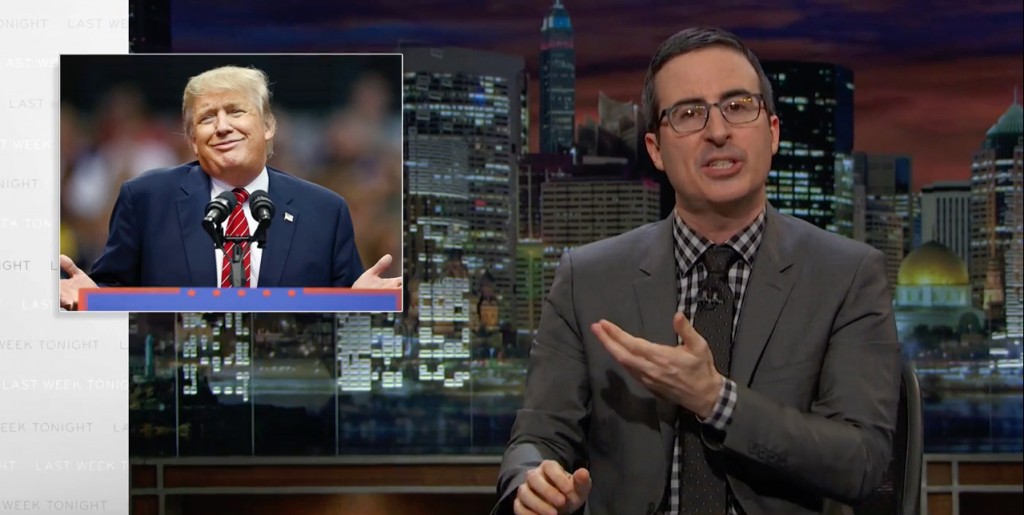 “Think about that. He claimed that his net worth changes depending on his mood, which makes absolutely no sense, partly because he always seems to be in the same mood; specifically, smug yet gassy.”

Oliver attacks Trump’s loose ideas on policy, which seem to change depending on who he’s talking to or who he thinks will actually vote for him. At one point in his life, Trump was a pro-choice liberal, and now, because Republicans have been mesmerized by his political voodoo, he has doubled-down on the conservatism and, frankly, the racism.

After playing the clip of Trump saying he would go after the families of ISIS members to “take them out,” Oliver simply states that is the frontrunner for the GOP nomination “advocating a war crime.”

Trump’s David Duke debacle on Sunday—which he conveniently blames on a faulty ear piece despite no other issues during the CNN interview with Jake Tapper—led Oliver to this very valid point: “…with an answer like that you are either racist or you are pretending to be, and at some point, there is no difference there.”

And then the real claws came out, where Oliver attacked the Trump name and how the self-reported billionaire has made his riches off said name, which, as Oliver points out, is not his real family name.

“It turns out the name Trump wasn’t always his family’s name. One biographer found that a prescient ancestor from, and this is true, Drumpf…and Drumpf is much less magical.” 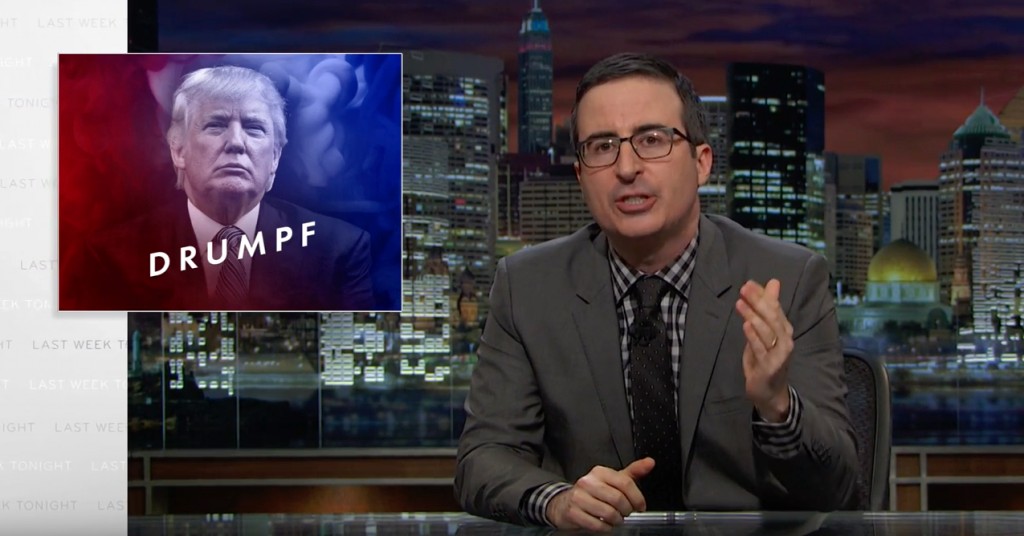 “If you are thinking of voting for Donald Trump, the charismatic guy promising to make America great again,” Oliver warned, “stop and take a moment to imagine how you would feel if you just met a guy named Donald Drumpf—a litigious, serial liar with a string of broken business ventures and the support of a former Klan leader who he can’t decide whether or not to condemn.”

Oliver has tried to trademark the word Drumpf and owns DonaldJDrumpf.com where people can download a plug in to change the word Trump to Drumpf in every webpage his name appears. And they are selling hats!

The takedown is as good as any Oliver has had, but in some ways, Oliver went easy on Trump, er, Drumpf.

This man, who may be one day from being one vote from becoming the leader of the (for how long) free world, was nothing more than a rich but otherwise totally irrelevant reality TV star who made his fortune off nothing but his own name.

He’s a Kardashian, only when he’s standing with his inexplicably increasing number of supporters, he’s the one with the biggest boobs.

All of this, of course, makes Trump more popular and famous than yesterday, and we should all be ashamed of ourselves for even feeding this beast of a man. It’s the media’s fault as much as anyone. That said, Oliver may not have changed the game by going after Donald Drumpf, but he certainly changed the name.