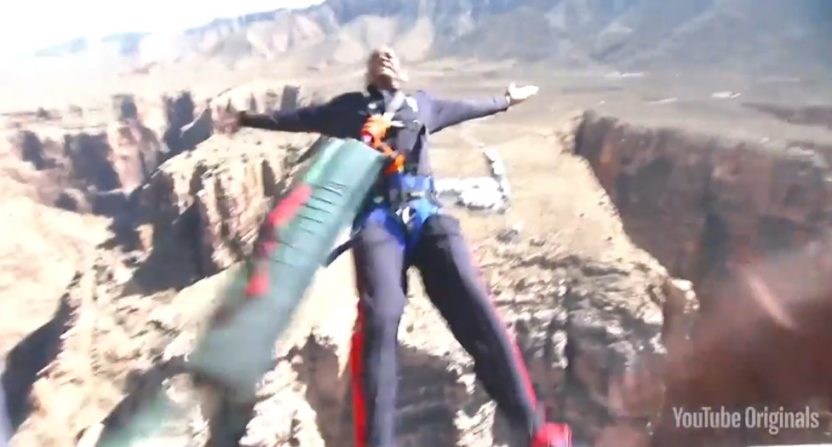 Back in the 90s during the heyday of The Fresh Prince of Bel-Air, Will Smith and Alfonso Ribero probably didn’t imagine 2018 would see Ribero hosting a YouTube stream of Smith’s 50th birthday bungee jump out of a helicopter into the Grand Canyon. But life works in mysterious ways, as Canadian Press pop culture reporter David Friend relayed:

Alfonso Ribeiro, aka Carlton Banks from "The Fresh Prince of Bel-Air," is hosting Will Smith's heli-bungee jump for this 50th birthday on YouTube.

Will Smith has completed the heli-bungee jump…letting a few expletives slip out, which, judging by the audio dropouts YouTube seemingly failed to mute. pic.twitter.com/uS940eBN6t

Oh, also, Smith realized afterwards he should have made a Fresh Prince reference, even if that one didn’t end as well.

That clip does contain the great Smith line of “I ain’t no bungee expert or nothing, but I don’t think he’s supposed to be slamming into the ground like that.” And Smith appeared to use that knowledge well Tuesday. Here’s the after-the-fact, eight-and-a-half minute edited version of his jump:

That’s quite the event, and quite the way to celebrate. And it sounds like there may be more to come.

"It's like the whole Grand Canyon is mine!"
– Will Smith describing his heli-bungee jump experience before saying he'd do it again.

We’ll see if there’s a sequel or not, but Smith certainly gave the world plenty to talk about with this jump. All this needed was a giant mechanical spider. After all, that worked out well for everyone involved!