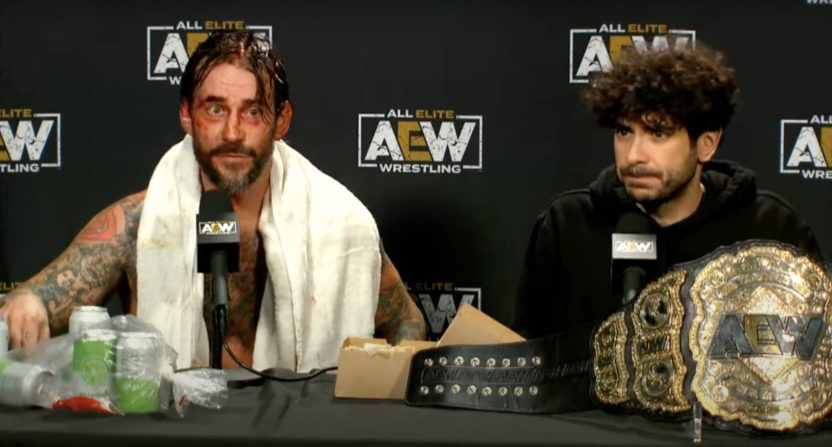 AEW has been in a state of turmoil since the end of All Out Sunday night.

To summarize, after CM Punk completely trashed Colt Cabana and “Hangman” Adam Page for previous situations with Punk and accused AEW EVP’s Kenny Omega and the Young Bucks of leaking things to the pro wrestling media in a post-All Out media scrum, Omega and the Bucks confronted Punk. That led to a massive altercation with Nick Jackson reportedly having a black eye after getting a chair thrown at him and Omega getting his hair pulled and bit by AEW producer/CM Punk’s trainer Ace Steel. At the moment, all of this is not part of any storyline.

Three days have passed and we have heard a bunch of reports but nothing from AEW CEO Tony Khan, who was sitting right beside Punk in the media scrum. Khan is usually active on social media but had been in radio silence since All Out until Wednesday afternoon. On Wednesday, Khan tweeted that he will “address the AEW World Championship and the AEW World Trios Championship” on tonight’s Dynamite.

Thank you everyone who watches @AEWonTV!

Khan doesn’t use their names but CM Punk is the AEW World Champion and The Elite (Kenny Omega, Matt Jackson, and Nick Jackson) are AEW World Trios Champions and those four were the main wrestlers involved in the confrontation so whatever Khan says will directly or indirectly revolve around them.

There was a report from Sports Illustrated that along with The Elite, Young Bucks’ friend Brandon Cutler, Omega’s friend Michael Nakazawa, producer Pat Buck, and head of talent relations Christopher Daniels have all been suspended for their roles in the altercation, with Punk and Steel either being suspended or fired.

Who knows how much detail Khan will go into tonight. Whether it’s a shoot or a work, AEW doesn’t like to mention things that are legit or things they want people to believe are legit. Like not talking about MJF all summer after his rant back in June. Fightful reported that Punk injured his triceps during the All Out match and will require surgery so it’s possible that, plus Nick Jackson’s injury, might be the extent of what Khan talks about and share how that affects the titles they hold, while keeping the behind the scenes stuff as hidden as possible.

Whether or not this is a good look or a bad look for AEW, people are probably going to tune in to Dynamite to see what Tony says.