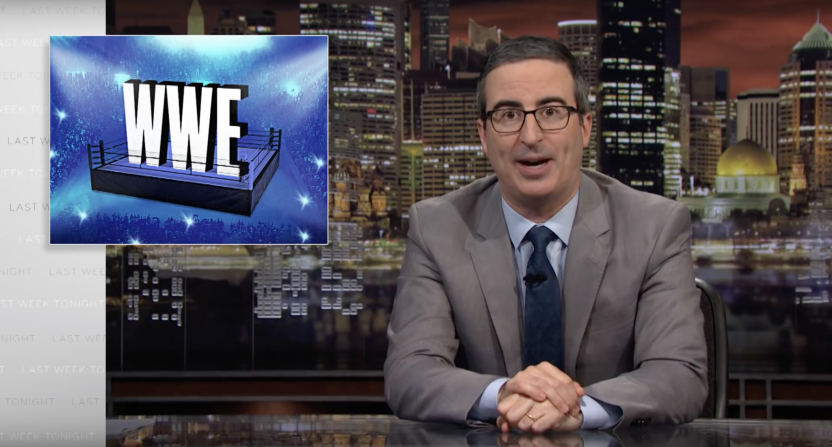 Professional wrestling is a strange industry. Most wrestlers will admit there’s probably something off about them when they voluntarily get punched, kicked, and hit with various weapons for a living, all for our entertainment. It’s not an industry too many would get into and while the results are predetermined, it’s not fake. Some things can be worked on so it doesn’t hurt as much as it should but it’s still painful and people get hurt all the time.

On Sunday night’s Last Week Tonight, John Oliver discussed the rate of premature deaths of WWE wrestlers and the independent contractor issue that has been a thorny part of WWE and the wider professional wrestling since the beginning. To pro wrestling fans who like to read dirt sheets and know as much as possible about the industry, this has been common knowledge for years, but it may have been something that the mainstream audience did not know much about.

Oliver’s segment took up the bulk of the episode, covering the days of the territories through Vince McMahon’s purchase of WCW to consolidate the upper tiers of the industry back in 2001.

Back in the territory days, the concept of independent contractors made sense. Unless you were a mainstay like Hulk Hogan in the WWF, many wrestlers would go from territory to territory and get paid to go out and wrestle. This setup worked because wrestlers could try out new things with their character since these were regional territories, and fans living in other regions wouldn’t know their style. In addition, promoters were able to refresh the talent pool, give fans new and different matchups, and keep them coming back.

Since WWE took over and spread their product across the world, they have a virtual monopoly on the pro wrestling industry. Yes, there are plenty of independent organizations and some international ones like New Japan Pro Wrestling are huge, but none can compare to WWE. Because of that, the concept of independent contractors is antiquated because wrestlers are exclusively contracted to WWE and that their services directly benefit the business. And as Oliver states, you can’t really apply the old logic for independent contractors to today’s WWE and its talent.

In this case, “independent contractor” is merely a term that WWE uses to not provide benefits, such as health insurance. This is similar to how some companies treat freelancers, who are non-contracted employees that don’t get benefits. I am a freelancer, but I am also free to work elsewhere. This is how it should be, but not every company allows their freelancers to work for other places (which seems to run contrary to being a freelancer).

In an industry that is hard on someone’s body, health insurance is a very important thing to have. Among the cuts and bruises, it’s only a matter of time before someone gets a serious injury. Even though WWE will pay for injuries that take place in the ring, they aren’t required to take care of some of the nagging injuries and potential drug addictions some develop to try and treat their injuries.

Because of that, many wrestlers have died prematurely. Oliver mentions Eddie Guerrero (heart failure at 38 due to steroid use and prior addiction), Randy Savage (car crash at 58 due to heart disease), Chyna (overdose at 46 of multiple drugs and alcohol, also had substance abuse problems), King Kong Bundy (who recently died at 61), and “Rowdy” Roddy Piper, who said in an interview he wouldn’t live to 65. Piper died at 61 due to a heart attack caused by a pulmonary embolism.

Vince McMahon was shown to not have much compassion about why wrestlers have been dying at younger ages. In one clip, he was even shown to make faces and knock the papers out of an interviewer’s hands when asked about that. In some ways, that could also be the Mr. McMahon character, but much of the character is based on his real-life persona.

In the 23 minute video, Oliver shows he’s a wrestling fan and has a higher knowledge of the situation than other attempts by others to shine a light on these issues. However, he’s overestimating how WWE fans would react to this revelation. Oliver claimed that WWE listens to their fans and while that might appear to be true, there’s an important disclaimer: WWE will only listen to their fans if it means they can make money.

One example Oliver listed was the fan generated #GiveDivasAChance movement that sparked WWE to make the women’s division into a legitimate competition. Now, a women’s match is main eventing WrestleMania for the first time. Call me cynical, but listening to fans seemed like a nice narrative to mask that WWE really changed their view once they noticed they could make money on a women’s division. Oliver himself ran a segment on WWE events in Saudi Arabia, and even though fan response was enough to make WWE not refer to Saudi Arabia on their broadcasts, it wasn’t going to keep the company from holding the event because they aren’t turning down a nine-figure payday for one event from anyone.

Oliver also suggested tat people make signs and chant about giving wrestlers health insurance, but he may have thought too highly of WWE fans, considering many had more of an issue with a Roman Reigns joke than wrestlers not having health insurance. A section of the fanbase took offense to a joke about how Reigns’ constantly wet hair made him look like “a pedophile out for a jog.” Was the joke funny? No, and the live audience didn’t even react well to that one. But if that joke made someone believe that it invalidated everything else Oliver said, then they never really agreed with Oliver in the first place and were looking for anything to latch onto in order to ignore his segment.

His ideas for making WWE change their mind and not make their talent be independent contractors are nice, but will likely be ineffective. For one thing, given the news cycle, non-wrestling fans will probably forget about this by the end of the day (if they haven’t already), so that’s not going to be an avenue to go down. In addition, WWE, like any corporation, largely doesn’t care about what non-consumers of their product think. If you are a WWE fan and you feel strongly about wrestlers receiving health insurance, there are a couple things to do. One is to look beyond WWE and go to local independent shows. They may not be people you know, but these people are living out their dreams, are getting the same bruises for a fraction of the pay as a WWE star, and also aren’t getting health insurance either. In addition, they can work for multiple organizations and won’t be stuck working for just one. Support independent organizations and get to know the talent, because you’ll probably get closer to them than to Seth Rollins and maybe they can make more money.

Another thing that a fan can do is support AEW and make them a legitimate competitor to WWE. All Elite Wrestling has the money and if they get the right TV deal, they could be a thorn in WWE’s side. The talent is there, and more importantly, the organization is run by wrestlers and not a promoter like Vince McMahon. While at first, AEW will mirror WWE’s policy at first about only paying for injuries that take place in the ring, they are open to providing health insurance for certain talent in the future. This could be similar to WCW providing guaranteed contracts in the 90s, forcing WWE to provide downside guarantees in their contracts, which remains to this day. Given that there’s no union and no motivation for Vince McMahon to make any changes, it might take an outsider to disrupt the monopoly and force WWE to make changes to appease their talent, knowing that there could be another place for them.

In the end, pro wrestling is a microcosm of America. Because so many wrestlers don’t have health insurance, many have resorted to asking the public and fans for money via GoFundMe to get the surgery they need. Isn’t that the case for Americans who cannot afford health insurance on their own? WWE not providing health insurance for their wrestlers is bad, but they’re far from the only company to not provide insurance for their employees. While I’m happy there are so many kind people out there who are willing to donate money to help a complete stranger or someone they were entertained by for years, it’s disheartening that we live in a country where millions of people have to do that to stay alive and we as a society treat it as a positive and uplifting story. While WWE has evolved from the kinds of hits wrestlers take and they pay for injuries in the ring, it’s still not enough.