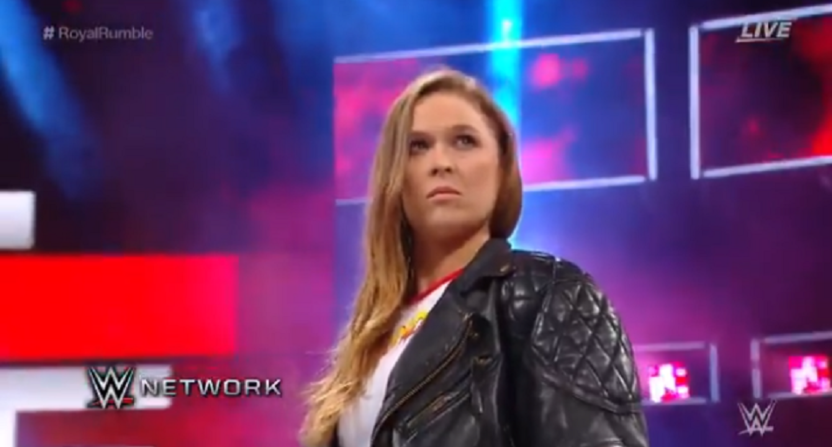 Former UFC superstar Ronda Rousey made an appearance at the end of Sunday night’s WWE Royal Rumble in Philadelphia, and pointed at a WrestleMania sign hanging in the Wells Fargo Center.

ROWDY @RondaRousey is HERE in Philadelphia at @WWE #RoyalRumble!!! pic.twitter.com/Aue3HOrJIT

Everyone's eyes are on #WrestleMania 34…

While Rousey’s appearance was news on its own, the much bigger story to come out of the night is that Rousey has signed a full-time WWE contract.

UFC's Ronda Rousey has signed a full-time contract with WWE, according to ESPN’s Ramona Shelburne. pic.twitter.com/ZeGZeSnwHZ

ESPN’s Ramona Shelburne had the report, with comments from Rousey on the decision. Rousey said, “This is my life now.”

“This is my life now. First priority on my timeline for the next several years. This is not a smash-and-grab; this is not a publicity stunt,” Rousey told ESPN’s Ramona Shelburne of her decision to join WWE. “When I first met with Triple H, I told him, ‘There are other things I can do with my time that’ll make way more money, but I won’t enjoy nearly as much.'”

And it seems clear that ESPN was very aware that something was going to happen on the Rousey/WWE front.

Front page of https://t.co/vGEOLUvYtS right now is a story on @RondaRousey's move to the WWE. Yeah, I'd say ESPN knew what was up. #SIhadLeBrontotheCavs

The news isn’t all that surprising; the former UFC women’s bantamweight champion has been an actress and entertainment star in recent years to go with her sensational MMA career. Rousey and WWE seem like a natural fit, and you’d have to think WWE will do everything to ensure she’s one of the biggest stars in wrestling.

My road to #wrestlemania begins https://t.co/ECrftMfF8T

Ronda told me she's been training at the WWE performance center for several months. She'd travel down there on weekends while she was filming in Atlanta. In other words, she's close to fighting shape.

As for her entrance music, I'm told WWE had to get special clearance from Joan Jett's camp for Ronda Rousey to use "Bad Reputation" at the Royal Rumble Sunday night in Philly as she did for years in the UFC.

Vince McMahon will leave nothing on the table. pic.twitter.com/AONytuZWkg