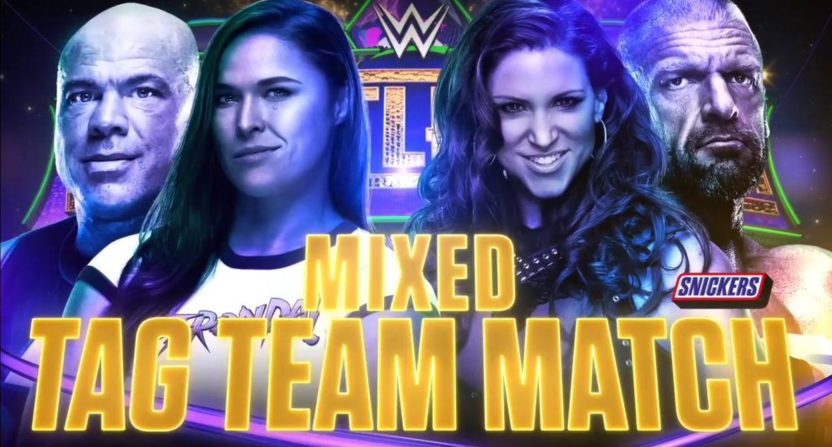 The first match of Ronda Rousey’s WWE career will take place at WrestleMania 34 on April 8 in New Orleans. The match was officially announced on this week’s episode of Monday Night Raw, which took place in Milwaukee.

Raw started with general manager Kurt Angle calling out Triple H because on last week’s Raw, Triple H decked Angle with a cheap punch to the head that he wasn’t ready for. Instead of Triple H, Stephanie McMahon (wife of Triple H, who’s also the Raw commissioner) entered to try to calm Angle down and to remind him that he’s management now, so he can’t just be out there calling people out for a fight.

When Ronda Rousey entered, the fans went wild for her. They see her as a superstar and for the doubters, they should listen to the people because they are firmly behind Rousey in her WWE career. Stephanie tried to suck up to her saying that she was providing Rousey with her dream of wrestling at WrestleMania.

Rousey pointed out that her contract said she could choose her opponent for a match at WrestleMania. Stephanie said sure, as long as it wasn’t a champion and it was somebody on the active roster. Rousey got in Stephanie’s face and said: “You!” Rousey didn’t say it loudly enough because the microphone wasn’t close enough to her face, but the crowd reacted to it in a big way with “yes” chants.

The crowd loved the announcement and were cheering loudly for it. 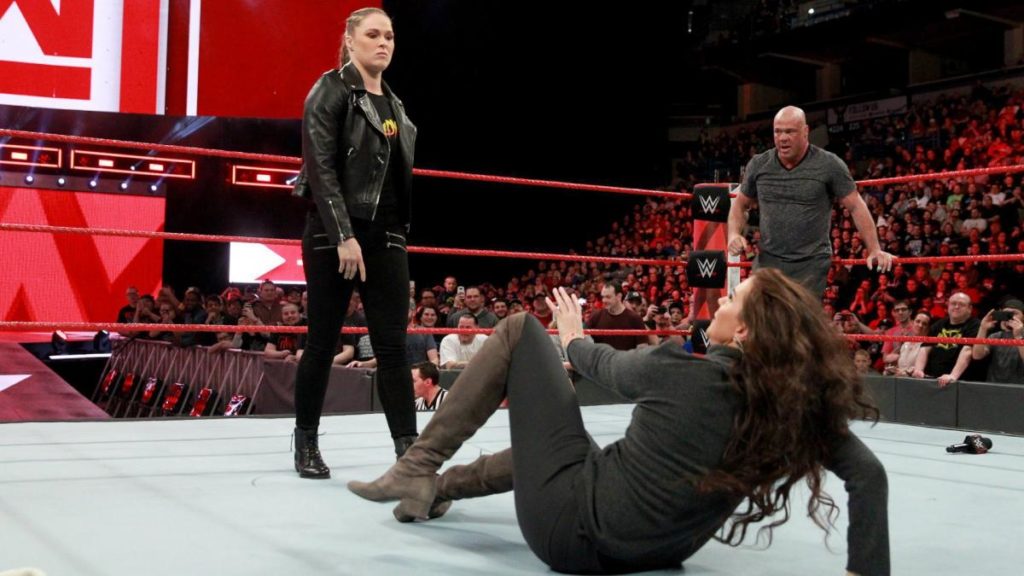 With the match official, that’s when the physicality started. Stephanie tried to slap Angle, but Rousey blocked it and Hunter helped Stephanie out of the ring. Angle went for the Ankle Lock on Triple H, but Triple H kicked him into the turnbuckle. Stephanie hit Rousey with a forearm to the back, Rousey no-sold it and scared her out of the ring with Stephanie comically running away. Angle slipped out of a Triple H Pedigree attempt and slapped on the Ankle Lock.

Triple H sold it really well. It was a nice throwback to their rivalry during the Attitude Era in the early 2000s.

Stephanie was at ringside helping Hunter, so Rousey grabbed Stephanie by the hair and brought her into the ring. Rousey put Stephanie on her shoulders and hit a Samoan Drop. That drew another big ovation because it’s rare for anybody to beat up Stephanie like that. It was cool to see Rousey hitting a wrestling move like that, even though the form wasn’t perfect.

Dear @RondaRousey Good job
Ask @TheRock @NiaJaxWWE @TaminaSnuka @WWERomanReigns @WWEUsos for Samoan drop help. You are trapping your own arm, causing opponent to land on ur arm & shoulder
will mess you up#CONCERNEDCitizen#RAW

Dreamer is right. Rousey’s arm was under Stephanie when she landed, so Rousey could hurt herself doing it that way. I’m sure she’ll figure it out as she gets more experience.

I thought the segment was excellent. It was the best part of Raw, which was boring for the rest of the night. It was smart to put it on the opening segment because that’s when the crowd is the hottest and if you put this on three hours later, there’s no way the crowd would have cared so much because they get tired.

A big reason why they loved it is because Stephanie has been a main heel in WWE for many years with no women putting their hands on her, so to have Rousey scare Stephanie out of the ring and drop her with a Samoan Drop was so rare. Angle and Triple H looked like they hadn’t missed a beat, even in their late 40s.

While the match is obviously huge for Rousey, it’s also big for Angle because it’s his first WrestleMania match since WrestleMania 22 in 2006. Angle returned to WWE last year as the headline name in the 2017 Hall of Fame class. He has wrestled a few times since then, but this would be his WrestleMania return. I’m happy for Kurt.

Who will win at WrestleMania? Rousey and Angle, of course. Since it’s a mixed tag team match, that means it’s men vs. men and women vs. women. The majority of the match will likely be Angle and Triple H wrestling while building up to the moment where Rousey gets the tag and makes Stephanie tap in an armbar. I don’t expect it to be a great match, due to Stephanie’s inexperience in the ring, but they should be able to get through it since they will have another month to prepare for it.

I’m looking forward to seeing how Rousey does against the women’s wrestlers on the current roster later this year. I think having Rousey beat Stephanie in her first match is fine because it’s going to make the fans like Rousey a lot since Stephanie is such a hated villain. As much as I am sick of the McMahons taking up TV time, Stephanie does know how to get the crowd to hate her.

It’s worth pointing out that there were rumors that it may be Rousey and The Rock teaming up based off what happened with those two against Triple H and Stephanie at WrestleMania 31 three years ago, but using Angle for this match is fine. The Rock hasn’t had a proper match since he lost to John Cena at WrestleMania 29 in 2013. There was an impromptu match against Erick Rowan at WrestleMania 32 in 2016 that didn’t involve Rock taking a bump, but that was more of a comedy thing.

The issue with Rock is he was injured during his matches with Cena earlier in the decade, so it might hurt the production of movies he takes part in. That has led to insurance issues because production companies don’t want him wrestling. If he gets hurt, it might delay filming. If I had to guess, I doubt The Rock ever wrestles again — but never say never.

Rousey commented on the segment on Twitter and Instagram while thanking the fans in Milwaukee for the love.

Respect your olympians. Or we’ll make you respect us. See you at #WrestleMania34 pic.twitter.com/ujjVDVJw14

Thank you for all the love tonight Milwaukee ??❤️

As of this moment, three WrestleMania matches are official.

Intercontinental Championship: The Miz vs. Finn Balor vs. Seth Rollins

Some of the matches featuring Smackdown talent should be known later in the month, especially since Smackdown’s Fastlane pay-per-view is this Sunday. I’ll have a predictions article about Fastlane up later in the week.