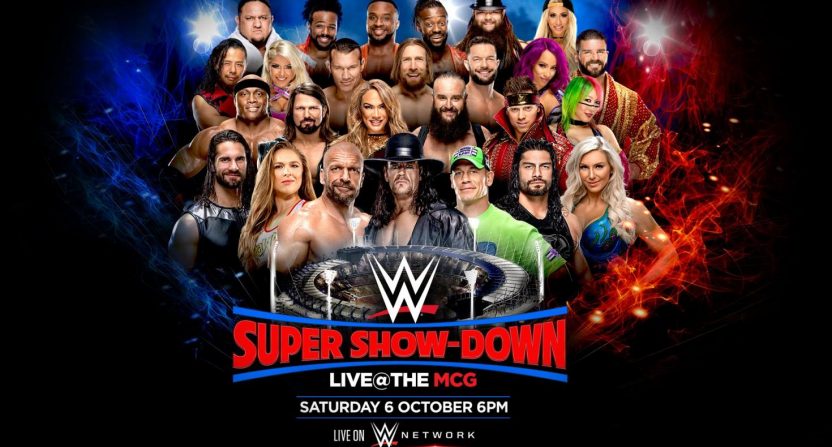 It’s no secret that WWE is looking to expand worldwide and they did that with the Greatest Royal Rumble in Saudi Arabia as part of a 10-year agreement to hold annual events in Jeddah. Coming off the heels of that event, WWE announced another big international event, this time in Australia.

On Saturday, October 6, the “WWE Super Show-Down” will take place at the Melbourne Cricket Ground in Melbourne, Australia. With an over 100k seating capacity, filling the stadium will be a tall order but it should no doubt break the current attendance record for a wrestling event in Australia of 56,743.

The event is less than four months away so obviously WWE wouldn’t reveal the entire card. One match they did mention was that The Undertaker would face Triple H. It’s a nice match to announce that won’t affect current storylines and is filled with nostalgia that’s guaranteed to sell tickets. Let’s face it, it’s likely the last time The Undertaker will be competing in Australia so take advantage of it.

There doesn’t seem to be any sort of “Royal Rumble” or other special match but there will probably be some gimmick matches to spice up the card. While WWE didn’t reveal anymore matches, they did reveal some who are expected to attend which, as always, is subject to change.

One intriguing name is Shawn Michaels. Michaels hasn’t had a match since retiring at WrestleMania XXVI in 2010 so I’m guessing he won’t be returning to the ring. Maybe he’ll be a special guest referee for the Triple H/Undertaker match like they did at WrestleMania XXVIII. Either way, it’ll be nice to see The Heartbreak Kid back in some capacity.

Another positive part of this event is that female wrestlers will be competing, unlike in Saudi Arabia. In fact, given Billie Kay and Peyton Royce are Australian, they are probably going to factor in this event in a big way.

It’s unknown what time the event will take place but given Australia is 14 hours ahead of the Eastern time zone, it’s not going to be an ideal time for those of us in the United States. If it starts at 7:00 pm Melbourne time, it’ll start at 5 am on the east coast. Conversely, if it’s a 1 pm afternoon show in Melbourne, it’ll be a little better starting at 8 pm on the west coast. Ah well, Australian and Asian fans have to get up at wild hours to watch WWE in the U.S., it’s not going to be that bad if it happens to us once in a while.