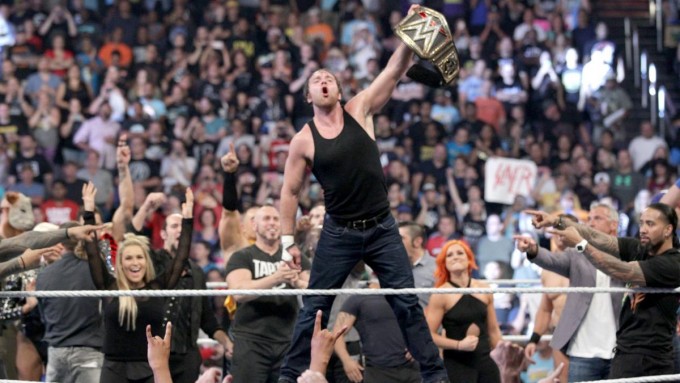 The WWE Title was on the line at Battleground as Dean Ambrose pinned recently suspended superstar Roman Reigns in a match that also involved Seth Rollins. In another interesting development on the show, the returning Randy Orton took a verbal shot at Brock Lesnar to make their upcoming SummerSlam match more personal.

For the second straight PPV event, WWE decided to end the show 17 minutes past the 11 p.m. ET hour. It shows that the company doesn’t really care when the show ends because it’s on WWE Network, so they can end it the way they want. The bad thing is that we are used to three-hour (or four-hour) shows and when it goes longer, it just feels too long. The good thing about it is that you never know when the show might end, whereas in the past we always knew it had to be done by 11 p.m. ET.

Here’s a rundown of everything that happened in the order which it took place.

This was the Kickoff Match featuring two teams on the Smackdown brand that had no hype. I’m glad that Breezango won because they’re a heel team with a lot of potential. Remember last month when they had a bad comedy match against Golden Truth where they lost because they were in the tanning bed too long? That was stupid. This was a more serious match that they won. It’s important for Smackdown’s future to build up a team like Breezango.

What a reaction for Bayley! Wow. It shows that WWE can definitely create marketable stars in NXT. It’s pretty rare to see a women’s tag match open a PPV event, but they made the right choice with this match because the crowd was into it from the beginning. They had a really good tag match that went about 10 minutes.

Banks won for her team when she locked Women’s Champion Charlotte in the Bank Statement and Charlotte tapped out. It sets up the obvious SummerSlam match between them that will likely lead to Banks ending Charlotte’s nearly year-long reign as Divas/Women’s Champion.

As for Bayley, they had John Bradshaw Layfield mention on commentary that his “sources” said it was just a one-time thing. Then she did this post-match interview (see video above) talking about how it was a one-time thing because she’s focused on the Women’s Title in NXT. She’ll challenge Asuka for that title at NXT Takeover Brooklyn on Aug. 20, one night before SummerSlam.

I expect Bayley to lose that match and then she should be on the main roster right after SummerSlam, but that’s not confirmed at this time. It still doesn’t explain why she wasn’t drafted last week, although that’s really a company-wide problem where they did a poor job of setting up the WWE Draft rules.

It was an interesting booking decision to have The Wyatt Family win, since they are being split up (Wyatt & Rowan to Smackdown while Strowman is on Raw) while The New Day remain together as the Tag Team Champions on Raw. Going into it, I picked The Wyatt Family to win because I thought they needed to put Bray Wyatt over somebody clean because he’s a featured guy on Smackdown.

I was impressed by Xavier Woods in the match. He did a great job of acting afraid of Wyatt early on, then he found the spirit to fight back, taking it to him in a believable way. The crowd rallied behind him. Then Wyatt did his freaky crab walk thing, Woods was stunned and Wyatt hit Sister Abigail to win. Solid match that probably won’t hurt New Day too much at all.

This was one of the more predictable matches of the night. Ryder showed some good babyface heart towards the end of it, but then he missed a top rope elbow because Rusev put up his knees to block it. Then Rusev finished him off with his Accolade submission to keep the gold.

I can't believe fan jumped in the ring and nobody stopped him ! I need a challenge it's just too easy. #WWEBattleground

After the win, Rusev looked like he wanted to attack Ryder some more. Then Mojo Rawley made the save. If you don’t know much about him, he was drafted to Smackdown and is the tag partner of Ryder as the “Hype Bros.” Rawley got in Rusev’s face, but Rusev just walked away. On Twitter, Rusev referred to Rawley as a “fan” to insult the former NXT performer who wasn’t much of a big name there. Rusev’s awesome on Twitter.

It was one of the best matches of the year. I know some people may be sick of them having matches because they’ve had so many of them this year, but I’ll never get sick of it. Their ability to find ways to come up with creative spots every time they have a match is what makes me want to see them fight forever. The crowd wants it too because they gave them a standing ovation during the match, which is very rare.

I loved some of the spots they did like Zayn hitting a brainbuster on the ring apron because you don’t see other people do that. Great near-fall near the end with Owens hitting his Popup Powerbomb and Zayn getting his foot on the bottom rope. Then Zayn made his awesome comeback that included one Helluva Kick, holding Owens up and hitting another Helluva Kick to get the win.

There was a scary spot in the match where Zayn was going for a springboard moonsault onto Owens outside the ring. When he bounced off the top, he ended up taking the bump right on his right shoulder. There’s a part of me that thinks maybe it was a planned spot, but I’m leaning towards it being an accident because it’s not smart to plan a spot like that for a guy that missed half a year with shoulder surgery.

This was the biggest win of Zayn’s career. It was actually his first win at a pay-per-view event as well. I think they see a lot of potential in him as a top face and with Raw not having a lot big names on the face side right now. I’m not sure what his next feud will be, but perhaps matching him with Rusev would be good for both of them.

They were in a difficult spot following that amazing Zayn/Owens match. I liked what they did, though. Natalya did well as the aggressive heel that worked on the left knee of Lynch for much of it. Lynch sold the knee better than most people in WWE sell body parts when they are worked on. The finish saw Natalya kick her in the kneecap while Lynch was being pulled back by the ref, and then Natalya made her tap out to the Sharpshooter.

The only thing I think they could have changed would have been more cheating by Natalya for the finish. Heels winning in a cheap way should happen more often because it makes the fans want to see the match again. They’ll probably have other matches in the near future with Lynch getting some big wins along the way.

The Miz vs. Darren Young ended in a double disqualification

This was the worst match of the night with a terrible finish. The crowd was dead for it with Miz on offense early and Young trying to get the audience into it, but they didn’t care. The only thing that really drew a reaction was when Maryse (Miz’s wife) slapped Bob Backlund (Young’s life coach). Then it led to Miz going after Backlund, so Young attacked Miz on the floor with the Crossface Chickenwing, which I don’t think he applied properly. The referee rang the bell for some reason.

There was no official match result announced. At first, I thought it was a double countout because a disqualification didn’t make sense. Then I checked on WWE.com and they called it a double disqualification, so that’s what we’ll go with. With Miz on Smackdown and Young on Raw, I guess it’s the end of this rivalry. That’s probably for the best.

Before discussing the match, it’s important to put over how awesome Enzo Amore’s promo was before the action started. I love how WWE is confident in him to give him a few minutes to just ramble on about silly things that may make no sense on paper, but when he says it, he finds a way to make it work. The life advice bit was hilarious. I laughed a lot when announcer Byron Saxton asked JBL if he was taking notes and JBL matter of factly said: “Shut up, Byron.” Great stuff. Cena was so impressed by Enzo’s promo that he raised his arm as if he won a match.

As for the match, it was pretty good. It felt like a Raw match and also a bit a repetitive because of the six-man tag earlier in the night. It was weird how they set up the finish because Cena and Styles were the legal men that were both outside the ring for at least one minute or two. Meanwhile in the ring, we saw Big Cass try to go after Gallows & Anderson and then Enzo failed when he tried as well. It’s a regular tag match, so why is the referee allowing those guys in the ring while ignoring the two legal guys?

The finish was predictable with Cena winning, but I didn’t expect him to pin Styles. He got the win with an Attitude Adjustment off the middle ropes. Why not pin Gallows or Anderson? That surprised me a bit. I guess they did it that way because Cena’s probably facing Styles again at SummerSlam. Now that he can say he beat Styles, it sets up the match easier. I’ll miss Gallows and Anderson with Styles because they got drafted to Raw while AJ is on Smackdown. It sucks when a good group gets broken up like that.