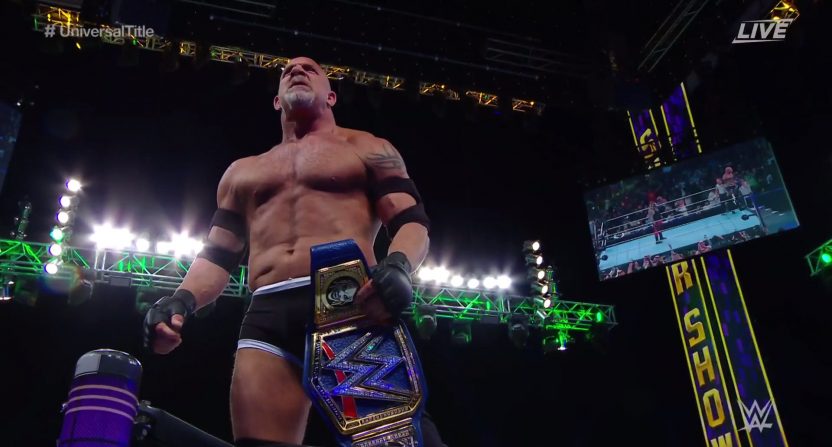 WWE had its fifth Saudi Arabia pay-per-view and Super ShowDown was…something else.

The event was all about nostalgia as The Undertaker, Brock Lesnar, and Goldberg won the three biggest matches on the card with relative ease. Reaction was mostly negative if you check out Twitter and most of that was due to the finish but we’ll get there.

Super ShowDown started with the gauntlet match for the “prestigious” Tuwaiq Trophy. WWE made sure to push the “prestigious” moniker even though this is the first match. Other than R-Truth making a run and surviving all the way until AJ Styles beat him. And then after his O.C. partners beat up Rey Mysterio, The Undertaker showed up and took Mysterio’s place. The Undertaker is still special and his entrance is kick ass, and I can look past that it’s to set up a likely WrestleMania match but Taker defeated AJ Styles doing just one tombstone piledriver and not needing to take his hat and jacket off. The Undertaker cared so much about the “prestigious” Tuwaiq Trophy that he all but ignored the thing.

When you get drunk & buy something you think looks really cool.

But then you sober up & wonder what the hell you were thinking.#WWESSD pic.twitter.com/l2do9mb142

Next was the WWE Championship match between Brock Lesnar and Ricochet. WWE tried their best to make Ricochet a formidable opponent but after WWE had Drew McIntyre eliminate Lesnar at the Royal Rumble and set up the WrestleMania match, no one thought Ricochet was going to win. I’ll give Lesnar credit, he’s been on TV more often and he’s been in some more competitive matches, but Lesnar’s still a part-timer who doesn’t do that much and get paid a lot of money. And in this instance, Lesnar won in 90 seconds.

Before the main event, Roman Reigns won a steel cage match against “King” Corbin in a rivalry that was dull at least a month ago and never seems to end. And then Bayley defended her SmackDown Women’s Championship against Naomi as Saudi Arabia gradually allows women to compete in their events.

So yeah, the main event. “The Fiend” Bray Wyatt has been an unstoppable force for over six months. He has gone through opponents left and right and fans have been all about Bray and his “Firefly Funhouse.” And then 53-year-old Goldberg came to town and beat The Fiend in 90 seconds to become the Universal Champion.

The prevailing plan was to have The Fiend lose to Roman Reigns at WrestleMania 36 and while some fans may not like that, it at least made sense. Reigns is still a star and he’s been cooled off over the past couple years as he underwent treatment and was in remission for leukemia. Even though Roman isn’t my personal cup of tea, he deserves to win the title.

Instead, we got Goldberg, who last year split his head open and almost legit paralyzed The Undertaker, using the only two moves he confidentially knows for the past 20+ years to defeat the top full-time wrestler WWE has had right now. If you’re a WWE or pro wrestling fan, it’s best not to think about it that much. It’s just way too depressing otherwise.

On top of the subpar wrestling, WWE’s Saudi Arabia PPV’s are controversial in a variety of ways. Due to the political components of working with a country known to assassinate journalists and keeping wrestlers from leaving the country, many have decided to not go. Not to mention, until last year, women weren’t allowed to compete but that seems to slowly be going away. Nevertheless, because WWE gets paid lots of money, they’re going to have these events no matter the quality. And until they’re unable to physically walk, people like Goldberg and The Undertaker will still be out there getting a big payday.