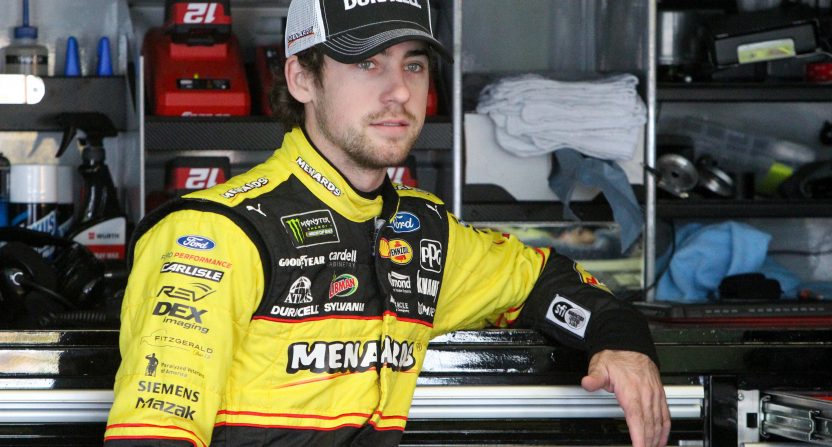 Ryan Blaney came to Pocono this time last year looking for his first Monster Energy NASCAR Cup Series win. A first career win for Blaney wasn’t only an awesome moment for the young driver, but would’ve gotten him into the NASCAR Playoffs. Blaney and the Wood Brothers always had the speed on long tracks like Pocono, but never could quite put it all together to get in Victory Lane.

In the end, the team worked on the car all day and Blaney found himself toward the front with a little more than 10 laps to go in the 400 mile race. In a masterful drive, Blaney muscled around Kyle Busch with nine laps to go and held off Kevin Harvick to score a popular first win for himself and 99th career MENCS win for the Wood Brothers.

Was lucky enough to be in Ryan @Blaney's pit for the final laps. Everyone on @woodbrothers21 were focused and nervous on the last lap. pic.twitter.com/mqfUU8nVQz

Now, nearly a year removed from that big win, Ryan Blaney is back and looking to continue those winning vibes from last year. Pocono is a special place for Blaney and for team owner Roger Penske, and the track provided a nice throwback gift to the Team Penske driver.

Hey @Blaney.. we didn't forget. We have something in the media center for you! See you soon!

Blaney revealed in an interview with The Comeback that the old school Penske Racing jacket he received actually came from a fan who gave it to the speedway.

“[The track] gave me a super cool Penske Racing and Miller High Life jacket,” Blaney said. “I guess they said a fan just gave it to them and I actually messaged the track when they put it out there and it fits great. I’m excited. Hopefully it gets cold and maybe I’ll get to wear it on Sunday. [laughter]”

The first practice gave Blaney a bit of confidence over the rest of the field. In race trim, he was up toward the top and then when the teams switched over to qualifying trim, he ended up eighth.

“I thought we were okay [in Practice 1],” Blaney said. “It was a pretty short practice, we only did maybe five laps of race trim, then we switched over to qualifying trim kinda hustlin’ and trying to get everything done in time. A lot of things were happening fast but I think our car is okay. I thought we had some speed, there’s definitely a lot more speed out there but we learned a lot from the race run and a couple runs there in qualifying trim to hopefully adjust on it later today for qualifying and hopefully start toward the front. That’s a big deal here and we’ll see what we can do Sunday.”

Despite probably wanting to get some more laps, it’s a good start for a race weekend where the weather is likely to be unpredictable.

“The rest of today looks okay so we might get qualifying in. Tomorrow looks iffy, that’s why I wanted to get a race run in today in case it got rained out tomorrow. And then Sunday, it doesn’t look terrible but you never know up here. It can clear up or get really bad in a hurry.”

“It’ll be cold [on Sunday, high of 65 degrees]. Track pace will pick up a lot when the track cools down like that so that’ll be even more important to try to be towards the front. Cars will be handling a little bit better so yeah, [the temperature change] will be a big change from where we practiced today to Sunday.”

The weather conditions will make it more difficult for all teams but it’s something that everyone can adjust to. While some things may need to be tweaked between now and the green flag, a fast car off the hauler is always a good thing to have.

A repeat win at Pocono would be massive for Team Penske and Ryan Blaney. Not only because a win would get him into the NASCAR Playoffs but because of his deep personal connection between Pocono Raceway. Blaney shared that Pocono has had some added significance in terms of when he started his racing career and can only rise higher with a second career win at this track.

“I made my first ever start here in a quarter-midget outside the track in Turn 3,” Blaney said. “They have a little dirt track out there. And I watched my dad come up here a lot. My dad’s side of the family is from not too far from here so we come here a lot and have had a lot of memories at this place.”