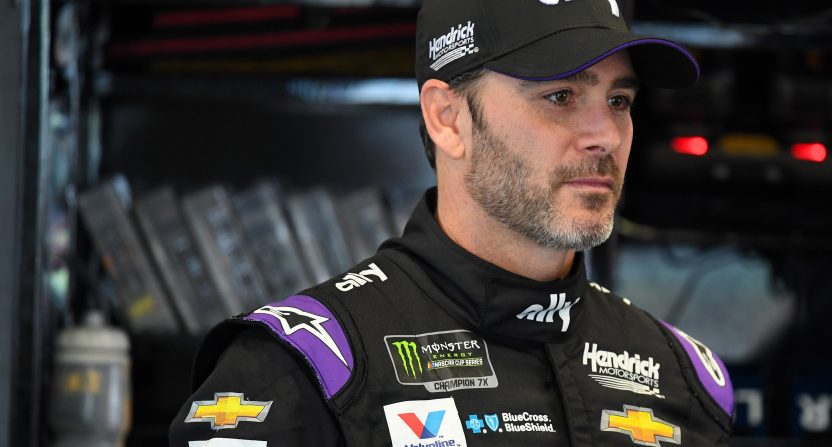 By all measurements, Jimmie Johnson had a bad 2018 NASCAR season. It was also a turning point for the seven-time champion. He had a winless season for the first time ever, and lost long-time crew chief Chad Knaus and sponsor Lowe’s. But with a new crew chief and a new sponsor, Johnson is back in 2019 ready to show everyone that he still has what it takes to win and compete for championships. And if the Advance Auto Parts Clash is any indication, Johnson may be right.

Even Johnson himself would admit that 2018 wasn’t good, especially by his standards. “Sadly, ’18 had quite a few low points,” Johnson said. “To not win a race was probably the lowest of them. Also, in a way, the decision to part ways with Chad, that wasn’t easy and it was something he and I hoped that day wouldn’t come, but it did and it wasn’t easy.”

Johnson’s 2018 season was defined with the news that he would split with Knaus after 2018. After 17 years, seven titles, and 81 wins together, one of the top driver/crew chief pairings in NASCAR history would be no more, as Knaus would work with William Byron and Johnson with Kevin Meendering starting in 2019. According to Johnson, he and team owner Rick Hendrick realized that things weren’t working, and while Knaus wasn’t aware of it at first, he agreed as well and felt it was best to have a change of scenery.

“It’s an evolution of things,” Johnson said. “I think anybody in the garage area can see and sense the tension and the difficulties we were having. From my standpoint, I was just in a place where, we don’t have to stay that course, we don’t have to be miserable. This isn’t working, it’s okay to change. That was my perspective, I think Rick was in a similar space. I think Chad ended up in a similar space. He was probably more caught off-guard with the concept than any of us but he gets it. We had a heck of a run and I think both of us have the opinion of let’s celebrate the 17 amazing seasons and last year was just a tough year.”

With that 2018 season behind him, Johnson took to the offseason and did the things he always wanted to do. One of those things was to drive a Formula 1 car, and with the help of Fernando Alonso and McLaren, Johnson and Alonso swapped rides in Bahrain to see what they could do in a car they don’t usually drive.

You can tell in the clip that Johnson had fun, and Johnson himself said it was the “experience of a lifetime.” Johnson marveled at the braking system where you can wait until the absolute last moment to hit the brakes. Johnson noted that due to the G’s from braking, it left him with temporary blurred vision and it took a second for his eyes to refocus. It was also unique the way F1 cars handled where the harder you drove the car, the better it handled, which is the complete opposite of how you drive a stock car (or any car).

“That’s the ultimate vehicle,” Johnson told The Comeback. “You grow up racing different things and you find new grip levels and cars and for me, from the dirt to the asphalt, you come up through the ranks and you get more and more power and more and more downforce and you’re going faster. And I’ve been in these Cup cars for a long time now and have been able to experience that thing. And then to jump over many steps of Formula driving and downforce and light vehicles to the ultimate vehicle and experience that was just epic.”

Johnson followed two other NASCAR stars who did a NASCAR/F1 crossover event (Jeff Gordon/Juan Pablo Montoya at Indianapolis and Tony Stewart/Lewis Hamilton at Watkins Glen). Johnson got solid advice from Gordon, who told him to work on his neck muscles. With the massive acceleration and braking F1 cars go through, the g-forces that occur require a strong neck.

While this crossover event had practical benefits in terms of increasing fan awareness of NASCAR to the rest of the world and Formula 1 to America, Johnson also hopes this is the start of him taking part in other forms of motorsports as he looks toward a future that may not contain as much NASCAR racing, possibly as early as 2021.

“There’s no doubt that the crossover effect is good for all of us,” Johnson said. “In motorsports, I think we’ve ended up with a really high focus on championships and when I look back to the Andretti era and Jones and Dan Gurney and on and on a lot of those guys would run the marquee events and it wasn’t so championship focused. And I get the importance of a championship, and clearly it’s made my life dream of winning seven as a big part of that. But as I look down the road, I don’t feel like I’m in a place anymore where I have to just stay focused on one thing. And in 2021 and beyond, I’m kicking around the idea of being more open to racing anything and everything and having that fun experience. And going as well as I did in that Formula 1 car was the confidence I needed to really pursue that for 2021 and beyond.”

“I ran those sports cars for a bunch of years trying to let the world know that “Hey, I am interested in other types of cars and other types of driving.” So, hopefully people still remember that because sports cars are also something I’m highly interested in. Love to race Le Mans, love to go back to the Rolex 24. So again, I’m just open and the open wheel cockpit experience was really cool. And I feel like road course racing in an IndyCar is something that I can talk my wife into letting me do [laughter].”

Along with a new crew chief, Johnson enters 2019 with a new sponsor in Ally Financial, and in a time where sponsors appear to be leaving the sport or cutting down the number of races, Johnson is appreciative and hopeful for the future of the sport that a company like Ally is willing to take part as a multi-year primary sponsor.

“They’re fantastic people, ton of energy,” Johnson said. “They have a brand they want the world to know about and they want to use NASCAR for that. And in a world where sponsors, primary sponsors are two to three to a car. People are pulling back activation, we have Ally coming in ready to push activation. A primary sponsor for two years on the car. They really see the value in Hendrick Motorsports, in Jimmie Johnson and in NASCAR. And it’s awesome to see that in today’s world. And hopefully their excitement will rub off on some other corporations and we can get the sponsorship back to where it once was.”

Johnson noted that Ally has a two-year deal with the #48 Chevrolet. Along with his contract being up in 2020, it would be natural to believe that the 2020 season could possibly be Johnson’s last full-time season in NASCAR. Johnson himself has said it would be “presumptuous” to think the end of this current contract is it for him, he said it himself that at this point, he’s “more open to racing anything and everything.” It’s realistic to at least imagine a possibility that Jimmie Johnson will be racing something else starting in 2021.

But that’s in a couple years, and Johnson isn’t anywhere close to being done with NASCAR. With a disappointing 2018 season behind him, Johnson is now onto 2019 with a fresh start and he is already making the most of it.

That was the case in the first race of the season, at the Advance Auto Parts Clash. With the threat of rain, the second place Johnson made his move. No one will ever say it was the cleanest move, as it happens so often with restrictor plate racing, Johnson got too close to leader Paul Menard and the entire field almost wrecked behind him. And right as the wreck happened, it rained too hard and Johnson won the exhibition race.

It may not have been the way Jimmie Johnson was expecting or wanting to win a race, but he still won the Clash and that’s what ultimately matters. It’s way too early to tell if he’ll be part of the Championship Four at Homestead, but after a great start to the 2019 season, Johnson is certainly going to be in the hunt for win number 84 and tie Darrell Waltrip and Bobby Allison for most Cup wins. After that, the options seem limitless for the seven-time champ.