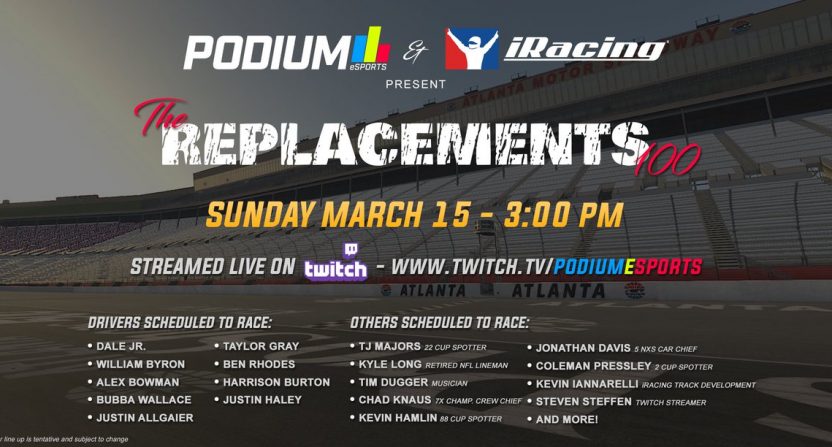 With the sports world grinding to a halt, everyone in the industry needs to be creative to provide action and entertainment to their fans. In auto racing, professional racers practice by going online. You don’t get the physical danger of the real thing but it’s a realistic simulation applicable to on-track skills, which is something you can’t really say about other sports.

Now that about every racing series in the world is postponed due to the coronavirus, racers still have the urge to race and are going to do that online. This week alone, at least four races will take place between pro racers and some of the top eSports racers to fuel our sports juices.

Going in order of when these races will be run, the festivities will start at 8:50 AM ET Sunday with an all-star race on the Albert Park circuit with the help of the game rFactor 2. Formula 1 was supposed to have the Australian Grand Prix this weekend but instead, a wide rage of pro drivers including Red Bull F1’s Max Verstappen, former Monaco GP and Indy 500 winner Juan Pablo Montoya, and defending Indy 500 champ Simon Pagenaud will be racing.

Introducing “Not the AUS GP”, an online event with REAL F1 Pros vs Top Gamers. 🏎️

The NASCAR community has also come together to provide great racing to fans. At 3:00 PM ET on Twitch, a who’s who of racers including Dale Earnhardt Jr., William Byron, Alex Bowman, and Bubba Wallace, along with NASCAR people like champion crew chief Chad Knaus will be on iRacing, tackling the virtual Atlanta Motor Speedway, which was where NASCAR was supposed to be racing this weekend.

The stars will be out on track tomorrow afternoon as we take you to @amsupdates for The Replacements 100 on @iRacing . Coverage starts at 3pm ET, with Green Flag at 3:30pm ET. You can watch the whole race LIVE at https://t.co/fSQZL9KiaG#Replacements100 pic.twitter.com/iWdj3o09j3

Last but not least, a massive race is set to take place sometime Thursday night. NASCAR driver Ryan Vargas really got a lot of this kicked off and the list is already full of iRacers and pro drivers Details will be revealed soon about what the race will be and where you can check it out but it sounds like it’ll be an incredible experience.

This is going to be big folks.

Been amazed by how this community has come together to make an event like this happen!

Stay tuned for official updates on the iRacing race that we will be putting on Thursday Night. You won’t wanna miss this show. pic.twitter.com/5DJE2cwoqQ

All of this is a great way for people to come together and provide an escape through sports in a safe way. While we all want to have sports as an escape, circumstances prevent that from happening sometimes. But this is the best of both worlds. Not only does this have a chance to open up motorsports to new fans, it may open up eSports to people who may not be aware or may have negative views of the concept.

Most of these races (assuming more will take place in the future) will be online but I hope we get to a point where a broadcaster gets the rights and shows a race on TV. Younger people might be more inclined to watch on Twitch or YouTube but given there’s no other sports taking place, why not have a network like FS1 or NBCSN carve a couple hours one night and show this to grow a whole new audience. It’s live and it looks just like the real thing, this is a chance to open up the concept of eSports to a potentially older audience who might tune in since it’s an alternative to nothing. This could be a potential win-win for everybody.