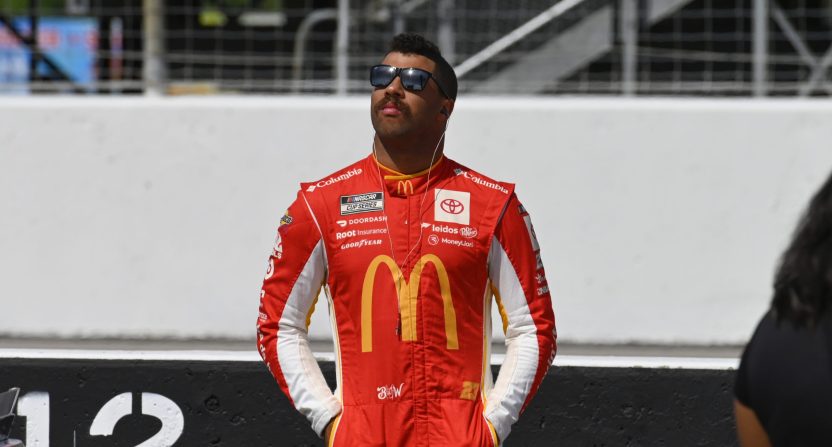 NASCAR Cup Series competitor Bubba Wallace is one of the most polarizing racers in the sport, and he made career history on Saturday that will set him up in prime position to potentially win the FireKeepers Casino 400 at Michigan International Speedway on Sunday.

Wallace was able to take home his first career Busch Light Pole Award on Saturday, qualifying with the fastest lap on Saturday which will result in Wallace starting in first for the race on Sunday.

On top of securing his first-place starting position on Sunday, Wallace also broke the record for the fastest qualifying lap of 2022 with an average lap speed of 190.703 mph.

Many around the racing world have noticed this impressive performance from Wallace, and taken to social media to express their congratulations and support for Sunday’s race.

Pole for @BubbaWallace at @MISpeedway!! Congrats bro! @McDonalds should give everyone Happy Meals to celebrate

Been telling people for weeks to watch for this team this weekend. https://t.co/gftu7UsL2z

Wallace posted a video on social media following the pole victory where he certainly seemed to be excited about his chances to potentially win on Sunday.

“Let’s go, first time pole sitter here,” said Wallace. “So excited, super pumped, so proud of my team. The McDonald’s Toyota Camry is super fast. This test that we had a couple of months ago definitely proved that, and now we are showing to come and get the big trophy when it matters. Thanks to everybody, thanks to the fans, this is all for you guys and let’s go get it tomorrow.”

There is still plenty of work for Wallace to put it on Sunday for this pole position to matter, but it is definitely an extremely promising day for Bubba as he tries to win his first race since winning at Talladega Superspeedway in 2021.