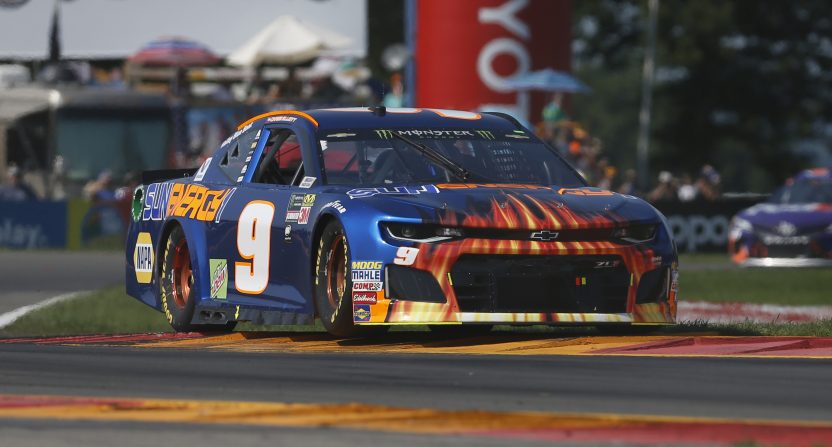 The pressure of a first career win is something that can eat people alive and for 98 career races, Chase Elliott experienced so many finishes where he came so close to winning that you wouldn’t blame him if he never thought he would win. But in his 99th career Monster Energy NASCAR Cup Series race, Chase Elliott survived a potential disaster on pit road and a near-colossal mistake on the final lap to get that much eluded win at Watkins Glen.

Elliott was up front all day, fighting early with Joe Gibbs Racing drivers Kyle Busch and Denny Hamlin. After Hamlin was dispatched, it seemed like it would be a heads-up duel with Busch for the rest of the way. But in the final pitstop, Busch’s crew had a malfunction and were unable to get fuel in the car, necessitating another stop and being forced to start from the back of the pack. Busch was able to claw and scratch his way through the field and finish third but definitely needed a caution to catch up to the leaders.

Instead of Busch, Martin Truex Jr. became the guy who challenged Elliott for the win. Truex was going for three road course wins in a row and for him, it was all about wins and points so he would surely leave nothing on the table and make Elliott earn it.

As the laps ticked down, the pressure built. And then when they took the white flag, the bottom fell out and every Chase Elliott fan had an all-too familiar empty feeling. Elliott wheel hopped the car entering Turn 1 and was forced to go wide, allowing Truex to get right to him.

HIS FIRST CAREER WIN! @ChaseElliott finally gets it at @WGI, holding off Martin Truex Jr. in an absolutely thrilling final lap! pic.twitter.com/RVqLrS6GdF

But while things appeared dire, it appeared the racing gods were just testing Elliott. And when he passed that test, they ran Truex out of fuel with a couple turns left, giving Elliott the victory.

With Elliott was his father, NASCAR Hall of Famer Bill, who was spotting for Chase in the bus stop. Bill doesn’t usually spot for his son but given the shape of the track, teams usually have multiple spotters for Watkins Glen. Like father, like son, Bill had eight runner-up finishes before he got his first win in 1983. And just like Chase, Bill got his first win on a road course, at the old Riverside International Raceway. One thing Chase has over his father, Chase won in his 99th start while it took Bill 116 starts. And while we’re talking about Bill Elliott, the 62-year-old legend will be back for one more race at the Road America Xfinity race later this month.

And at the Dawsonville Pool Hall, where they would blare the siren when Bill won, did the same for Chase today.

Congrats @chaseelliott Everyone in Dawsonville is happy for you. #nascar @TeamHendrick pic.twitter.com/3wZzQCwAgw

Getting a push from a seven-time champ.

What do you think of @chaseelliott's first career win? Share your thoughts using #VictoryLap as post-race coverage continues in a few moments on @NBCSN. pic.twitter.com/hhkGukVV3F

We knew Chase Elliott would eventually win, we just didn’t know when. Chase Elliott was inching toward 100 career races and while many figured the planets would align at some point, the whispers about being “overrated” were slowly getting louder. After today, those people can shut up and now that he finally has his first win, the pressure of getting his first career win will forever be off of Chase Elliott.