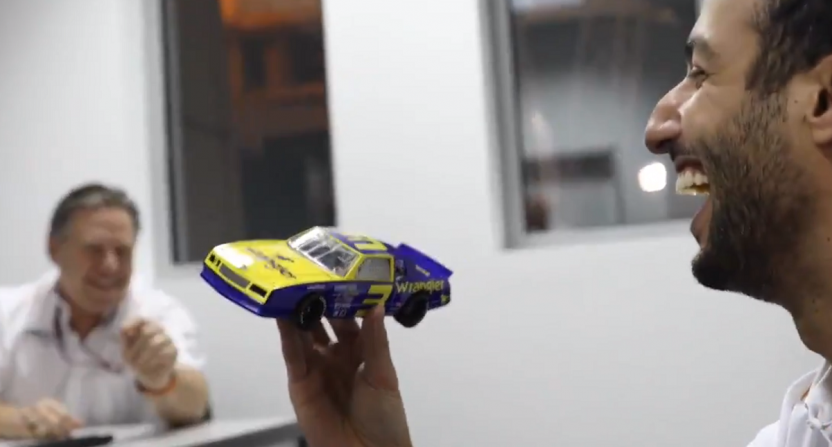 The Formula 1 season kicked off this past weekend in Bahrain, and while the next race weekend isn’t until mid-April, we’re still getting content.

Not just in the form of Netflix’s excellent Drive to Survive documentary, either. Rather, we got some rare cross-motorsport content. NASCAR and Formula 1 certainly have some overlapping fans, though there are also plenty of vocal members in the outer two circles of that particular Venn diagram. There’s one F1 driver who has never made his love of NASCAR a secret, though: Daniel Ricciardo, who uses the #3 in honor of the Dale Earnhardt Sr.

Ricciardo drove for Renault the last two years, and his standing bet with Renault team manager Cyril Abiteboul that should Ricciardo bring home a podium finish Cyril would have to get a tattoo became a weirdly big talking point during the season last year. It was arguably overplayed, to be honest, but even if it was driven into the ground by the media, it was still something people followed.

We know how much you enjoy a podium bet, @danielricciardo.

How does a drive of one of THE most iconic cars in @ZBrownCEO’s heritage collection sound? 🤩🇺🇸 pic.twitter.com/yj17DLiEjM

Brown owns a fleet of old race cars, including the one in question:

Get us that podium and the drive is all yours, @DanielRicciardo. 😉🔑 @DaleJr @NASCAR pic.twitter.com/wyplavg8G3

The wager received the stamp of approval from a very relevant figure:

Earnhardt Jr. and Ricciardo have had a bit of an online friendship for years, ever since Dale Jr. learned why Ricciardo chose to use the #3.

.@danielricciardo has an open invite to drive a @JRMotorsports car on a road course at any time. https://t.co/zByutSExjY

Hey @DaleJr look what we found in Belgium on the weekend!! #fansworldwide pic.twitter.com/CeJZeGBhZg

So awesome to have met this legend in the making. Congrats @danielricciardo!! https://t.co/dAzOmSVKhf

Hopefully Ricciardo brings home that podium finish this year so we can see him behind the wheel of a stock car. He has a good shot; McLaren finished third in the constructor’s race last season, and they looked very quick at the opening weekend, with Ricciardo finishing 7th and teammate Lando Norris taking 4th.

Should Ricciardo get the chance, hopefully there’s some way we can get Dale Jr. there at the same time to also take a few laps, if he wants to.