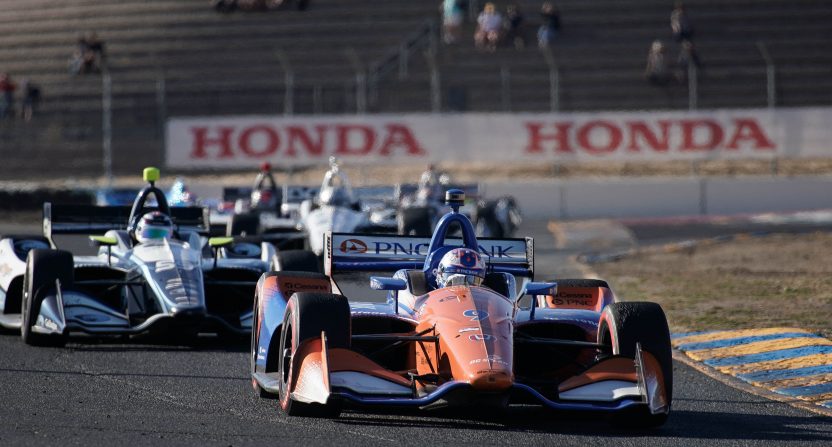 This weekend, the NTT IndyCar Series will head to St. Petersburg, FL to begin a new season. A new TV deal, a new title sponsor, and a couple new races highlight some of the changes IndyCar is facing this year. Phoenix and Sonoma are out, and the Circuit of the Americas and Laguna Seca are in, along with the other 15 races that had been on the schedule last season.

With a rising number of full-time entries and an Indy 500 entry list that already exceeds the 33-car field, this is going to be one of the strongest IndyCar fields since before the open wheel split. These are some other storylines that will have a big part in the 2019 NTT IndyCar Series:

NBC and IndyCar get exclusive

After splitting the IndyCar schedule with ABC/ESPN since 2009, 2019 begins NBC’s tenure with exclusive coverage of the NTT IndyCar Series, including the 103rd Indianapolis 500. NBC is set to air eight races while NBCSN will air nine, and they haven’t spared a moment in promoting the sport.

Mike Tirico will be in Indianapolis to host this year’s Indy 500 and NBC aired an ad for the race during an NFL playoff game. The network has been cross-promoting the new season during other broadcasts like the NHL and American Ninja Warrior.

It’s the kind of promotion that hasn’t been seen in a while and was certainly not seen when IndyCar was on ESPN. Will that result in higher viewership? It certainly doesn’t hurt.

Robert Wickens continues to inspire everyone. After surviving a horrible crash where a lesser person would have been killed, Wickens emerged alive but suffered a thoracic spinal fracture, among other injuries, that left him paralyzed. Even so, Wickens hasn’t let that stop him from working toward walking again and possibly getting back in the car.

Yesterday was 6 months since my accident. I’ve known I could do this for a week or so, but I wanted to surprise @itsKarliWoods ! One of my goals through this recovery is to dance at our wedding in September. This was a massive confidence boost that my goal could become a reality. pic.twitter.com/uLljFZ37XP

Wickens and his fiancée have been sending periodic updates on his improving health and inspiring anyone following this story. Wickens is slowly regaining the feeling in his legs and has been taking small steps with assistance. Wickens will be in St. Petersburg for the season opener to meet with fans and his fellow drivers, in his first track appearance just seven months after his crash. While he still has a while to go in his recovery, Arrow Schmidt Peterson Motorsports announced that they will have a car available for Wickens whenever he’s ready to return.

Fernando Alonso is back

After being away for a year, Fernando Alonso is back for the Indy 500. After leading for 27 laps and then blowing up with 21 laps to go in 2017, Alonso went back to Formula 1 and competed in the World Endurance Championship. After winning the 24 Hours of Le Mans in 2018, Alonso announced he will come back to Indianapolis in his first attempt to complete the Triple Crown of Motorsport.

There’s no telling what Alonso will do in 2020. He’s currently driving for Toyota in the WEC and McLaren wasn’t about to do the full IndyCar season. But in 2020? You never know.

Before the open wheel split, IndyCar (CART) racing was a world-renowned racing series that was as popular as NASCAR. CART was stacked with top drivers, well-funded teams, and had a healthy mix of ovals and road courses that took them around the world.

After the split, the racing remained great, but interest waned for a variety of reasons, and the big names of open wheel were no longer competing against each other. With a divided group, young talented open wheel drivers of the time went to NASCAR because while IndyCar was sinking, NASCAR became more and more popular and became the top racing series in the United States.

Now, the NTT IndyCar Series is steadily improving and at the point where they can entertain races around the world. Its viewership and popularity may not be on NASCAR’s level, but the gap closes more and more as time goes on. Rumors of races going back to Australia and Japan have surfaced, as well as a race in Argentina or Uruguay. Of course, there are races in Canada, but they have always been a part of the series with the United States. Heading to a variety of locales all around the world will not only bring a stronger fanbase internationally, but a stronger series overall.

It seems like it’s said every year, but a lot of drivers can win the NTT IndyCar Series championship. Defending champ Scott Dixon is going for his sixth title, but you also have the three Team Penske drivers in Josef Newgarden, Will Power, and Simon Pagenaud, as well as Andretti Autosport drivers Alexander Rossi and Ryan Hunter-Reay as serious contenders.

Past them, you still have a wide selection of drivers who may be longshots to win the title but can win on any given week. People like Sebastien Bourdais, Takuma Sato, Graham Rahal, James Hinchcliffe, and Marco Andretti have shown the ability that they can win. They’re just missing out on that thing to piece it all together race after race and go for a title run.