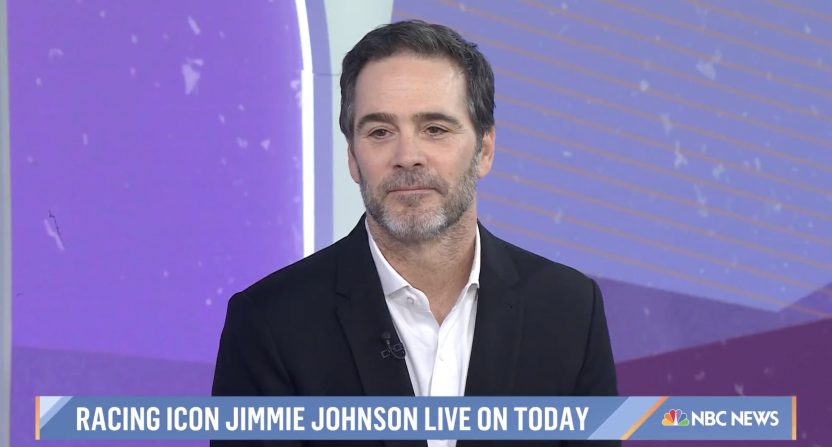 Jimmie Johnson was on The Today Show to make a major announcement. The seven-time NASCAR champ revealed on Wednesday that Petty GMS Motorsports is rebranding as “Legacy Motor Club” and Johnson’s car number will be #84 (48 flipped) when he races a partial Cup schedule in 2023.

Racing icon @JimmieJohnson is introducing Legacy Motor Club @PettyGMS, talking about the changes he has made this year, and more. pic.twitter.com/jrtHXSuiHC

The 47-year-old talked about the significance behind that name.

“As we sat and tried to put together the team name. Maury Gallagher founded the team, Richard Petty is involved, myself, we just couldn’t find the right acronym or the right way to kind of put the names together. And as we really thought about it, the legacy that Richard has created, the legacy Mr. Gallagher has created in racing and business, mine, just seemed like a great name and a great foundational point. And then at the same point and time, to have that nod to the past but to look forward and think about our young drivers, Noah Gragson and Erik Jones, and the legacy they want to create. Now I’m also a team owner, so I clearly have ambitions and want to create a new legacy as a team owner as well.”

While things have changed behind the scenes, this is the biggest visual shift in the Petty operation. While the name has changed multiple times over the years due to different owners being involved, it’s always had the name “Petty” somewhere on the team name. This is the first time a team involving the Petty family will not include the Petty name since Richard’s father Lee formed Petty Enterprises in 1949.

In 2022, the team had one of their most successful seasons in years, with Erik Jones winning the Southern 500. Technically, Petty GMS was a new team formed in 2022, but if you go back to the previous iterations of the Petty operation, this was the first win for the team since 2014 and the third win since 1997. The tw0-car operation will have Xfinity Series star Noah Gragson paired up with Jones as Johnson will race a “handful” of races in a third car.