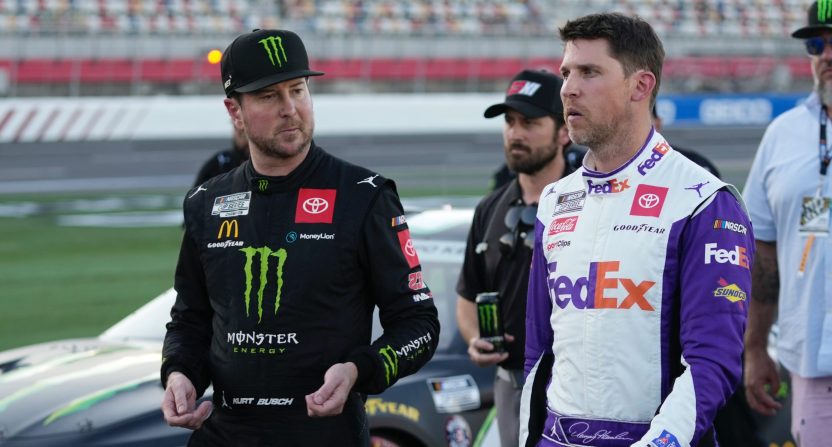 NASCAR team owner Joe Gibbs made a pretty big move on Monday as he tries to put his teams in the best position possible to compete in the Cup Series playoffs. Joe Gibbs Racing has decided to swap pit crews for the Kyle Busch and Denny Hamlin cars, starting this weekend at Texas Motor Speedway.

Hamlin is currently in sixth place in the Cup Series standings while Busch is in 14th place but has already been eliminated from the playoffs. Hamlin remains alive in the second round of the playoffs. Given that Busch’s crew has a slightly better average time on pit stops, it makes sense from a strategic perspective to try and give Hamlin the few extra seconds he might need to get close to the No. 1 spot in the standings.

Gibbs may have learned a lesson from earlier in the season when Christopher Bell and Bubba Wallace switched crews to refresh things. Bell had an average finish of 4.0 in the first round of the playoffs while Wallace won in Kansas.

It makes a lot of sense for JGR to make the move and the NASCAR world seems to agree.

No conspiracy, pretty black and white.. Denny's 2022 results, here on out, are more important than Kyle's

Personally, I get it and hope this benefits Denny. I'd love to see 4 non-Champions in the final race. Entertainment at it's peak and HISTORY BEING MADE 🤣 https://t.co/nBw0GM8S1u

Makes sense because Hamlin is fighting for the championship, but it’s going to be painful for Kyle https://t.co/AVKK7fEwpO

The No. 18 crew is currently ranked first in the Cup series according to @PitStopStats with an average pit stop time of 10.33 seconds.

Dumb People will see this as part or JGR conspiracy against Kyle but its not Kyle’s out of the playoffs denny is still in why not https://t.co/WXkCmbzIVm