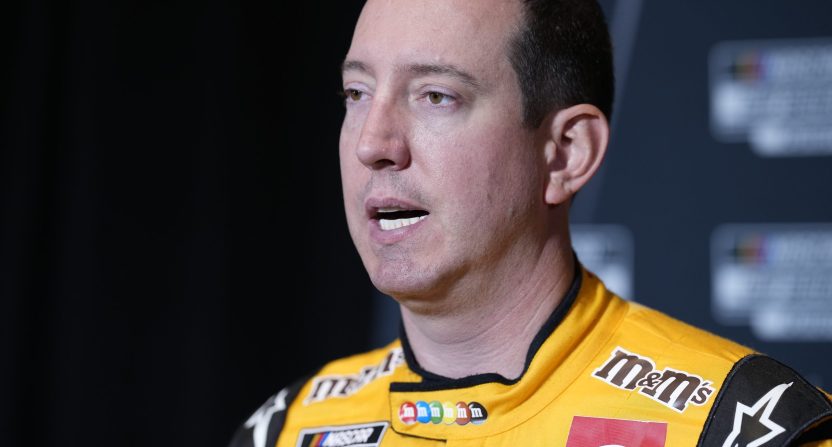 Last last week, news broke that NASCAR star driver Kyle Busch would be joining Richard Childress Racing next year, ending his 15-year affiliation with Joe Gibbs Racing. While the move has massive ramifications in the NASCAR world, Busch revealed on Tuesday that it could mean something big for the IndyCar circuit, as well.

In his introductory press conference after joining RCR, Busch revealed that under his new contract he can run the Indianapolis 500 for a Chevrolet-supported team, according to Jordan Bianchi of The Athletic. This would give him the option of competing in the famous race beginning in 2023.

Kyle Busch says he has it in his contract with RCR that he can run the Indy 500 for a Chevrolet-supported team.

“I can do it. Any Chevrolet IndyCar teams, call me up,” Busch said according to Matt Weaver of Racing America. He also revealed that his wife, Samantha Busch, is okay with him potentially racing in the Indianapolis 500 one day, saying “the only guy that said no was my former boss.”

If Kyle Busch does run the Indy 500, he would be following in the footsteps of his older brother, Kurt. Back in 2014, Kurt Busch ran the iconic race and performed quite well – finishing sixth of 33 cars in the field.

Naturally, the shocking news got the racing world stirring on Tuesday morning.

Predictably, Kyle Busch is taking zero prisoners on the way out of JGR, including a jab at Joe Gibbs for keeping him from running the #Indy500 in the future. #NASCAR #IndyCar https://t.co/EZfkAwMdZa

I just want too make sure everyone on Twitter is seeing the hell out of this https://t.co/tJHdCftGW2

Kyle Busch won’t be able to make the move until 2023. But this is a wild announcement nonetheless.