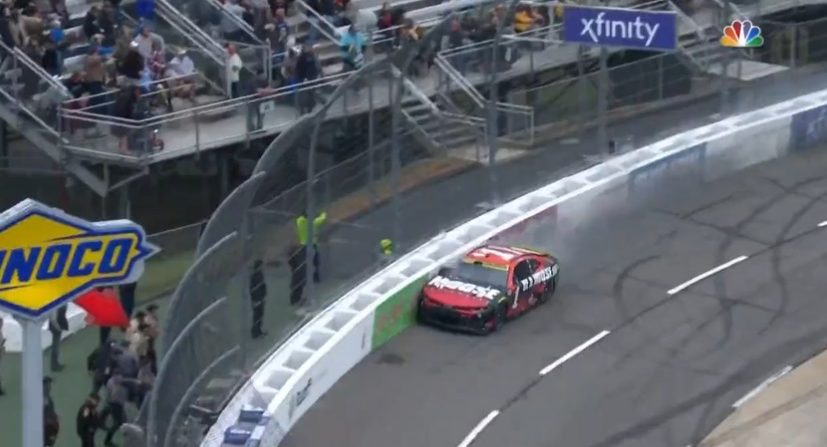 Sunday’s Xfinity 500 at Martinsville Speedway had some major implications for many competitors, but Ross Chastain stole the show with a wild move in the late stages of the race.

The results on Sunday’s race had huge implications on the 2022 championship picture, with the final four competitors for the championship being finalized at the end of the race.

In the final lap of the race, Chastain was outside of the final four playoff spots. He installed a risky strategy, riding the wall on turns three and four to gain enough points to pass Denny Hamlin, who was holding the final spot heading into the last lap.

It worked to perfection. He gained five spots with the move to clinch his position in the final four spots along with Joey Logano, Christopher Bell, and Chase Elliott.

Many reacted to this insane move from Chastain, praising him for the gutsy decision that paid off in a big way.

Ross Chastain hit the NOS button to make it to the championship over Denny @rubbinisracing pic.twitter.com/XyDBXyj5wD

The Ross Chastain move will go down in NASCAR history and be replayed forever. What should it be called?

My suggestion: The Hail Melon.

My God that was the sickest move I have ever seen. That is not an overstatement. Ross Chastain just did that.

Chastain discussed the maneuver following the conclusion of the race, hilariously saying that he learned the “video-game move” on NASCAR 2005 on the GameCube.

“I played a lot of NASCAR 2005 on the GameCube growing up, and you could get away with it,” said Chastain. “I never knew if it would actually work, I did that when I was eight years old.”

"Played a lot of NASCAR 2005 on the GameCube."@RossChastain explained his video-game move. #NASCAR pic.twitter.com/4jkF6BzAgk

It is ironic that Chastain did this move to supplant Hamlin considering Hamlin actually told him to do this move two years ago at an IRacing event at Martinsville.

Two years ago, Denny Hamlin gave some advice during our @iRacing event at Martinsville.

It worked in real life, but against him thanks to Ross Chastain. pic.twitter.com/8uWT7NaPN5

This moment will certainly be one of the memorable late-race maneuvers in recent memory, and kept Ross Chastain alive in his hunt for the 2022 NASCAR Cup Series Championship.