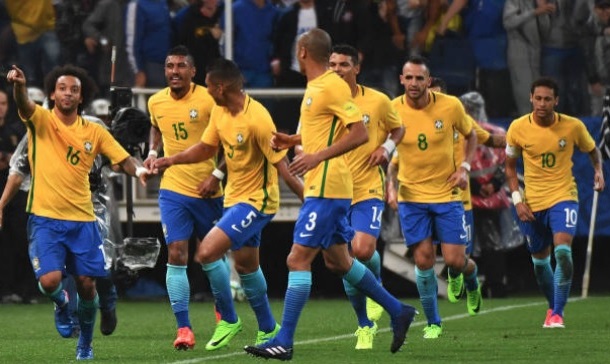 Now that we know the 32 teams that will compete in Russia at the 2018 World Cup, we can begin to look ahead to the potential matchups. And there are some great ones out there.

The 32 teams have officially been broken into their four pots of eight, from which the eight groups of four teams will be drawn on Dec. 1.

The rules for the draw are quite simple. The teams are broken up by FIFA rankings (not by geographical considerations this time around). Russia gets placed into Pot 1 with the heavyweights as the host nation in spite of being the lowest ranked team, according to the FIFA rankings. For the group stage, no confederation can have two teams in the same group, with the exception of UEFA, which can have two teams.

Here are the four pots for the draw. 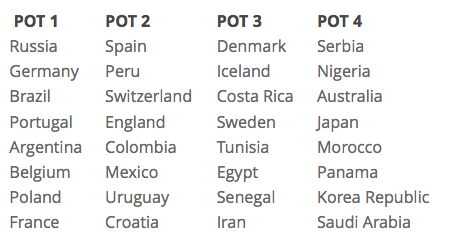 And here are some of the most intriguing scenarios for potential World Cup groups:

Let’s start with what could be the weakest possible group from the draw. Whichever teams draw Russia will surely be popping the champagne bottles from now until next June. They are so far behind the other teams in Pot 1, it’s not even funny. Peru was the last team to qualify for the World Cup after beating New Zealand in a playoff and Saudi Arabia is the lowest ranked team in the World Cup — next to Russia. The benefit of this group is that it would give Iceland the best possible chance of advancing, and with no USMNT in the World Cup, we’re all on the Iceland bandwagon.

Two biggest European heavyweights and tournament favorites would go head-to-head in this group. Unlike celebrating drawing Russia, whoever gets Spain in their group is going to rue the day. But this wouldn’t be a sharpie situation. Egypt is in their first World Cup since 1990 and are led by a potent attack including Liverpool’s Mohammed Salah. Likewise, South Korea powered through Asian qualifying largely, thanks to Tottenham’s Hueng-Min Son.

This is truly a group where any combination of two teams could emerge from the group stage. You never know quite what French team you’re going to get at a major international tournament and they’d have to be at the top of their game to survive these matchups. The same could be said for Mexico, quite frankly. Senegal will feature top players like Liverpool winger Sadio Mane and Napoli defender Kalidou Koulibaly. And don’t overlook Morocco, who overcame a very tough qualifying group with the Ivory Coast.

This group will also bring everyone’s memories back to 2002, when Senegal beat defending champions France in their first ever World Cup game. This might be the most dynamic group the World Cup would have to offer.

Another great candidate for a potential Group of Death moniker. Brazil and Spain are obvious choices and although Denmark were one of the last teams in, they are the top seed in Pot 3. Christian Eriksen’s hat trick in the final game against Ireland should be enough of a signal to the competition that they will always be a threat. Japan is one of the strongest teams in Pot 4 with several players plying their trade in major leagues around the world like Shinji Kagawa of Borussia Dortmund.

This group presents a lot of intrigue because it represents teams who will be dark horse favorites to go far in the tournament. Belgium had a lot of hype in 2014 and they will have even more this go around with stars like Eden Hazard, Romelu Lukaku, and Kevin De Brunye. Colombia had a hugely impressive 2014 World Cup where they made it to the quarterfinals. Senegal and Serbia would both be tough outs.

Seeing Argentina and England square off in a World Cup will always bring back memories of 1986. In their quarterfinal matchup, Diego Maradona scored the Hand of God goal and arguably the greatest goal in World Cup history four minutes apart. Then there’s Costa Rica, who made a Cinderella run to the quarterfinals in the last World Cup. After defeating Honduras in one of the intercontinental playoff matchups, Australia will be looking to make it out of the group stage for just the second time in their history.

These pairings might represent the most even group possible at the World Cup and the one with the most attacking delight. It might be a shock to see Poland on the top line in Pot 1 instead of teams like Spain or England. (And they may have gamed the system a bit to get there.) But with Bayern’s Robert Lewandowski leading the front line, they shouldn’t be discounted. Likewise, Uruguay will be led by the dynamic duo of Barcelona’s Luis Suarez and PSG’s Edinson Cavani. We’re all hoping and praying Zlatan Ibrahimovic turns out for Sweden. And although he might not be a household name, Saudi Arabia’s Mohammad Al-Sahlawi joined Lewandowski as the joint top goalscorer in qualifying.

Now this is a group that would truly have it all. Brazil versus England in a group stage match? Seriously? A rematch between England and Iceland after one of the biggest upsets in recent history at a major tournament when Iceland beat England in Euro 2016. And then there’s Nigeria, which made it through their African qualifying group undefeated and just recorded a major friendly victory over Argentina. This would be the most fun group possible at the 2018 World Cup.