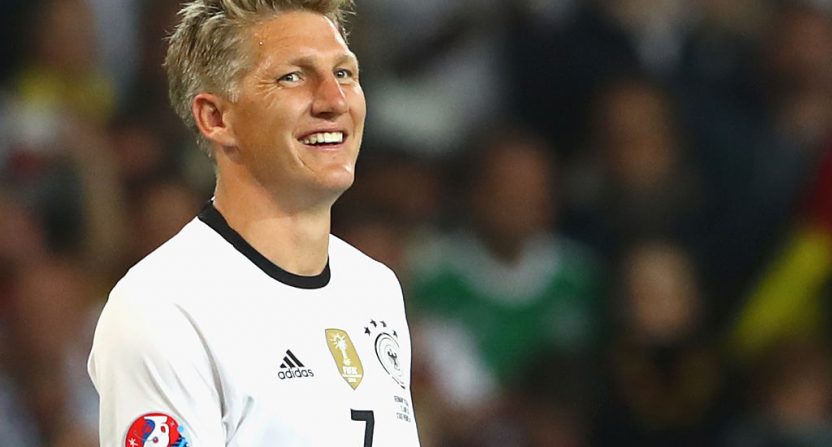 Referees get a lot of verbal abuse from everyone in sports. Players, fans and the media will hammer a referee when they make a bad call and will call them anything and everything under the sun. We’ve all done it and have said “you suck” to a referee who made a bad call that negatively affected our team. But this shows us that referees are human and sometimes can lead to some very serious consequences.

In 2011, Bundesliga referee Babak Rafati attempted suicide hours before a Bundesliga game. Luckily his assistant refs found him and were able to take him to a hospital and save his life.

Soon after, Rafati received a note from German star Bastian Schweinsteiger that made a huge impact in Rafati’s life. Then 27, the Bayern Munich star wrote to Rafati (translated), “Mr Rafati, there’s often setbacks in life. But you have to bounce back each time. I wish you all the best.”

Rafati took notice of Schweinsteiger’s extension of humanity and was grateful to receive his note.

“I was very deeply moved. He didn’t have to do that. He knew I would never referee again after this incident. It was an incredibly humane gesture.”

Rafati has made a great point about how depression is still the thing nobody talks about in soccer as well as sports. It’s something that is very serious but is still seen as a sign of weakness, which makes things worse to those who are clinically depressed. Just look at the reaction toward Landon Donovan for taking a sabbatical from soccer in 2013 due to depression. He was seen as abandoning the team or not caring about the United States making the World Cup.  And whether or not that was the main reason he was left off the USMNT for the 2014 World Cup, it at least had to have been on the mind of Jurgen Klinsmann.

Rafati never refereed a game since his suicide attempt. That was probably for the best. Considering Rafati was depressed, and surely not helping that he had a job that was low paying and causes everyone to hate you, it probably was the best move mentally. But that should be a reminder to everyone that even though referees may do things that hurt your team, that these people are human too and humans make mistakes. There’s criticism when a referee makes a mistake and then there’s going too far. Sadly, it seems like things go way too far, way too often.