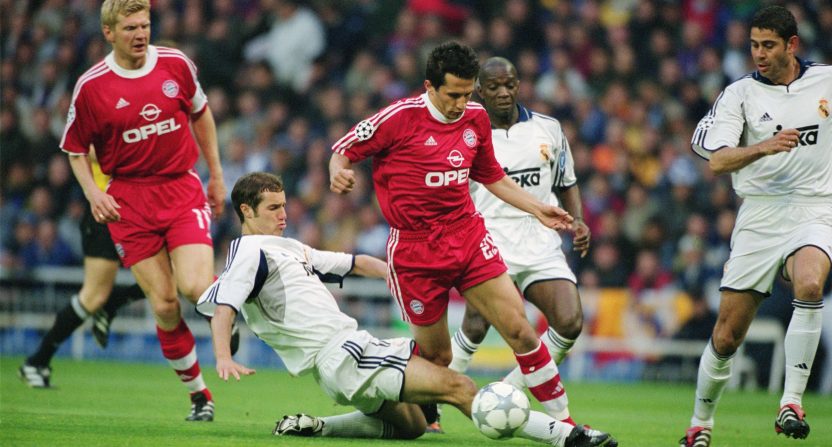 On March 31, 1976, Bayern Munich played Real Madrid for the first time. It was the semifinal of the Champions League, then the European Cup. Thanks in part to Gerd Müller, Bayern drew with the Spanish giants 1-1 in Madrid. In the second half, Müller was attacked by a fan who became known as el Loco Del Bernabeu.

Bayern’s all-time leading scorer would be fine, however. He would score twice in the return leg. Munich would go on to win their third consecutive European Cup later that season.

Thanks in large part to one crazed fan in Real, the first meeting between the two club giants wouldn’t soon be forgotten. However, that overshadowed what might have been the real beginning of this now famous rivalry. That honor goes to Paul Breitner.

Breitner was a German and Bayern legend, who had won a European Cup with the club and a World Cup with his country. But after the 1974 World Cup, he packed up and left Germany, heading to Real Madrid. Breitner, who was famously left wing, criticized Bayern as a “money-based aristocracy.”

The former Bayern left-back was injured during the first meeting between the two clubs, but fit for the second leg, Breitner was mercilessly booed by the Munich crowd for being a traitor.  After the match, a war of words between the two clubs ensued. Bayern President Wilhelm Neudecker commented that nothing about the Bernabeu impressed him. Real blasted the Germans for being arrogant and condescending. The rivalry was on.

The two clubs would have to wait over a decade before meeting again, but when they did, there would be fireworks. In 1987, Real and Bayern met once again in the semifinals of the European Cup. Bayern would host the first leg this time, and they would win easily 4-1. The match would be particularly ugly, however, with a pair of Madrid players getting sent off. To be fair, Bayern’s Lothar Matthaus should have also seen red for a reckless two-footed challenge on right-back Chendo. Chendo was incensed. The defender sprung to his feet and shoved Matthaus to the ground before teammate Juanito stomped on the side of the Germans face. Juanito’s night was over.

Bayern would go on to win the tie and advance to the final where they lost to Porto. But the semifinal left bad blood between Bayern Munich and Real Madrid. UEFA banned Juanito for five years following his violent stomp on Matthaus. Los Blancos players were angry that the German international got away with recklessly endangering one of their own.

Real Madrid didn’t have to wait long to get their revenge. The clubs met again in the quarterfinal the following season. Real lost in the first leg 3-2 but won 2-0 in the return to Madrid. It was the first time they advanced past Bayern Munich.

Meetings between Bayern and Real would go on hiatus until near the turn of the new millennium. In 1999, Real drew Bayern in the Champions League group stages. Bayern would win both group matches, which included a memorable 4-1 win in which “Danke Matthaus” banners could be seen all around the Olympiastadion.  Matthaus was about to leave his second stint at the club and head to America to play for the New York MetroStars, now New York Red Bulls. Real fans were happy to see him go.

Real had to see more of Bayern that season, however, as the two teams once again played in the Champions League semifinal. This time it was Vicente Del Bosque’s team that won and the Spanish coach showed he could learn from his team’s earlier mistakes against Bayern. Real Madrid went on to beat Valencia in the final.

They say familiarity breeds contempt and in 2001, Bayern and Real met again in the semifinal. The two sides must have hated each other.

This time, it was Bayern’s turn to get the better of their rival. Coached by the famous Ottmar Hitzfeld, Bayern played a stingy defensive game on the road to their first European Cup since the 70’s. Bayern’s defensive gameplan upset the Spanish giants, who felt that Bayern’s strategy wasn’t keeping with the spirit of the game. Bayern didn’t care and like Real a year before, Bayern would go on to beat Valencia in the final.

The two teams would have one more go at it the following season. This time it would be a quarterfinal matchup. Real, on the back of Zinédine Zidane in his prime, made quick work of Bayern before advancing to the final where they won their 9th Champions League against Bayer Leverkusen.

In 2007, Bayern would record quite an accomplishment against Real when Roy Makaay scored after just 10.12 seconds. It was a round of 16 match and Bayern was struggling in the league, but they still found it in them to get past their famous rival. Bayern had lost the first leg 3-2 in Madrid, but thanks to Mark Van Bommel and a rather colorful hand gesture following a goal, Bayern could squeak by on away goals. Makaay’s record for fastest goal in the Champions League gave Bayern all the confidence to overturn the first leg deficit. The rivalry might have cooled a little, but with players like Van Bommel, it still had some life.

In recent years, Bayern Munich and Real Madrid have become two of the premier teams in Europe. Both play high-flying attacking styles with big personalities between them. Bayern booked their place in the now infamous 2012 final in Munich by beating Real in a penalty shootout in the semis. That was the first time the two teams would decide a contest with penalties.

In 2014, Real got their finest result against Bayern with a thumping 5-0 aggregate scoreline. Real won 1-0 at home in the first leg. Heading back to Munich, Carlo Ancelotti’s team steamrolled Bayern with a 4-0 humbling of the then defending champions.

Today, Bayern Munich and Real Madrid will face each other for the 23rd time. Bayern has a slight advantage, winning 11 to Real’s 9, with a pair of draws thrown in. There are no shortages of storylines, be it Toni Kroos’ return to Munich, or Ancelotti’s first meeting with his former team since he was fired in 2015. Either side could come out victorious, and it’s hard to predict who will win.

The only thing for sure is that it’s one of the biggest matchups in European history. It’s been that way since the 1970s, and even if it’s not as heated as it once was, it will continue to be for a long time.