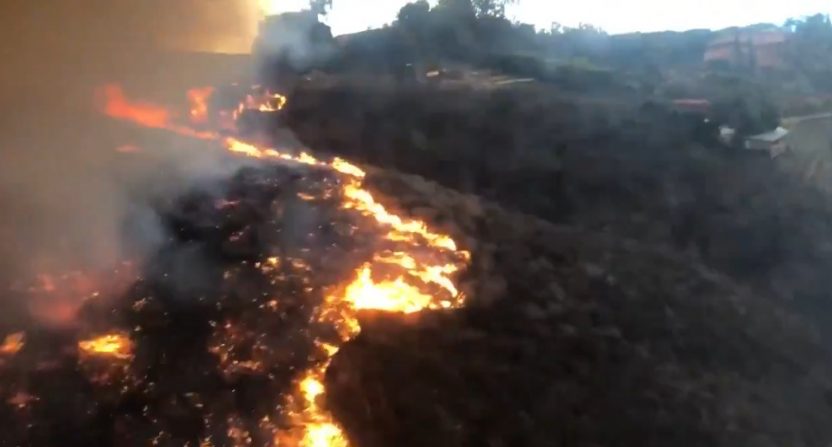 The wildfires raging in California have made their mark on the sports landscape as well. One of the most notable connections to sports came from former U.S. national soccer star/Fox analyst/one-time USSF presidential candidate/current Las Vegas Lights (USL) manager Eric Wynalda, who had to evacuate his Westlake Village home (in Los Angeles County, near Thousand Oaks and the Ventura County border) with his family at 3 a.m. Friday morning thanks to the Woolsey Fire, and later learned he lost his home to the flames:

It’s not good when the news trucks are on your street https://t.co/iU70qTN2EA

We lost our home but we are safe. You can rebuild homes, replace belongings, you can’t replace life. We cannot forget that now more than ever. Please support the ones who need it the most and continue to honor those who serve to keep us safe. Count your blessings folks- I am pic.twitter.com/IYlVT1aI86

Mark Zeigler of The San Diego Union-Tribune has more on what happened to Wynalda, whose wife left with their kids after a voluntary evacuation alert around 12:30 a.m. Friday. Wynalda stayed behind to pack clothes and soccer memorabilia, then heard pounding on his door around 3 a.m.:

A fireball from the blaze had landed next to his house, like a meteor.

“The firetrucks weren’t even there yet,” Wynalda said. “I went across the street and got an elevated look at the fire and I was like, ‘OK, that’s not good.’ There got to be so much smoke and ash that I couldn’t even see any more, so I left and got on the freeway.”

Wynalda texted back: I know, this is horrible.

Wynalda’s house was apparently the only one in the 162-home subdivision that burned, thanks to that fireball. But he and his family are okay. There have been plenty of other impacts across California, though, with six people dead as of Friday night, the town of Paradise in Northern California largely burned to the ground thanks to the separate Camp Fire, and hundreds of thousands of other homes threatened across the state.

And there are other sports-related impacts, too, with the Los Angeles Rams cancelling practice Friday (after 45 people in the organization, including 20 players and coaches, were evacuated) and the Oakland Raiders reducing their practice to a walkthrough thanks to air quality concerns; both teams are scheduled to play at home Sunday, but those game times are being evaluated for air quality and safety.

Also, it’s not sports, but the famed Paramount Ranch (used in shooting Westworld , Firefly, Gunsmoke, and many other productions over the years) is reportedly gone:

Sad for fans of @WestworldHBO and shows like Dr Quinn Medicine Woman, the Paramount Ranch western town movie set has burned to the ground in the Woolsey Fire @CBSLA #westworld #Woolseyfire pic.twitter.com/DhZWaGbr6g

And there were terrifying photos of the fire bearing down on Malibu:

Malibu burning during the #Woolseyfire as many fight to save it 📸 for @latimes @latimes pic.twitter.com/G3qurc6SOp

Our thoughts are with all those affected by the ongoing fires.