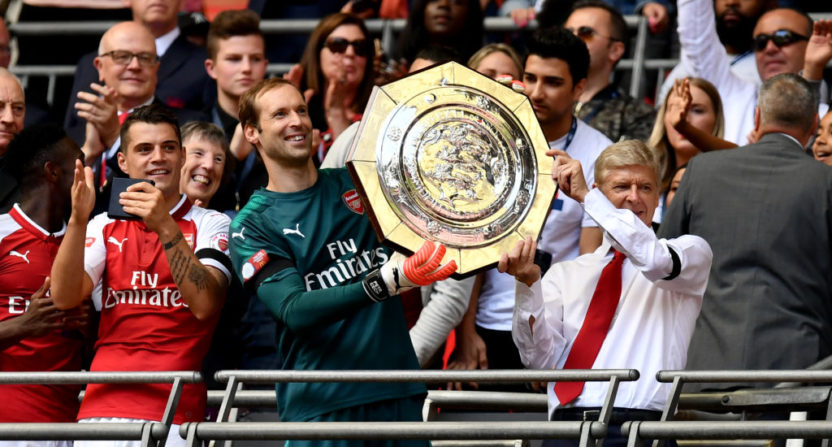 It’s not every day that you see the biggest managerial storyline of a Premier League season being whether or not a team will re-sign arguably their most successful manager in club history who has been with the club for over 20 years and is coming off a season where he just captured his seventh FA Cup. And yet that was exactly what was going on at Arsenal. Following a season where fans were hiring planes to fly “Wenger Out” banners over stadiums during games, Arsenal is bringing back Arsene Wenger and nearly the same group of his players.

There’s a lot of intrigue around this Arsenal season. Not only was Wenger’s position under fire last year, but the club was dealing with contract disputes from their two stars, Alexis Sanchez and Mesut Ozil, both of whom’s contracts were set to expire after this season. With all the turmoil that’s already been listed here, it should come as no surprise that neither player has a new contract entering this season.

Last year was a very divisive season for Arsenal fans. It seemed that half the fans wanted to move on from Arsene Wenger, while the other were wary of what the unknown could bring. You can imagine how thrilled that first half of the fanbase was when it was announced Wenger’s contract would be extended for another two years.

But do those fans have a right to worry? This is a make-or-break year for Arsenal. The way Arsenal operates their budget, the Gunners have to get back into the Champions League this season to avoid falling down and potentially become a second tier team in England. But can they do it being led by Arsene Wenger and two players in the midst of contract disputes?

Of course they can.

You see, at this point each Arsenal season is like another installment of the Fast and the Furious movies. When you walk into the theater to see a F&F movie, you know exactly what you’re going to get: Vin Diesel, Dwayne Johnson, fast cars, women in bikinis, the same team of characters (give or take one or two changes), and extremely unrealistic car chase scenes.

That is exactly what Arsenal have become over the past decade. They are a team that starts out aggravating the fan base by not addressing all their needs in the transfer market, only for that to be forgotten due to a very hot start before going through a slump around when daylight savings time ends. They hit a resurgence in the new year, face another cold spell around March, followed by a really strong finish. That’s the Arsenal way.

What gets lost in all the turmoil of last season is that it was actually more of an aberration than what should become the new normal. The Gunners may have dropped from second to fifth in the table, but they actually earned more points last season than they did when they finished runners-up to Leicester, and they won a trophy to boot. The reason for the drop was simply due to Chelsea, Tottenham and Manchester City playing at a blistering pace that they didn’t let up on all year.

It’s far more likely for Arsenal to pick up another 75 points this season when 75 points will be enough to finish in the top four, as it is most years.

As always, Arsenal’s transfer business this summer has been questionable from the outside and aggravating to their fans. They finally went out and signed a striker to replace Olivier Giroud, but they chose Alexandre Lacazette, a player who doesn’t start for France because he hasn’t been able to unseat… Olivier Giroud.

There is good news for the Gunners. This season, they will see the return of I-didn’t-play-in-a-tournament-this-summer Mesut Ozil. I hate to use a cliche such as that’s like a new signing all on its own, but it is. He’s that much of a different player in years that don’t follow the World Cup or Euros.

The dark cloud that will hang over the Gunners will be the contracts of Sanchez and Ozil. The media will spend the whole season trying to paint a picture that Sanchez and Ozil are distracted by their contracts, but frankly that’s a bunch of bologna.

If Sanchez truly wants to leave the Gunners, he’ll be playing for a big contract. Think about how many baseball players put up massive numbers in their walk years. This is the same thing.

Ozil is a bit of a different story. He’ll also be playing for a new contract, but he has something else to play for. Once the new year comes around, Ozil will be looking around at players like Marco Reus, Thomas Muller, Mario Gotze, Andre Schurrle, Max Meyer, and Julian Draxler and realize that he will certainly need to be on the top of his game if he wants to start for Germany, or even be on the squad, for next summer’s World Cup in Russia. I know it might sound blasphemous to suggest Ozil would be left off the team, but if he has a poor season and those players don’t, it’s certainly not unrealistic.

At the end of the day, Arsenal will be fine. They’ll get off to a roaring start which will have their fans dreaming of winning the league before they fade. I know this will happen because history suggests as much. By the end of the season, the fans will be just as frustrated with the team as they always are.

The difference between this year and last year is that they’ll be back in the top four.