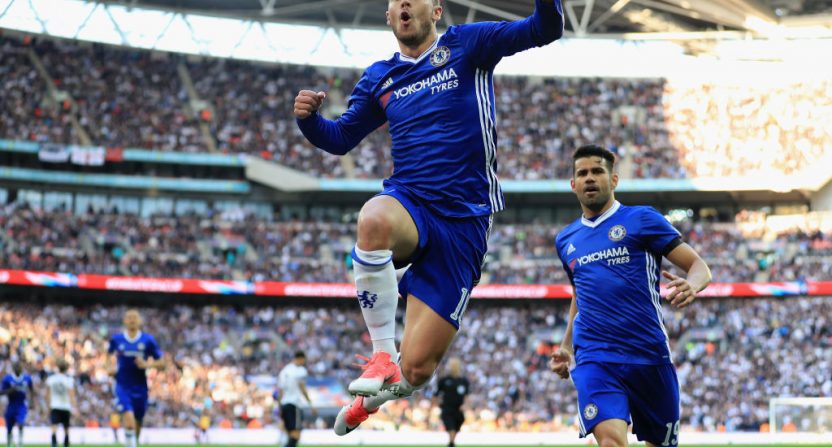 In a match pitting the top two teams in England, Chelsea and Tottenham put out an incredible display of exciting action in the FA Cup semifinal. In the end, Chelsea won 4-2 and advanced to the FA Cup final but both teams scored nothing but magnificently beautiful goals that are worthy of the “Magic of the FA Cup.”

Things started very early as Chelsea took the lead in the 5th minute. Willian hasn’t started many games this season but he’s shown to be one of the best free kick takers in the world. And Willian showed that on the big stage at Wembley. Hugo Lloris should have done a bit better to try and save the free kick but Willian still placed it perfectly and put Chelsea in a 1-0 lead.

WILLIAN! A magnificent free kick from the Brazilian gives Chelsea the early lead vs Tottenham. What a start! #FACup https://t.co/HIheUsCSHo

But as you would see multiple times, Tottenham answered the call and kept up to the Premier League leaders. In the 18th minute, Harry Kane dropped to the ground and with the lightest of flicks, directed the ball into the net with his head for the equalizer.

Harry Kane ties it up for Tottenham with a brilliant diving header into the far corner. All square on @FOXTV! #FACup https://t.co/4dlxarHxnt

Then after a rather baffling penalty from Heung-Min Son, Willian converted the penalty to put Chelsea up 2-1 right before halftime.

Have another look at the penalty decision and goal to give Chelsea a halftime lead. #FACup https://t.co/gaJ1HbTpkR

But once again, Tottenham came back. Maybe my favorite goal of the game, Christian Eriksen launched a perfect pass up to Dele Alli who slid and volleyed the shot into the goal. It was an incredibly difficult shot that easily could’ve sailed over the goal but Dele was perfect for the equalizer.

What a ball from Eriksen! What a volley from Alli! Spurs equalize a second time against Chelsea. #FACup #CHETOT https://t.co/Mpm4sEsyeK

But this was when Antonio Conte stopped playing games and brought on Diego Costa and Eden Hazard. Almost 15 minutes later, Conte subbed on Cesc Fabregas and then Chelsea pulled away. Eden Hazard booted the ball on the ground and placed it in the bottom right corner of the goal for the 3-2 lead.

Eden Hazard comes off the bench to give Chelsea a late lead in the #FACup semifinal. Is that the final blow? #CHETOT https://t.co/QSZa2st3MW

Then Nemanja Matic closed out the game with authority in the 80th minute. There wasn’t anything Lloris could do about this as Matic went upper 90 from outside the box and put the dagger in Tottenham’s FA Cup title hopes.

You cannot strike a ball any better than Nemanja Matic just did. ? ? ? #FACup #CHETOT https://t.co/rUgILaVBy6

Arsenal and Manchester City will square off Sunday where the winner faces Chelsea next month. Where Chelsea and Tottenham are trying for the Premier League, Man City and Arsenal are trying for a Champions League spot.

We have seen Arsenal’s struggles over the past couple months. I can’t imagine Arsenal fans will be satisfied even with a FA Cup Final win against Chelsea if they finish outside the top four.

Manchester City and Pep Guardiola had to lower their expectations since the start of the season but an FA Cup win would give Man City two trophies. Might not be the two trophies the fans and the team wanted or that the owners paid Pep to win but it would at least be a nice feather in the cap to build on for next season.