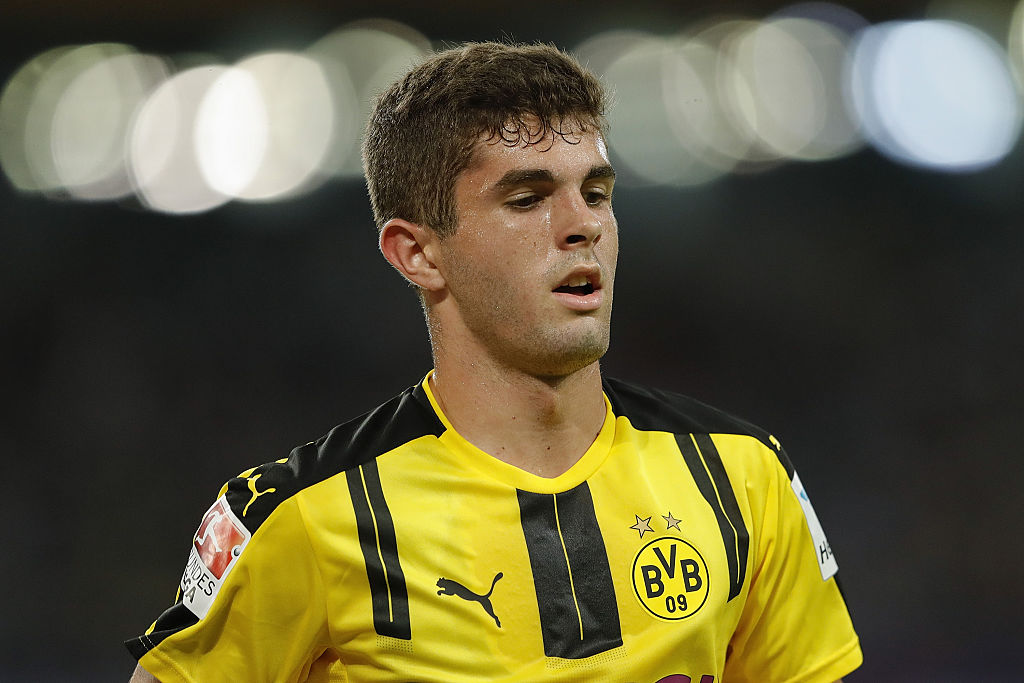 With time ticking down on the transfer window, it’s looking for all the world like U.S. national team prodigy Christian Pulisic is staying put at Borussia Dortmund.

Liverpool had come knocking for the 17-year-old attacking midfielder, who made a dozen appearances in his first season with the German club’s senior team last year and made a strong enough impression to earn six caps on the senior U.S. national team as well.

The wunderkind from Pennsylvania is suddenly a hot commodity, as anyone would be if he managed to get minutes with Dortmund before he was legally an adult.

Liverpool have made an £11m offer for Christian Pulisic, Borussia Dortmund’s 17-year-old winger.

There were others lurking. Stoke City, also of the Premier League. Fellow Bundesliga club RB Leipzig. CSKA Moscow. There were reportedly offers running as high as $20 million. A tall pile of money for a still largely unproven commodity. But Dortmund wasn’t interested in selling and Pulisic wasn’t interested in leaving.

This is in spite of the murderous competition for playing time at Dortmund, which just added Ousmane Dembele, Mario Goetze, Andre Schurrle, Mikel Merino, Sebastian Rode and Emre Mor to a midfield depth chart already bulging at the seams. Ilkay Gundogan and Henrikh Mkhitaryan are gone, but getting onto the field for Thomas Tuchel’s team won’t get any easier than it was last year.

Still, Pulisic wanted to stay, according to his father, a youth coach at the club.

Liverpool, a historic club, but one not even playing in Europe this season, is a step down from the second-best team in Germany, which is back in the Champions League and has a genuine chance of making a deep run – perhaps going as far as the final again, as it did in 2013.

And as the skillful midfielder, who signed with Dortmund as a 16-year-old in 2015, tries to become the first American outfield player to establish himself at a truly elite club, there’s no sense in running around looking for playing time. That’s the bit they don’t really tell you: every major club will confront you with a tough fight to get on the field. That’s part of the deal.

Say he left the midfield logjam at Dortmund for the Reds. Well, Liverpool added Sadio Mane and Georginio Wijnaldum to a midfield that was already overpopulated because last year they signed Roberto Firmino, James Milner and Marko Grujic. The year before that, they snapped up Adam Lallana, Emre Can and Lazar Markovic for their midfield corps. This is how it goes at major clubs. They hog talent, stockpiling it to create intense competitions in every line, to see who survives and who washes out. To see who truly makes them better.

It’s Darwinian by design. And running away from it serves no purpose other than to be drawn into some other fight someplace else. Some players bounce around for years, never quite getting around to the unglamorous work of convincing a coach that you should be on the field. The alternative is to go to a smaller club, but for a player such as Pulisic, who has already demonstrated that he can hang at Dortmund at such a young age, that would likely slow his evolution, even if he’d actually play more.

Because even if he doesn’t initially – or ever – win this battle for time, he’ll be fighting it daily. In addition to the aforementioned newcomers, he’ll be going up against Shinji Kagawa and Nuri Sahin and Gonzalo Castro and Julian Weigl in practice.

Part of “making it” at a big European club is tantamount to learning to deal with the perpetual competition for jobs, figuring out how to push through the clutter of elite talent and emerge from it with your name on the lineup sheet. Jumping from club to club in hopes of winding up slightly higher in some here-one-day-gone-the-next manager’s pecking order is a fool’s errand, a trap all too many fall into. So long as his club wants him and sees a future in him, and he himself is convinced he’ll get a fair shake, there’s little sense in Pulisic leaving one of Europe’s behemoths.

For an American to achieve that breakthrough among Europe’s elite, he’ll have to stick around long enough to make it so. It’s easy to make comparisons here, and perhaps they don’t hold up, but Landon Donovan gave up on trying to break into Bayer Leverkusen’s first team within months. Tim Howard accepted a move to Everton when he was benched at Manchester United. Clint Dempsey spent just a year at Tottenham Hotspur before cashing in with the Seattle Sounders.

These are disparate and complicated situations, and plenty of other things were at play, but they also reveal a central truth. No American truly capable of breaking that final frontier for his countrymen has given it very long.

Good for him. And good for American soccer.