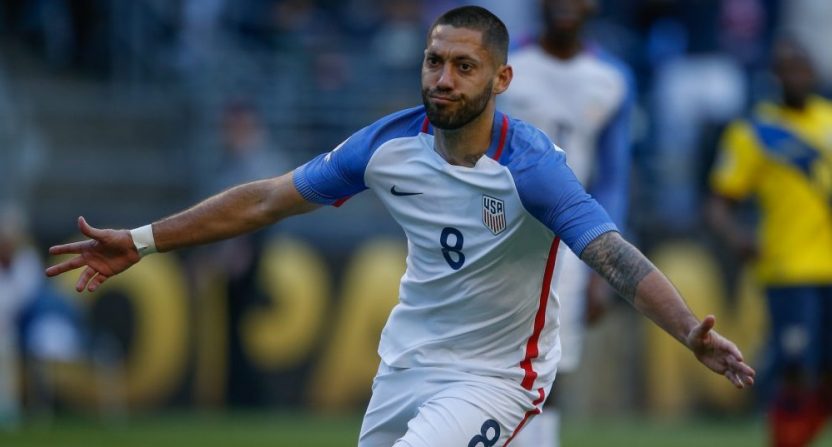 What if I told you that USMNT’s best player, and possibly their best-ever player, is not only not one of the first names written on the team sheet, but isn’t even a guaranteed starter at all?

That is the life that Clint Dempsey, second on the list of all-time US goal scorers with 55 goals, whose .46 goals a game dwarfs all time leader Landon Donovan’s .36, is currently living. And that is completely insane.

Since the 2014 World Cup, Clint Dempsey leads the USMNT with 16 goals, two more than presumed first choice striker Jozy Altidore and that comes with a major caveat. Since the 2014 World Cup, Dempsey has appeared in just 22 games for the national team, compared to 31 for Altidore. Of Dempsey’s 16 goals, 14 of them have come in competitive matches while just six of Altidore’s 14 have come in competitive matches.

Perhaps the big discrepancy in numbers is due to the fact that Dempsey has played in eight more competitive matches over the past three years than Altidore. But that in and of itself highlights why Dempsey should be the first striker Bruce Arena picks. When the US has an important game, Dempsey is almost always fit, while Altidore, who hasn’t been fit for a summer tournament since 2011, is often not.

The reasons Dempsey has been absent from the national team over the past three years have been understandable. Following the 2014 World Cup, then US manager Jurgen Klinsmann often left him off the roster so that he could get a look at who else the US had in the talent pool. This was the perfect time to do that as the US’s schedule was just a bunch of meaningless friendlies. The following summer, Dempsey returned to the team and led the entire Gold Cup with six goals.

Following the 2015 CONCACAF Cup loss, Klinsmann once again opted to leave Dempsey off the roster in an effort to give younger players experience in World Cup qualifying. There was nothing wrong with the move, as the US should have had enough firepower to win both games. (They won one and drew the other.) The following year, when the team had their backs against the wall, there was Dempsey scoring an early goal against Guatemala to set the tone for a 4-0 win. A few months later, Dempsey led the US in goals at the Copa America.

Dempsey’s most recent absence has been the most alarming, missing nearly eight months with an irregular heartbeat that threatened to end his career. When he finally returned to the national team on Friday night, Dempsey showed no signs of rust as he picked up his second career hat-trick with the USMNT.

Despite his frequent coming and going from the national team over the past three years, what’s clear is that when Dempsey dons the US shirt, he scores. Yet since the completion of last summer’s Copa America, there is one question that just seems to come up over and over.

@pkwestelWFAN so you start Dempsey 2018 Russia?

Yes, Clint Dempsey is 34 years old, but at this point it is ridiculous that we are still asking this question. Of course you start him at the 2018 World Cup. In Dempsey’s last seven games with the national team, he’s scored seven goals. No one else on the national team can even say they come close to that sort of consistency, with the exception of Christian Pulisic’s three goals and four assists in the five World Cup qualifying matches he’s played in.

Somehow, this is still a question, mainly because of the emergence of Bobby Wood, who in a year will almost certainly be the US’s best striker if he isn’t already. The simple solution for the US would be to pair Wood with Dempsey up top, a pairing that was very successful at the Copa America.

But nothing is simple when Jozy Altidore is around. It seems that you can change the manager, but you can’t change the perception that Altidore is the US’s top striker.

It’s easy to look at Altidore, whose 37 international goals places him third all-time for US Soccer, as a productive scorer. But actually looking at the numbers paints a whole different picture. Altidore’s 22 goals in World Cup qualifying, which is second all-time right behind Dempsey, certainly seems impressive, until you realize that all but four of them have come in home games. Of his four away goals, one of them was a penalty against St. Vincent and the Grenadines. Once Altidore steps outside of the United States, his production drops drastically. That is not someone that you want leading your attack at the World Cup.

Clint Dempsey is certainly not young anymore. But at 34 years old, he’s shown no signs of slowing down or losing a step. Despite his age, he continues to be the US’s most consistent goal scorer and hasn’t shown any signs of that letting up.

At this point, there’s no reason to believe that a year from now Dempsey won’t still be scoring goals at a consistent rate for the United States. If he is, then Bruce Arena has no choice but to start him at the 2018 World Cup. It shouldn’t even be a question.