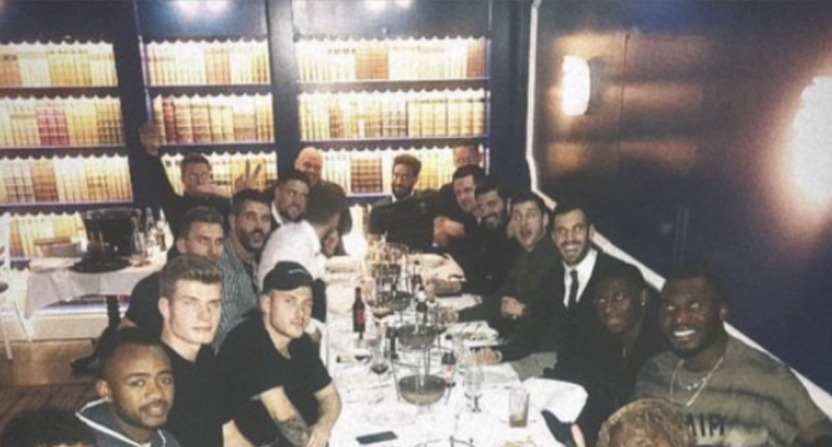 Ignorance isn’t usually an effective defense in court, but when the FA is involved and if you have no other defense, you may as well go with that on the chance it actually works. That worked for Crystal Palace goalkeeper Wayne Hennessey, who was cleared by the English soccer governing body of making a gesture that very closely resembled the Nazi salute because he proved he had no clue what Nazis were.

At a holiday party a few months ago, an Instagram post from teammate Max Meyer showed Hennessey in the background with one hand over his mouth and the other pointed straight up that many took as the gesture Nazis use. Hennessey has maintained that while it looked like he was making an inappropriate gesture, he was merely trying to get the waiter’s attention while the waiter was taking the pic.

After nearly four months, The FA ruled that due to Hennessey’s “lamentable” ignorance on Nazis, fascism, and Adolf Hitler, Hennessey would not be punished for his action.

“Mr. Hennessey categorically denied that he was giving a Nazi salute,” the commission said in its written reasons. “Indeed, from the outset he said that he did not even know what one was. Improbable as that may seem to those of us of an older generation, we do not reject that assertion as untrue. In fact, when cross-examined about this Mr. Hennessey displayed a very considerable – one might even say lamentable – degree of ignorance about anything to do with Hitler, fascism and the Nazi regime.

“Regrettable though it may be that anyone should be unaware of so important a part of our own and world history, we do not feel we should therefore find he was not telling the truth about this. All we would say (at the risk of sounding patronising) is that Mr. Hennessey would be well advised to familiarise himself with events which continue to have great significance to those who live in a free country.”

In a time where Nazism and white nationalism are making a resurgence, it’s tough to believe that a 32-year-old man who has access to the outside world doesn’t know what a Nazi is, but it’s possible, albeit unlikely. While it sounds equally as impossible to believe, there is a small percentage of American adults, who are otherwise functioning members of society, that don’t know who the President of the United States is.

Despite that, I have my doubts. It should be noted that Hennessey knows what Remembrance Day is, so he at least gives off the impression he’s somewhat aware of history. Even though Hennessey was cleared by the FA, which seems more likely: that Wayne Hennessey really didn’t know what a Nazi was and either came to give a similar looking gesture on his own or imitated something he saw like an impressionable five-year-old, or that he knew what he was doing and did it either as a joke or was being serious and convinced the FA he was completely ignorant?

Either way, it might benefit the FA to have players take some sort of history class or visit a museum or something.