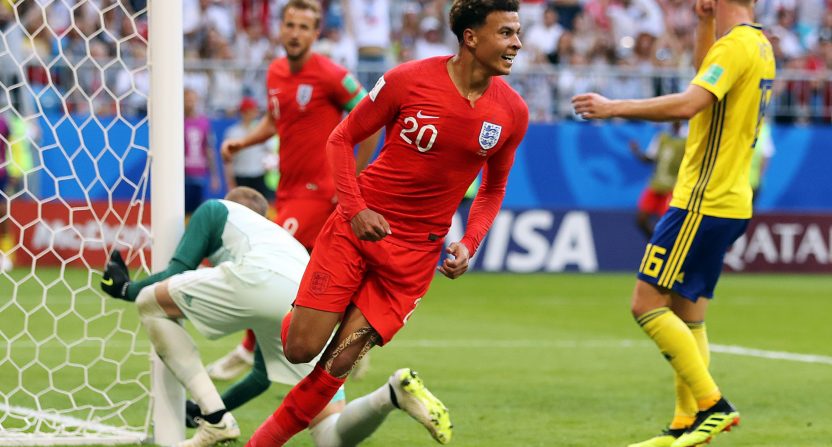 It’s no secret that this hasn’t been a banner season for Tottenham Hotspur. This was supposed to be the year their young team matured and took the next step. That was going to happen in their glorious new stadium nonetheless.

Instead, the team has been surrounded by a constant state of flux. Star striker Harry Kane entered the season looking not fully fit after rushing back from an ankle injury last March. They made zero signings this summer, failing to build on their already thin depth. Their move to the new stadium? That was delayed twice before finally being put off until next year.

And yet, Spurs are sitting third in the table, three points behind second place Liverpool and having just handed Chelsea their first defeat of the year.

Despite the concerns of their fans, and despite their perceived bad form, Spurs are doing just fine and that’s all thanks to the continued emergence of Dele Alli.

Now, emergence is an interesting word to describe a player who scored 18 goals two years ago, has appeared in two major international tournaments by the age of 22, and won back-to-back PFA Young Player of the Year awards.

And yet, it’s an emergence because this isn’t the same Dele Alli. This is midfielder Dele Alli, the player that Spurs thought they were getting when they poached him from MK Dons for just £5 million back in 2015.

Alli is a two way midfielder. He’s a player who can get into the box and be an attacking threat, but more importantly, someone that can also control the midfield. He’s a player that can start the attack. That was the role he played in MK Dons’ thrashing of Manchester United in the League Cup, as well as his role the rest of the season.

When he came to the Premier League, he initially struggled there. That’s not surprising at all, as he was 18 and still getting used to not only a very physical league, but a much higher level as well. At the time, he was a brash 19 year old that was still learning how to control his emotions. Some wanted to write him off after a crucial red card against West Brom in the thick of a title race. That’s what happens when you’re 19. That’s an age where you’re supposed to make mistakes and learn from them.

To help him adapt to the Premier League, Tottenham manager Mauricio Pochettino moved him up the field. The attacking role helped ease him in as Dele didn’t have to focus on his defensive responsibilities as much.

What happened next is something no one saw coming. Dele scored 10 goals and added 11 assists in all competitions. He followed that up with 22 goals and 13 assists becoming Spurs’ second fiddle to Harry Kane. Last year, a year in which he “struggled,” he scored 14 goals with 13 assists.

This year, Pochettino has moved Alli into a deeper role, the role that was originally envisioned for him. The reason is a combination of injuries and Moussa Dembele’s age, but mostly because Dele is finally ready to grasp the role. And grasp it he has.

His numbers may appear to be down this year, albeit they’re just slightly lower then his numbers from this time last year when he got off to a slow start, but this year they’re going to stay down. Instead of being the man finishing or playing the final ball, Dele has become the man playing the first ball. He’s the one starting the attack.

One of the knocks on Tottenham this season has been the perceived lack of goals. Dropping Dele into a deeper part of the field will certainly contribute to that as it does take away one of their better goal scorers.

However, the lack of offense really comes down to several other issues. Harry Kane entered the season clearly not fully fit. Son Hueng-Min missed time due to the Asian games. Christian Eriksen has battled injuries. Lucas Moura and Erik Lamela being fit is great, but the lack of consistency among the other players has made it difficult to develop any chemistry.

Last Saturday against Chelsea was the first match all season where Tottenham had Kane, Eriksen, Son, and Alli on the field together. No surprise they looked like the Spurs of old.

Defensively Tottenham have been a mess this season as well. Jan Vertonghen and Danny Rose have both been out of the team with injuries. Through 13 league matches Spurs have used a whopping three different goalkeepers. How you can find any defensive stability with that much turnover is beyond me.

And yet, there are Tottenham. They’re not only sitting in third place, but they have the joint most points of any third place team after 13 matches in Premier League history.

Europe doesn’t have MVP awards the way the United States does. They have the Player of the Year award, but that’s far less ambiguous than defining what an MVP is. It usually (understandably) just goes to the best player on the best team. Rarely do you get a situation like two years ago where a player like N’Golo Kante’s contributions are recognized.

If you had an award to recognize the most valuable player, the player that if you removed him his team would be significantly worse such as David de Gea from Manchester United last year, this season it would go to Alli without question.

It’s no coincidence that Tottenham are 8-1 when Alli is in the team this season, and just 5W-1D-4L without him (Brighton and Manchester City included as Alli only made cameos). A big reason Spurs’ Champions League campaign is in shambles is due to injuries keeping Alli out of three of their first four matches.

Alli’s rise in this role shouldn’t come as a shock. This is the role that he was born to play. His Premier League experience, as well as playing a very similar role for England have finally allowed Spurs to unleash him there.

For years everyone always said Spurs most important piece was Harry Kane. In the past years that was true, but this year, it’s Dele Alli.