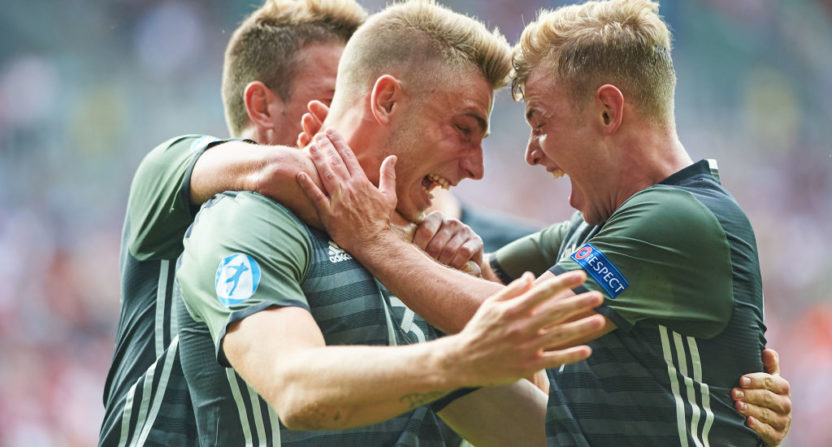 Though England’s U-21’s were dumped out of the semifinals of the European Championships in the most English way possible, penalties, there is no denying that at all levels of youth soccer of late, England has been progressing rapidly.

Their U-17’s lost in the Final at the European Championships in May, but they’ve won two titles at this age level since the start of the decade. At the U-19 level, they were semifinalists last year and qualified for this year’s edition. They won the U-20 World Cup in May as well, the first time an English team has won any World Cup in 51 years, and the senior squad is full of young players who were eligible for the U-21 tournament as well as other age groups. There is no doubt that English youth development is becoming a strength, But, will it finally lead to success at senior level?

England hasn’t made a semifinal of a major tournament since when they hosted Euro 1996, and their unceremonious exists from the last two major tournaments certainly raised alarm bells.

And its not just the biggest English teams that are developing these squads exclusively. Far from it, actually. Championship clubs were well represented, as well as players from clubs like Everton, Southampton and Leicester. Many of these players have been getting minutes at these clubs and impressing, and the same holds true for the likes of Everton’s Dominic Calvert-Lewin, who scored the winning goal in the U-20 World Cup Final against Venezuela, as well as others on the World Cup winning squad. Many of the players who represented England at these two tournaments have already received meaningful minutes for their clubs, which is a stark departure from the cries from the past which said that young, English players weren’t being given those meaningful opportunities to succeed in the top flight.

But beyond the composition of these squads, and the clubs these players represent or were reared by, these teams are starting to play better football at all levels too. The style isn’t the traditional England kick-and-run 4-4-2 lump it up to the huge target striker, but building from the back, playing attractive and free-flowing football, and using the growing technical skills for these players to great effect.

It’s one thing to shower praise over England’s improving youth development and the fruits of that labor appearing at youth tournaments all across the world. It’s another entirely to translate that success to those on senior level. And with the microscope that always hovers over England’s senior team, will the pressure be turned up even higher to succeed knowing what is in the pipeline?

England’s best success at youth level until this summer was the U-21 European Championship tournament in 2009, when they lost in the Final to Germany. Germany’s squad included the likes of Neuer, Boateng, Ozil, Khedira, Hummels and yes, Fabian Johnson too. England’s most successful senior player from that team? Theo Walcott, but that XI was littered with the likes of Adam Johnson, Mark Noble, Jack Rodwell and other players who failed to meet their potential.

What’s on tap for Gareth Southgate and the clubs is to work to maintain the form and promise of many of these young players, no matter what level they’ve been playing at and make sure that their trajectories continue upward. After the failure to qualify for Euro 2008 and the Round of 16 destruction at the hands of Germany in the 2010 World Cup, many wondered whether England was developing enough talent to keep up with the elite in Europe and the rest of the world. In 2017, it’s clear that their youth development isn’t necessarily the problem anymore.

If a grand total of five or six players from these tournaments combined because nailed-on fixtures for England’s senior squad in the future, that should be considered a success. But even then, England’s youth development has radically improved since the FA went back and revamped their entire development structure, in order to one day see success at the Euros or a World Cup. They have largely done their part, now it’s up to the clubs, the players, and Gareth Southgate to keep the positive momentum going.

England’s talent on the whole is not in the world’s top five, but they’re broaching the top 10. Group stage and round of 16 exits should no longer, and haven’t been, acceptable, especially with the amount of young talent all types of clubs are producing across the country.

Not that English football needs higher expectations because it’s always under huge pressure regardless, but the realistic expectations for England should be growing now that there is proof of concept at youth level.

The excuses about a lack of talent are gone, because the successes at youth level are not flukes. It’s time for the senior team to capitalize on them and live up to their potential, for once.