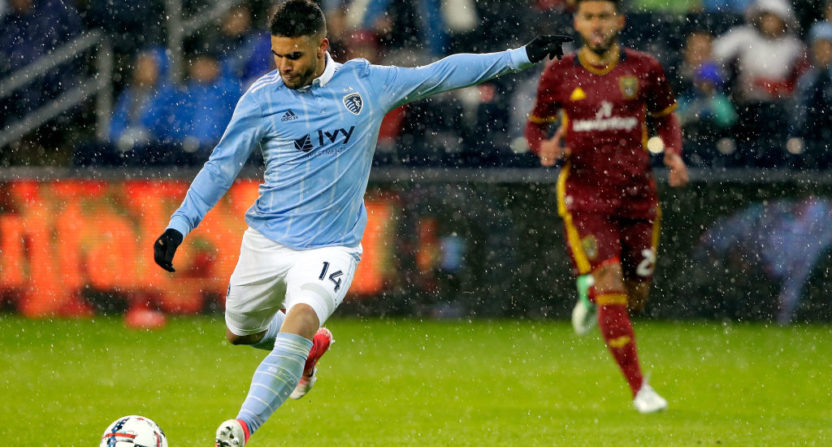 On another slow Tuesday during the dog days of summer, MLS gifted us a blockbuster trade so we’d have something fun to talk about before the US play Jamaica in the Gold Cup final on Wednesday.

It started when Taylor Twellman reported that a deal was close to being finalized that would send Sporting KC’s star striker Dom Dwyer to Orlando City SC for a large amount of cash:

This deal had been tossed around as a possibility in the days leading up to the finalization — it has since been confirmed by the clubs — but the money sent to SKC for Dwyer is shockingly high, easily breaking the MLS intra-league transfer record. Dax McCarty was sent to Chicago for a large amount, and Orlando received a ton of cash from Minnesota for Kevin Molino, but $1.6 million changing hands is unprecedented.

Dwyer has played for Sporting since 2012, and started upwards of 30 games every season. He’s been a huge player for them since 2013, starting and playing 72 minutes in the 2013 MLS Cup final (won by SKC over RSL) and netting 22 goals in 2014, which would have been good enough for a Golden Boot if Bradley Wright-Phillips wasn’t setting records that year.

Even in the last couple of seasons, as Sporting struggled to give him credible attacking contributors, he scored 33 goals since 2015, helping SKC win the US Open Cup and contend in the Western Conference every year since that championship. They could have been at their peak in 2015, when Krisztian Nemeth was scoring Goals of the Year, but Saad Abdul-Salaam hit two posts in the playoffs against eventual MLS Cup champs Portland Timbers and that was that.

Dwyer hasn’t been a world-beater without Nemeth, who left under suspicious terms before 2016 — Dwyer has five goals and an assist in 14 starts — but that’s not how he operates. His value lies in his dogged work as a lone No. 9, and his ability to draw central defenders out of position with physical hold-up play and press dilly-dallying defenders with more effectiveness than any MLS forward bar Maxi Urruti. He won’t go out every season and score with the likes of BWP, as he is less of a threat in the air and he doesn’t have that kind of poaching instincts.

Sporting are in second in the Western Conference and into the semifinals of the US Open Cup this season thanks to a truly dominant defense and Tim Melia’s goalkeeping, not as much because of Dwyer or Benny Feilhaber. They saw their starting striker’s value skyrocket when he got US citizenship and scored two goals in his first two USMNT matches, so they probably started seriously looking at some offers, whether from MLS peers or overseas.

Orlando, who took Dwyer in on loan when they were in the USL in 2013 and saw him become a fan favorite, appeared to have wanted him badly, and with a stagnating roster and a bunch of allocation money sitting around from the Molino deal, they went after the London native.

Seemingly with all the leverage, SKC negotiated their way into the most lucrative trade in MLS history, and now have A LOT of cash to spend on an elite replacement. We’ll get to that in a minute.

OCSC, you may remember, have a guy named Cyle Larin already on their roster. Larin happens to be MLS’ best young striker, the future of Canadian soccer and a consistent target for rumors of an even-more-lucrative deal to a top European club. The Purple Lions likely have one of two things on their mind after making this deal for Dwyer, and we don’t yet know which: 1) a non-MLS team ready to pay a lot of cash for Larin, hopefully enough to make up for the sum paid for Dwyer, or 2) a Larin-Dwyer striking combination for the rest of the year and beyond in a quest to make a run in the Eastern Conference and maybe even play deep into November.

The immediate assumption of many after seeing that Dwyer would be headed to Florida was that Larin would finally be sold for big money. Rumors had been swirling for months, since he broke out as a rookie in 2015, and have persisted even after his value presumably dropped when he was arrested for a DUI in June. Fans would be disappointed to see Larin go, but happy they were able to get a nice haul for him despite the off-field issue and especially happy that a familiar face and fan favorite would be coming in as an immediate replacement.

But at the time of this writing, there has been no news of a Larin selling, or even any new rumblings. That means the second option described above is looking likelier by the second, and that means bad news for Orlando, for a couple reasons.

For one, Larin and Dwyer together up front does not seem tactically feasible right now. Both are physical bruisers whose first instinct is often to check to the ball rather than to run in behind. Larin is more of a poacher than Dwyer, while the latter adds defensive chops and a work rate rivalling David Villa’s, but those differences are not enough to mask the obvious tactical inadequacies that come with playing two hold-up strikers together up front.

Those two hold-up strikers are more likely to take up each other’s space and eventually crowd each other out in the half-space between the opponents’ backline and central midfield. Playing two forwards together necessitates that they have different spacial tendencies and avenues of goal-scoring; hence why Clint Dempsey and Chris Wondolowski have never started up top for the USMNT, and why Ola Kamara and Kei Kamara would have never worked in Columbus.

Maybe, in the short-term, Kaka’s winding runs and Carlos Rivas’ field-stretching runs out wide will allow Orlando win some games right off the bat with Larin and Dwyer on the field together. But as we’ve seen with Dempsey and Nicolas Lodeiro in Seattle, and Kamara, Juan Agudelo, and Lee Nguyen in New England, short-term attacking success does not always give way to future success if tactical differences are sufficiently severe.

Jason Kreis will learn this in time. He and the front office will also learn that they have no money left, a difficult realization considering how weak Orlando is in almost every other position on the field. Every center back played next to Jonathan Spector has looked out of place and mistake-prone; left back Donny Toia is replacement-level at best; they need to figure out their central midfield situation, because Antonio Nocerino is too old and Cristian Higuita may not actually be a d-mid; and Rivas is an incredibly raw talent who desperately needs some serious fine-tuning to be a starter in this league.

They’ve lost this season because of the above weaknesses, not because Larin hasn’t played well (he has eight goals this season) or even because Rivas and Giles Barnes aren’t good enough. They needed all that Molino money — and eventually Larin money — to reform the rest of the roster. If they manage to sell their prized Canadian in this window, they’ll have an immediate replacement and some cash to spend on bettering the rest of the roster.

If they don’t, well, they won’t be in a great place.

Meanwhile, Sporting KC have MLS’ best defense, legitimate chances at two trophies and now $1.6 million sitting around to spend on a Dwyer replacement. Right now it looks like Nemeth, who had been playing in Qatar, is the target:

Per league source, SKC is in talks with Columbus Crew about top spot in allocation order as they try to bring Krisztian Nemeth back to #MLS.

Nemeth was a star for them, and while he played on the wing with Dwyer up front the last time he was in Kansas City, he can also play striker, and that’s presumably where he’d play if he did end up with SKC. A front three of Gerso Fernandes, Nemeth, and Latif Blessing looks pretty solid.

The roadblock is the allocation order, which is the way SKC would have to go if they are to acquire back the Hungarian. Columbus Crew SC hold the top spot, so Sporting would have to strike a deal with them in order to move up the rankings and be able to sign Nemeth. As a result, the Crew — who have some needs of their own — have all sorts of power over SKC.

Teams trading GAM and/or TAM to acquire the top allocation spot is nothing new. Philadelphia had to do it to sign Alejandro Bedoya last year, and D.C. United did it with Houston earlier this season to pick up Deshorn Brown. The problem for Sporting is that they now have a large bundle of cash ready to moved, and Columbus would very much like a large portion of it if they’re going to give away a chance to sign a talented former MLS player or overseas US international.

Nemeth is interested in returning to the league, as per the Kansas City Star’s Sam McDowell, so Sporting have that going for them. But they have some negotiating to do.

Whether Nemeth turns out to be as valuable as Dwyer has been has yet to be seen, and it’s fair to question selling a key goal-scorer in the middle of a trophy-contending season. In their defense, though, the amount of cash they got for Dwyer is enough to sign a capable replacement (and possible upgrade) and much more, if they play their cards right.

It’s not too hard to see which team is better set for the future, even with the many variables still in play.