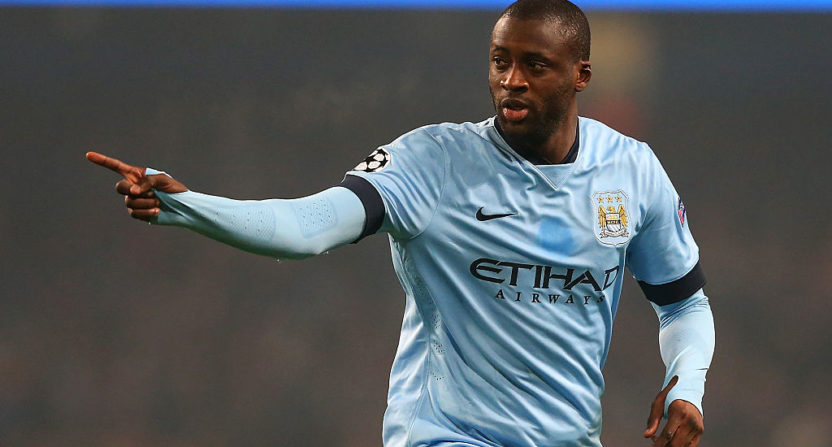 A suicide bombing at an Ariana Grande concert in Manchester, England Monday night killed at least 22 people and injured at least 59 more, and it’s sparked tributes and actions from across the world. One sports figure who wants to make a difference in the wake of the bombing is soccer star Yaya Touré, a midfielder for Manchester City. Touré and his agent Dimitri Seluk have pledged to donate £50,000 each (£100,000 total, or almost $130,000 U.S.) to victims of the attack. Here’s more from Sky Sports News:

Touré’s representative Seluk later told Sky Sports News HQ: “The news an eight-year-old girl went to see her favourite singer and didn’t return home is too much to bear.

“Yaya and I want to help. We talked this morning about what happened and he asked me what he thought we could do.

“We have agreed to donate £50,000 each to help the victims of this terrible crime. It doesn’t matter whether the victims are from Manchester or not.

“Those of us lucky enough to work every day in football can do so because of the generosity of fans across the world.

“Yaya is from Cote D’Ivoire (Ivory Coast), I am Russian. It doesn’t matter. Today is a chance for those of us in football to help out.

“My son is eight years old and I can’t image the pain and the suffering that the parents of Saffie will be going through today.”

According to Sky, Manchester City manager Pep Guardiola’s wife and two daughters were also at the concert, but escaped unharmed. It’s clear that the attack made an impact on all of Manchester and beyond, though, and it’s good of Touré and Seluk to step in to help. Touré previously sent a tweet about the attacks Tuesday night:

Such terrible news in Manchester. Thoughts and prayers with all those affected ??

This gesture from Touré and Seluk is just part of the tremendous outpouring of support for the victims, but it’s something that could make a big difference for those affected. It’s cool to see them contribute this way.