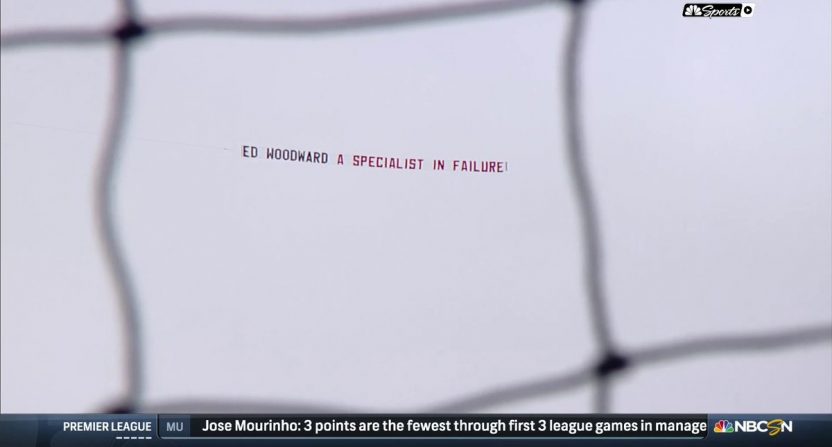 To say Manchester United is in turmoil is an understatement. Nobody involved seems happy and some people, like Jose Mourinho, isn’t afraid to display his unhappiness publicly.

To recap, Manchester United made a rather light splash in the transfer window, despite Mourinho expressing a need to improve his squad and keep up with the other top teams in England and the rest of Europe. Executive Vice-Chairman Ed Woodward, claiming that United has already given Mourinho hundreds of millions to get the players he wanted to make the team into his own pretty much said that Mourinho needed to deal with the players he has.

That impasse has created a division among United fans. Some fans blame Mourinho for the struggles of the team as well as playing very unentertaining football and want him sacked, potentially for former Real Madrid boss and current free agent, Zinedine Zidane. Others blame Woodward for going after players who raise United’s stock prices and are more of a fit for United’s worldwide marketing reach rather than how well they fit within the team and in doing so, is hanging Mourinho out to dry at a crucial time; especially when they see their hated rivals Liverpool spending lots of money and building themselves a title contending side as well as neighborhood rivals Manchester City winning trophies left and right.

In their match against Burnley, a group of Manchester United supporters flew an airplane banner over Turf Moor pinning the woes on Woodward, containing the message “Ed Woodward A Specialist in Failure.”

A group of Manchester United fans had this banner flown over Turf Moor today 👀 pic.twitter.com/fv5P7qbzA7

The group, “A Voice From The Terrace,” claimed responsibility for the airplane banner and explained on Twitter why they flew the banner.

A recap of why the banner has been sent. Over the next few days we'll be going into detail why we have concluded that Ed Woodward is a specialist in failure #BURMUN #MUFC #UNITEagainstED pic.twitter.com/ppksYLo9v0

“A plane flew over Turf Moor today, arranged by a group of Manchester United supporters disillusioned with Ed Woodward’s stewardship of the club since 2013.”

“This statement was made in order to challenge the current media narrative of focusing on the manager, whilst ignoring where the issues of the club truly lie.”

“Many of the problems stem from Ed Woodward’s continuous undermining of Manchester United managers in the transfer market, in matters of the playing squad, and in his inconsistent approach to recruitment and retention of managers and players.”

“An accountant selecting which players Manchester United do or do not sign based on perceived resale value, ‘social media interactions’ and marketability, has resulted in one of the most unbalanced United squads of recent times, incapable of producing entertaining football and challenging for the top honours.”

“To Quote Ed Woodward himself – “Watch this space””

While Mourinho can’t be absolved of all blame, these people do have a point. Ed Woodward was the guy in charge when David Moyes and Louis van Gaal were hired and while they won a couple trophies under Van Gaal and Mourinho, it’s safe to say that United has regressed a bit, while spending crazy amounts of money, over the past five years. Woodward, as well as the Glazer family, are pretty much the only people in charge who has been around all that time.

However this saga ends, it probably won’t satisfy too many people. United’s best course of action might actually be to sack both Mourinho and Woodward but as long as United’s stock keeps climbing and they keep making money, the Glazer’s are keeping Woodward. It’s not like they’re watching United matches, the NFL season is starting up.