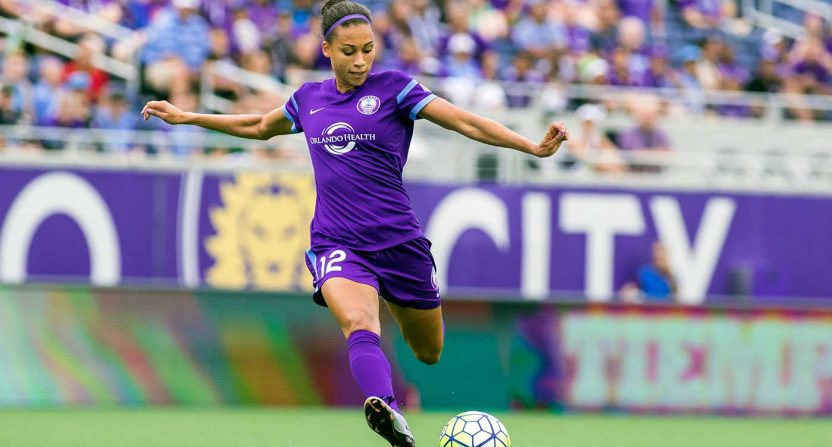 In 2011, in an isolated foreign country 2,000 miles from her nearest family member, Kristen Edmonds felt her ankle twist underneath her. The pain was suffocating. She rolled her ankle and landed on top of it, eliciting a pained scream as she waited for trainers to rush onto the field.

“I knew I had done something but I didn’t know how bad it was.”

Edmonds, a New Jersey native who was 24 at the time, was playing professionally for Stjarnan in Iceland’s Urvalsdeild kvenna women’s soccer league when the injury occurred. After a college soccer career at Rutgers, Stjarnan was her first pro experience.

Her Icelandic trainers and doctors initially told her she had sprained her ankle, a manageable injury that would only set her out for a couple of weeks.

But during the rehab process, her ankle “just didn’t feel stable,” as she recalled later.

“I tried to continue playing, and I could run straight, but I couldn’t cut, I couldn’t stop, and it was just really painful every time I did something.”

Edmonds managed to finish the season, getting substitute minutes despite the nagging injury. Some mornings, she said, were so painful that she struggled to walk. “I just wasn’t myself.”

When she went back to her regular doctor in the United States, an MRI revealed Edmonds had torn every major ligament in her ankle. Reconstructive surgery was scheduled (it would be her first time under the knife) and a lengthy rehabilitation process was to begin immediately, aimed to repair an injury that posed a serious threat to her prospects of playing soccer professionally.

“It meant to me that my career was over,” Edmonds said. “I wasn’t sure if teams were going to pick me up again or if I would make any transfer windows … I was immediately devastated.”

The injury was an unprecedented blow for a young player just breaking into the pro scene. Edmonds had been playing for semi-pro clubs in the U.S. after her college career wrapped up in 2008, and along with her agent, had been searching for trials and contracts around the world before the deal in Iceland came along.

“My road to becoming a professional athlete took me a little bit longer than most,” she conceded. “But once I got there, there was no way I was going to let an ankle surgery stop me from continuing to live my dream.”

There were doubts and worries early in the rehab process, but a recovery period of four to six months was put in place. Edmonds returned at the beginning of the fourth month.

From a medical perspective, her recovery was unique due to her status as an athlete and desire to come back as quickly as possible — teams don’t generally like to wait on an unproven player.

Edmonds spent four weeks in a cast after the surgery, two weeks longer than usual for a person in her position. The goal was to let the healing occur naturally, and it worked, as she was walking immediately out of the cast. Not long after, she was able to start running and doing more extensive workouts.

In between transfer windows, Edmonds worked at Planet Fitness, bringing in extra cash and giving her a place to work out every day.

“I spent quite a bit of time at Planet Fitness,” Edmonds recalled, almost fondly. She would go in before or after her shift (sometimes both) to ride a stationary bike, run the treadmill and lift weights. It was a labor intensive process, aided by her own little community of gym rats.

When she emerged, Edmonds was left searching again for a pro team that would take her in. She and her agent asked around for trials and potential deals, a nerve-wracking process that can make or break a player’s career. Edmonds knows first hand; she was invited to Sky Blue FC’s training camp before going to Iceland and was the last cut. Her injury made it that much tougher.

A transfer window had passed by the time she had recovered, meaning she would have to wait around until the next one to have a shot at being signed. Teams passed on her, wary of the injury and unwilling to take a chance. When WFC Rossiyanka, a Russian side and UEFA Champions League regular, offered a trial, she jumped at the opportunity.

Edmonds traveled to Cyprus for her trial, where Rossiyanka held their preseason. It took two weeks of evaluation and training for her to officially make the team. She played two seasons there, competing in the Champions League and finishing runner-up in the Russian Women’s Football Championship.

Americans (and English speakers, for that matter) are hard to find in Russia. Edmonds adjusted well, though.

“At first, it was a little shock to my system and I was a bit homesick. But once I kind of accepted the fact that I would have to learn their culture and language, and I would just dive into it, I was able to do exactly that: I learned the language a little bit and then eventually I was able to understand what people were saying to me and I was able to get stuff back to them.”

“I loved where I was at. We were about 40 minutes outside of Moscow, so I was able to travel a bit there. And the team I was on was playing in the Champions League, so not only was I able to play in Russia, but I was also able to travel within Europe … which got me to love being there even more.”

Rossiyanka, in her words, were the best team in Russia at the time, just like Stjarnan were in Iceland. Her experiences in the two Nordic countries were similar in many ways, with the new language, cold weather and successful league campaigns; Stjarnan won their first ever league title in Edmonds’ sole season in Iceland.

They were also connected in the new beginnings they represented. Getting to a point where she had the opportunity to travel to those places required months of training and waiting for her agent to call with good news. Stjarnan was the beginning of her pro career. Rossiyanka was the beginning of Edmonds’ second act.

Following her time in Europe, Edmonds would never again have to wait around for the phone to ring. Her agent called after two seasons in Russia with a chance to return to the United States. The Western New York Flash, a manageable drive from her hometown of Metuchen, New Jersey, were interested in her services. She was thrilled to be able to go back home, especially with an opportunity to play in the burgeoning NWSL.

She played two seasons with the Flash, 2014 and 2015, and the club finished seventh both seasons. Western New York, already experiencing business troubles, overhauled after 2015, firing coach Aaran Lines and replacing many of the players on the roster.

Edmonds was one of the players replaced. She was traded in December of 2015 to expansion club Orlando Pride.

“I was over the moon, to be honest,” she said of the trade. “Obviously playing in Iceland and Russia and then Western New York, those are all cold areas. So I was excited to get to a warm weather state, and on top of that, Orlando was a brand new team coming into the league, so it was like I got a clean slate.”

Western New York played one more season as the Flash — winning the championship in 2016 — and were bought by new owners for 2017, moved to North Carolina to become the Courage.

“In any league, as new as our league still is, there’s going to be some trial and error with teams coming in and some having to drop out … If some teams have to move to keep the league going, as long as it’s in the league’s best interest and we keep moving forward, I think it’s all good things.”

Orlando has been a positive for Edmonds, the biggest jump her career has seen since she built herself back up in Russia. The crowds are big, the team is successful and the goals are coming — she has six goals since 2016, easily more than she had elsewhere.

The success came with a USWNT call-up in October of 2016, her first. The original phone call was so surreal that she thought it was a prank.

“I actually called my agent and I was like, ‘Is this real, or is somebody pranking me?’”

She was sleeping when the call came because she was on the east coast and the USWNT was out west. She listened to a voicemail that only became real when her agent confirmed it.

The call up was the crowning achievement on a wide-ranging career. At 31, Kristen Edmonds has carved out a spot as a Pride regular. She took the path less traveled and became a textbook example of a late bloomer, succeeding despite that 2011 day in Iceland.

She went from Planet Fitness to the Orlando Pride, a journey matched by few.

“At any point, any time, any day, this can all end. I appreciate every second I step on the field, touch a soccer ball. I will cherish every moment.”